Housing Wonks Need to Ask and Answer the Questions

Over the past month, I’ve traveled quite a bit, at least based on my history (remember that I’m an appraiser). Admittedly these Housing Notes have suffered from a lack of way too much content, so I am trying to remedy that starting now by playing a little catch-up. Trips included Boston, DC, Dallas, Chicago and last night; my plane landing felt something like this:

But its good to be home.

Many of my readers have been closely following the iconic real estate family’s very public divorce trial: Macklowe v. Macklowe chronicled with particular intensity by E.B. Solomont of The Real Deal where my name gets mentioned a time or two. It’s an epic read.

Last week the national residential appraisal organization that I am currently president met in Dallas for our annual conference – RAC– an organization of the best residential appraisers in the U.S. – had a guest speaker that specialized in expert witness testimony. The presenter gave us an example of a “Texas Style” deposition which was awesome. The lesson here: Just answer the question.

Hiten Samtani, Editorial Director, Digital of The Real Deal Magazine does engaging interviews with a wide array of real estate industry notables. This one, with Ryan Serhant of Million Dollar Listing New York, opened with me playing the wonky heavy. It’s a great interview – although the theory shared about the 2012 $88M Weil sale as a trigger to the aspirational pricing era was, uh, mine. 😉

The House GOP has presented a new tax bill that seems to target the U.S. housing market. Although I expected a reduction of the mortgage interest tax deduction, the proposed bill targets high-cost cities in some other ways – perhaps these are merely unintended consequences.

About 7 million homes, including a third of homes in California and 19 percent in New York, would be affected by the mortgage-interest deduction cap if they were put on the market, according to a preliminary analysis by the National Association of Home Builders.

Mark Zandi, chief economist at Moody’s Analytics, said the tax changes could initially cut prices by 10 percent in expensive markets and 3 percent to 5 percent across the U.S.

“You can see why the industry is not too excited by all this,” Zandi said. “It’s not good for home sales, house prices or new housing construction.”

and it limits the property tax deduction for real estate taxes:

Finally, it caps the amount of property taxes that families can deduct at $10,000. This, too, mostly affects the wealthy; it’s sure to be felt in some tony New York, New Jersey, and California suburbs.

The bill undercuts the mortgage interest deduction in another, more subtle way, by doubling the standard deduction that all Americans can take, to $24,000 for couples. As a result, fewer taxpayers are likely to itemize, which will reduce the tax advantages of owning.

I’ll bet lobbyists for NAR, NAHB, and others are going to be working overtime through the end of the year because this will reduce affordability to the middle class, not just the wealthy. However, based on experience, this bill will probably see major modifications if it were to eventually pass.

The average Canadian household takes 353.6 months to save for a downpayment in Vancouver, the city that began the foreign buyer tax remains quite the affordability outlier. I did the math – that’s a mere 29.5 years! 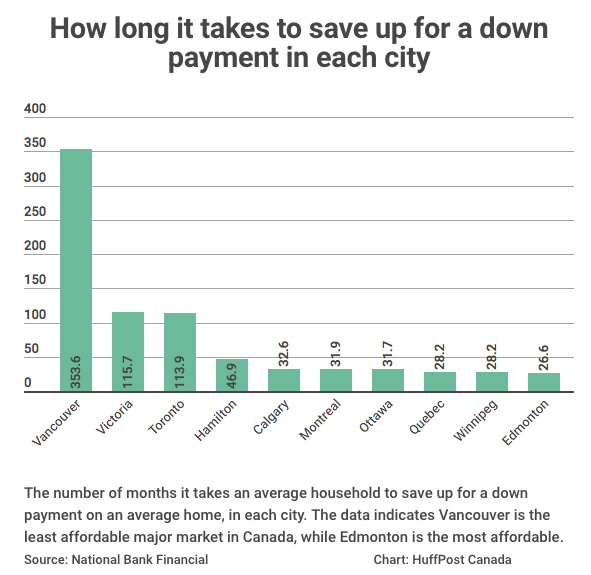 Here are a bunch of new reads on the topic.

Michael Dell just bought a new Boston penthouse condo under construction for $40 million, breaking the existing record by $5 million. But that’s less than half the cost of the $96 million 4-parcel Manhattan assemblage by a Russian Oligarch – and that doesn’t include construction costs so this could very well exceed $200 million when it is all done. Now we’re talking London numbers in Manhattan. A Hong Kong home just sold for $140 million and a $52 million Manhattan townhouse just sold (2nd highest on record for a residential townhouse). Oh, and Palm Beach just gained a $105 million listing per WSJ: 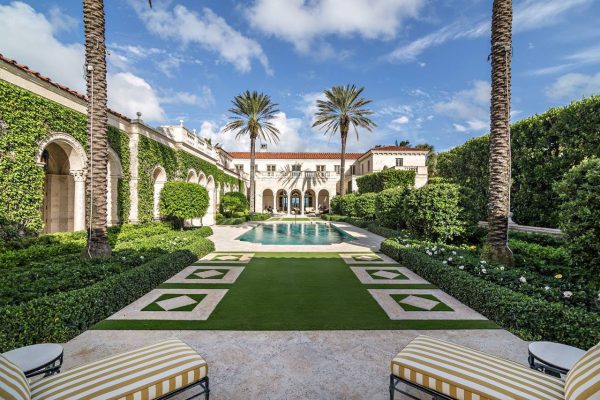 Although Manhattan luxury brokers are fretting, I think in many cases, the pricing of their luxury listings came on too high because sellers took the good news about luxury earlier this year and opted for the aspirational pricing path. That’s a mistake.

Let’s Have A Real Talk About Supply and Demand

Existing home sales stats were recently released and volume weaker on a year over year basis. Inventory scarcity is choking off sales and pushing affordability lower.

“It was a continuation of this theme of low inventory really being the burr in the saddle of this housing market,” said Daren Blomquist, senior vice president of communications at ATTOM Data Solutions.

Part of the insanity is the rapid pace of sales, with the median days on market at a record 3 weeks, the fastest marketing time since the NAR survey began in 1987.

Here’s a quick interview I did for Bloomberg Radio with Denise Pelligrini: Is Manhattan Becoming More of a Buyer’s Market (00.59)

Because Everyone Aspires To Buy Hallway Space

Our appraisal firm values common hallway space in co-ops and condos on a regular basis. Conceptually its a bit of a stretch for those outside of NYC to grasp how common these transactions are (pun intended). Here is an explainer and a semi-related discussion on what to do if the hallway smells.

From my Matrix Blog

This title is way too wonky but I found it hard to pare down. It’s easier to explain visually.

When I complete my research for Douglas Elliman in a particular housing market and the percent change in the overall median sales price doesn’t fall within the individual submarkets like averages do, I periodically receive inquiries from media outlets or real estate professionals to clarify. Many people see median sales price much like they see average sales price: proportional.

In this case, the median sales price change for resale to new development ranged from -23% to +1.9% yet the overall median increased 9.3…clearly outside of the range both submarkets established.

So I whipped up the following infographic with sample sales transactions and applied median and average sales price to illustrate how median sales price percent change for the overall market might not always fall within the individual submarket percent price changes. However, in an “average” analysis, the overall result will always fall within the range of the submarkets.

I hope the following color-coded breakdown below helps illustrate this clearly – be sure to click on the image once to expand or a second time for the extra large version. 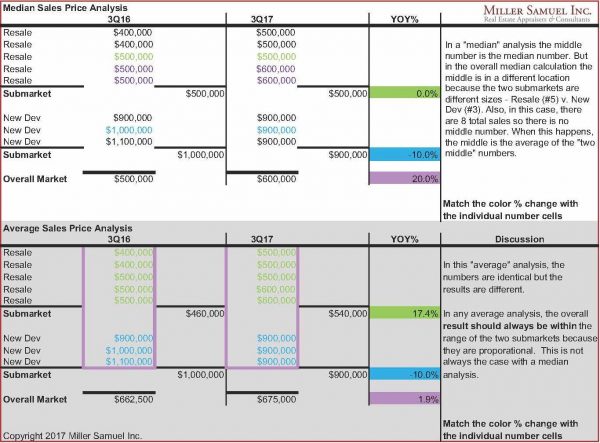 Two important NYC hyperlocal news outlets were shut down by ownership after their journalists voted to unionize. I remember when AOL bought Huffington Post for $300M+, and much of the content was provided by writers for free. No-one shared in the big payday yet they created the content. This latest event is a big loss of information to the community and housing is just one piece of it. I am hoping this is just an attempt by ownership to stop the writer’s efforts to unionize, but that’s unlikely. The void in quality local news coverage is huge because the remaining news outlets seem to be aggregators, simply repurposing the news from other sources.

Here are some fun Crayola-inspired looks into markets we cover: 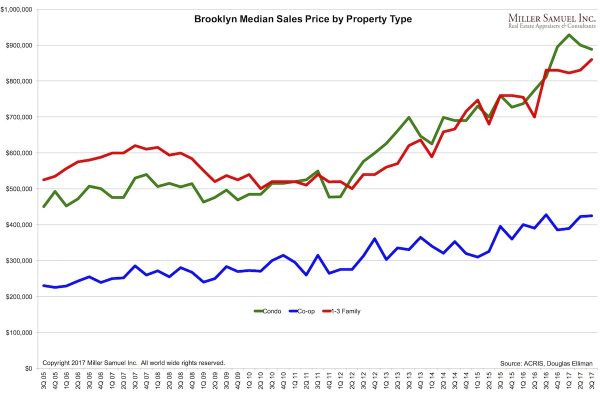 AI National Is Traveling Like There is No Tomorrow, But With 5 More German SRAs

The following text was sent to me from an AI member who received this in an AI newsletter. I have already been told much of national executive travel is typically done via first class with wives or colleagues accompanying. I’m sure all U.S. AI members are glad that 5 members in Germany earned their SRAs. If the visit entailed 6 (the 3 members listed as attending and their wives) first class tickets and more than one night for at least 3 rooms at a 5-star hotel, plus dinner, ground transportation, etc. it will take quite a while for the new membership dues from these 5 new German SRA members to cover the cost.  If there are 5 more SRA members from Germany added next year, it is reasonable to expect the same travel expenses to occur.

In earlier posts, a chart based on AI National data suggested there was a 3,000 member annual decline at mid-year 2017 to 15,000.  This announcement reflects little awareness of the troubling situation confronting the organization.  Why isn’t all international travel placed on hold for national executives until the drop in membership is stopped?  I don’t disagree that international discourse on valuation plays a role at some level, but maintaining priorities by fixing member criticisms are much more important and in fact, likely urgent.

The backslapping pride embedded in this letter for all the great stuff they are doing for their members reflects an insulation from the real world that their members face every day. The reality is that this propensity for travel looks a lot like self-dealing that continues to run unabated. Do you really think this type of travel volume hasn’t been in place for at least a decade?  Or did the national executives say to themselves “we’d better ramp up first-class travel for speeches around the globe to save our organization.”?  Unlikely.

Here is what the Jim Amorin newsletter said (the AI National execs and locations in bold are my emphasis):

In keeping with the Appraisal Institute’s commitment to convey its thought leadership to real estate professionals and others, Immediate Past President Scott Robinson, MAI, SRA, AI-GRS, presented at Valuation Expo, Oct. 2-4, in Las Vegas, on “Reconciliation of Value.” AI also exhibited at this event.

Additionally, I was joined by President-Elect Jim Murrett, MAI, SRA, and Vice President Stephen Wagner, MAI, SRA, AI-GRS, at Expo Real, Oct. 4-6, in Munich, Germany. We were able to extensively market our organization, and provide information to attendees at one of the world’s largest real estate conferences. Also, five German members received their SRA designations at an evening reception.

Scott also represented AI at the American Society of Appraisers’ International Appraisers Conference, Oct. 7-10, in Houston, and at the Federation of Valuers, AC (commonly known as FECOVAL) Congress, Oct. 10-13, in Tampico, Mexico. He also presented at The European Group of Valuers Association (commonly known as TEGoVA) Fall Conference, Oct. 26-28, in Marseilles, France, on “AVMs vs. Appraisals: A U.S. Perspective.”

Stephen joined me at the Association of Appraiser Regulatory Officials (commonly known as AARO) Fall Conference, Oct. 13-16, in Washington, D.C., where I participated on a panel discussing “Appraiser Independence and AMCs: Is It True Independence?” Stephen and Amy C. McClellan, SRA, presented on “Appraisal Review for Appraiser Regulators” at the AARO event. I also delivered a presentation at the American Bankers Association’s State Issues Summit, Oct. 27, in Chicago, on “The State of the Valuation Profession.” International Relations Committee Chair and AI past president Ken Wilson, MAI, SRA, spoke at the Union of Pan American Valuers (commonly known as UPAV) Conference, Oct. 24-27, in Punta de Este, Uruguay, on the “Appraisal Institute Body of Knowledge.”

If you need something rock solid in your life (particularly on Friday afternoons) and someone forwarded this to you, or you think you already subscribed, sign up here for these weekly Housing Notes. And be sure to share with a friend or colleague if you enjoy them. They’ll help you land softly; you’ll keep your anger in check at the deposition and write another Housing Note next week.

Over the past year, beginning with this NY Times piece: Black Homeowners Face Discrimination in Appraisals that initiated a rising progression of news stories covering discrimination in the appraisal of houses. So I looked at U.S. labor force data from… Read More