Innovation And Parental Consideration From Housing

This is some kind of serious COVID Halloween workaround with an extra treat given to the parents.

I wanted to give a shoutout to my excellent Columbia Grad students who participated in my first Zoom lecture on the nuances of market analysis. Here’s a tip: you don’t need to concern yourself with the “Appraiserville” section down below where I bring transparency to the appraisal industry, especially with the larger institutions that influence it. But by all means, feel free to read at your leisure.

I’ve been the author of the expanding Elliman Report series for Douglas Elliman over the past 26 years. Starting in Manhattan in 1994, our coverage expanded to the Hamptons which has always been interesting – largely because the market is joined at the hip with Manhattan and Wall Street. So it was interesting to see the Hamptons set a record median price of $1,200,000 in Q3, above $1,100,000 in Q3 for Manhattan. The idea that a luxury vacation market would outperform a primary market that it depends on, during a global economic and health crisis, is astounding. 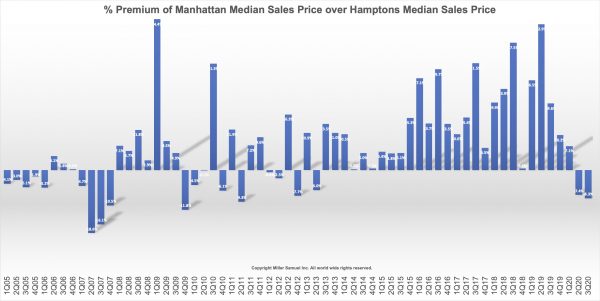 Wall Street has been fascinated with the Hamptons for years as evidenced by the #9 most read ranking by the 350K Bloomberg Terminals subscribers who read the Bloomberg piece: Hamptons Home Prices Soar to a Record in Rush for Beach Retreats.

But more importantly, the story was a chart two-fer! 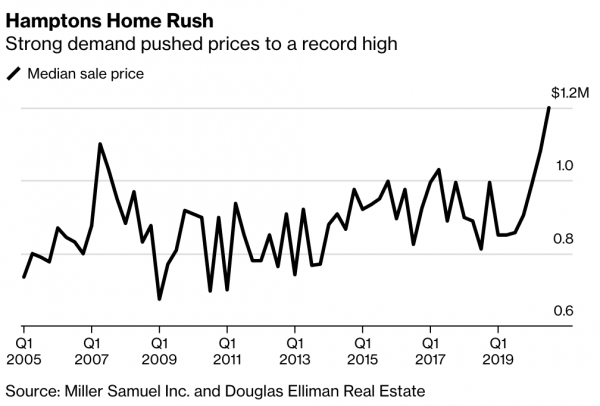 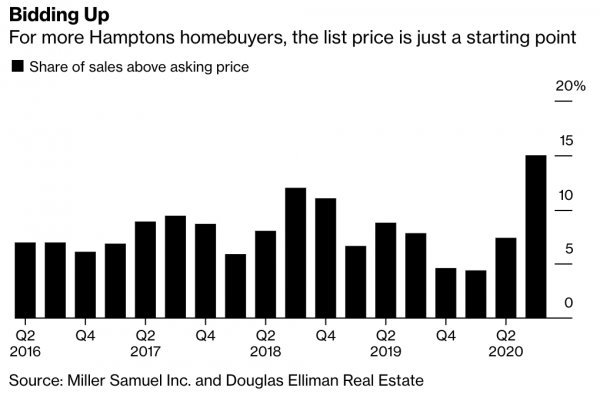 The Wall Street Journal had a great piece as well (with a chart, obviously) – In The Hamptons, Sales of Homes Priced at $5 Million-Plus Jumped 291% Last Quarter 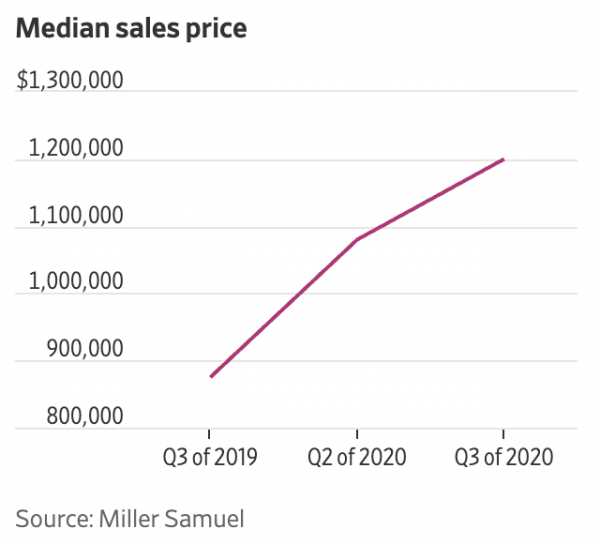 Here are the reports for the East End and some of the key points for the Hamptons (and North Fork): 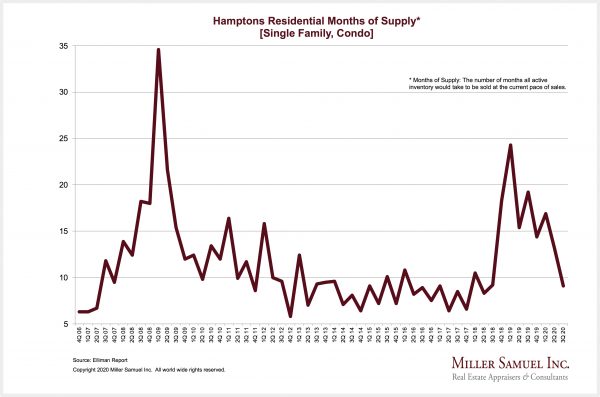 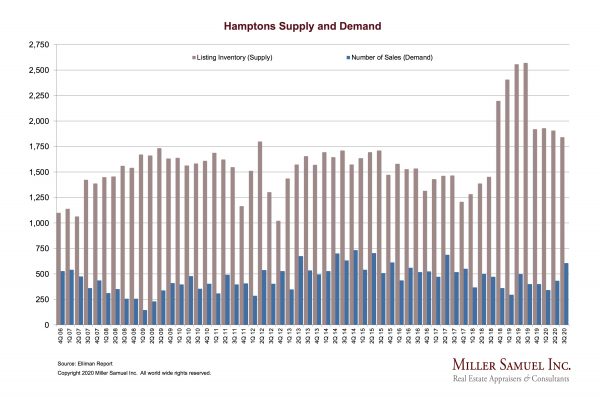 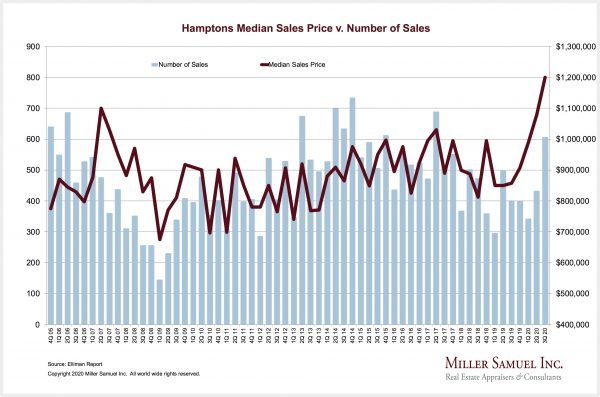 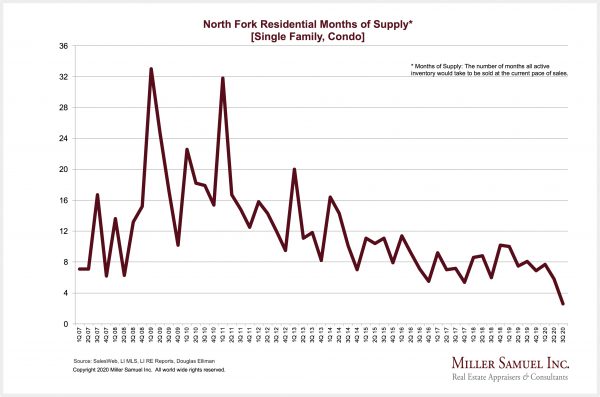 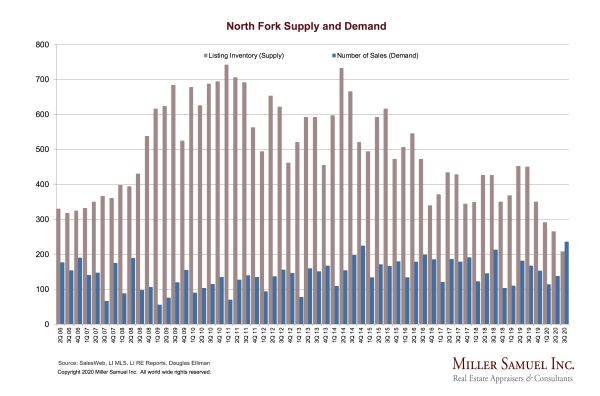 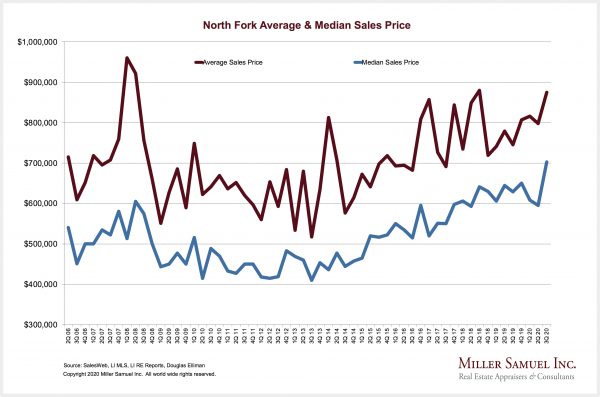 There was a great Newsday piece Bidding wars drive LI home prices to new highs as inventory plummets that talked about the state of the market in the third quarter. This was a great quote that provides a sense of conditions on the ground: 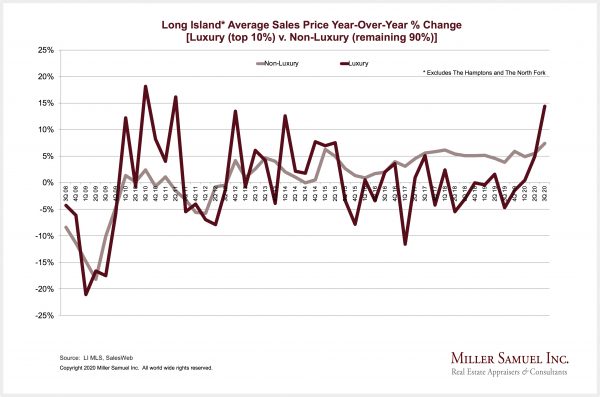 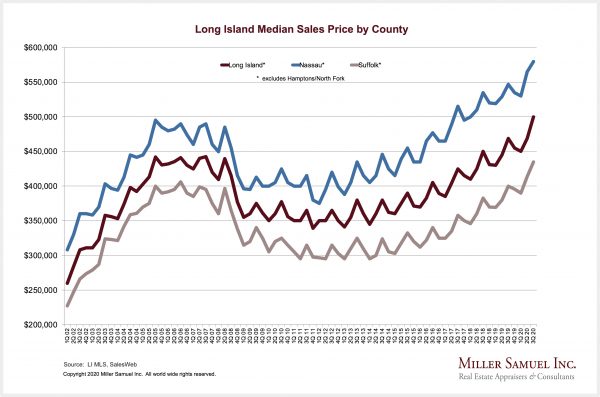 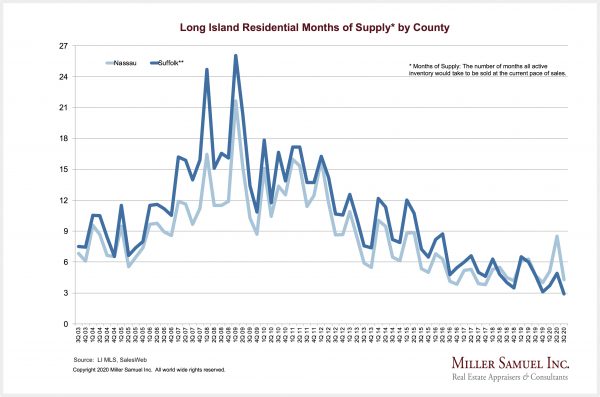 CNBC TV: The Rise of the “Co-Primary Residence in the Hamptons

The Hamptons had a record-setting quarter, benefitting from the disruption caused by COVID.

In nearly all the U.S. housing markets I author Douglas Elliman’s New Signed Contract Reports since the lockdown ended, the year over year increase in activity has been rising faster than lower-priced segments. NPR has a story on this phenomenon.

Since I ran out of time to provide an in-depth presentation for other housing reports released this week, here are some charts. 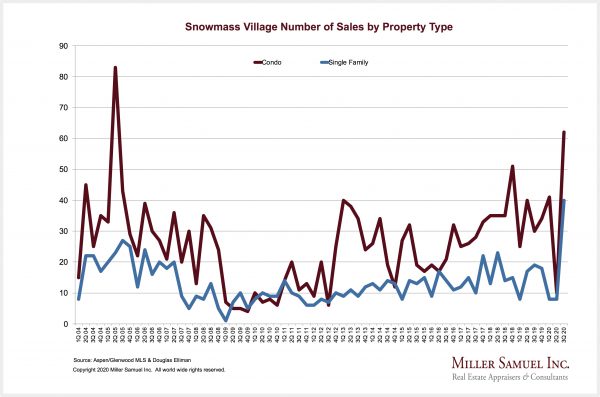 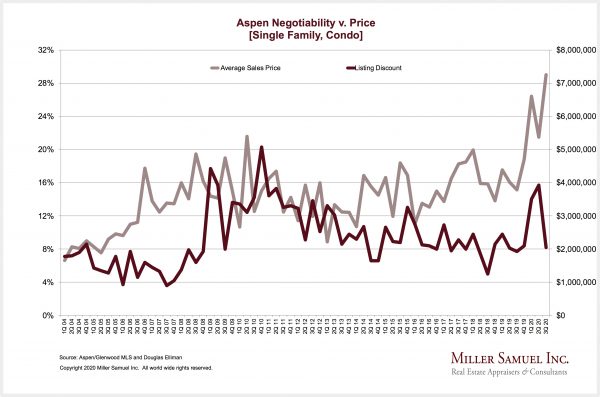 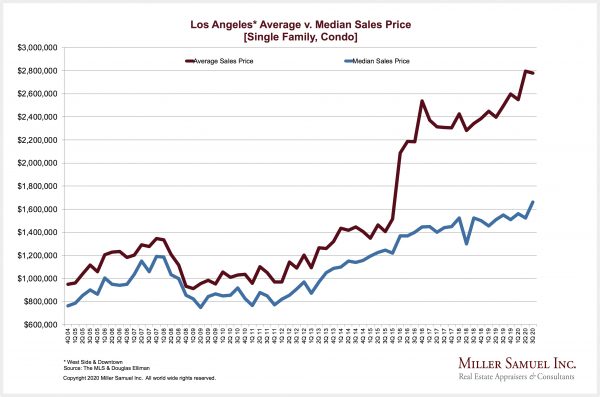 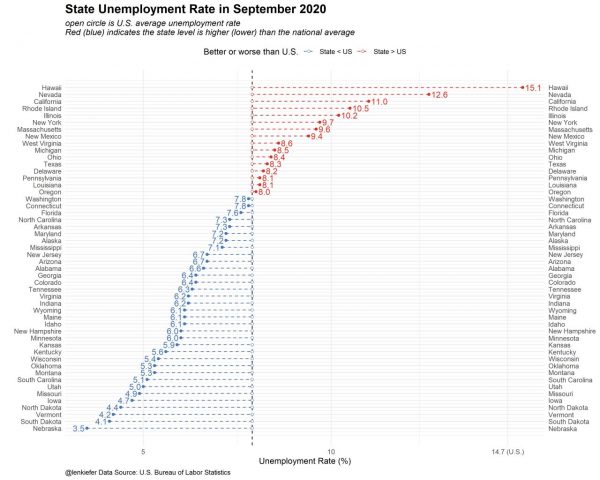 Echoes of the Sham Petition Process are alarming – The following sequence seems astoundingly corrupt. This time series has been confirmed by a number of highly credible sources.

In 2017, Appraisal Insitute CEO Fred Grubbe essentially resigned in the middle of the night without warning. Apparently, people close to Fred were stunned by the lack of advanced warning.

In 2018 AI President Jim Murrett appointed Scott Robinson, former AI president, to lead a CEO Search Project and all of his 8 team members. At the Nashville national conference, Murrett said on stage that the Board of Directors selected the team, and then soon after he got back on stage to essentially say he was confused and meant to say that he picked everyone – it is widely assumed that Murrett is an FOJ (Inner Circle Friend of Jim Amorin) and most of the selections were also FOJ.

The team was comprised of:

Jim Amorin was interviewed early on but not selected, largely because he had no CEO experience of a large organization, except for his interim term after Grubbe resigned unexpectedly. This is an important concept later when I discuss his compensation.

The Board of Directors was about to ratify the new CEO selected by the CEO search team when Jody Bishop (now, surprisingly the AI vice president) made a motion to reconsider Jim Amorin who was passed over for the job by the committee.

And Michael Tankersly seconded the motion. You remember Tankersly, right? He was the guy that had no qualms with being personally selected by Jim Amorin to run against Craig Steinley who had already been selected by the National Nominating Committee and announced in public.

And then, as if magic…AI makes this announcement (bold my emphasis):

The CEO Search Project Team, composed of distinguished AI professionals, worked with Kansas City-based Tryon & Heideman, LLC, a third-party executive search firm, for nearly a year to consider more than 140 applications. Their combined meticulous and thorough vetting process included extensive research and comprehensive interviews that formed the basis of their report for the Board to consider. After conducting our own in-depth interviews and 10 hours of intensive discussion over two days, we concluded that Jim is best suited to be our CEO and hired him accordingly, as is our responsibility in the AI Bylaws.

And voila! Jim Amorin was made CEO!

Jim Amorin Seems Wildly Over-Compensated Given His Lack of Experience

At the Nashville conference in 2018, Jim was made CEO and given a 3-year contract. His 2018 compensation was reported to be $451K yet at the time, the CEO of CCIM, a similar-sized trade group (13K members versus 17K members), was paid $316K, with significantly more previous CEO experience. By doing a correlation, the CFOs of CCIM and AI both made $221K. Why would AI pay Amorin as CEO a 43% compensation premium over the CCIM CEO?

I’ll show you why. In 2017, executive compensation for AI was 44.3% of revenue while CCIM paid only 27.5%. Bloated compensation in a declining organization.

And in addition, his contract supposedly renews automatically 6 months prior to the start of the next one on February 21, 2021. This means that the upcoming mid-November AI Board of Directors meeting is the last chance the board has to reconsider another CEO. And more incredibly, the 1Q 2021 AI BOD meeting was conveniently scheduled 3 days after Jim’s contract renews yet AI February board meetings have generally been scheduled earlier in February. Coincidence?

And by the way, I’ve been told by several sources that AI may lose as much as $300K this year but Amorin’s contract incentives him for cost-cutting instead of for growing the organization. He has let people go so he may actually get a bonus!

After considering all of this, what does the Appraisal Institute Board of Directors actually do for their membership? There seems to be a lot of FOJ’s and CV-padders on the payroll at this time.

The recurring theme with this organization is the total exclusion of the needs of appraisers by the executive leadership – who pay a lot of dues and fees. AI’s corruption over the past 10+ years has resulted in the significant erosion of the SRA brand in the eyes of the public and the MAI designation is next unless changes are made to leadership. What a tragedy for appraisers. Isn’t this self-dealing behavior subject to RICO?

Appraisal Subcommittee Offers $3M Grant Over 3 Years, But TAF Is Apparently Too Flush To Accept

Why isn’t the Appraisal Foundation taking the ASC grant money to run the organization as they have for 30+ years? Accepting ASC grants has always come with strings attached (because they monitor & review (translation: provide oversight) over TAF to use the money appropriately).

Considering this as well as that infamous “bat-shit crazy” letter, what are they hiding to require this pivot? This anti-oversight pivot make no sense.

Here is the 3-year, $3 million ASC grant announcement that TAF is not taking. 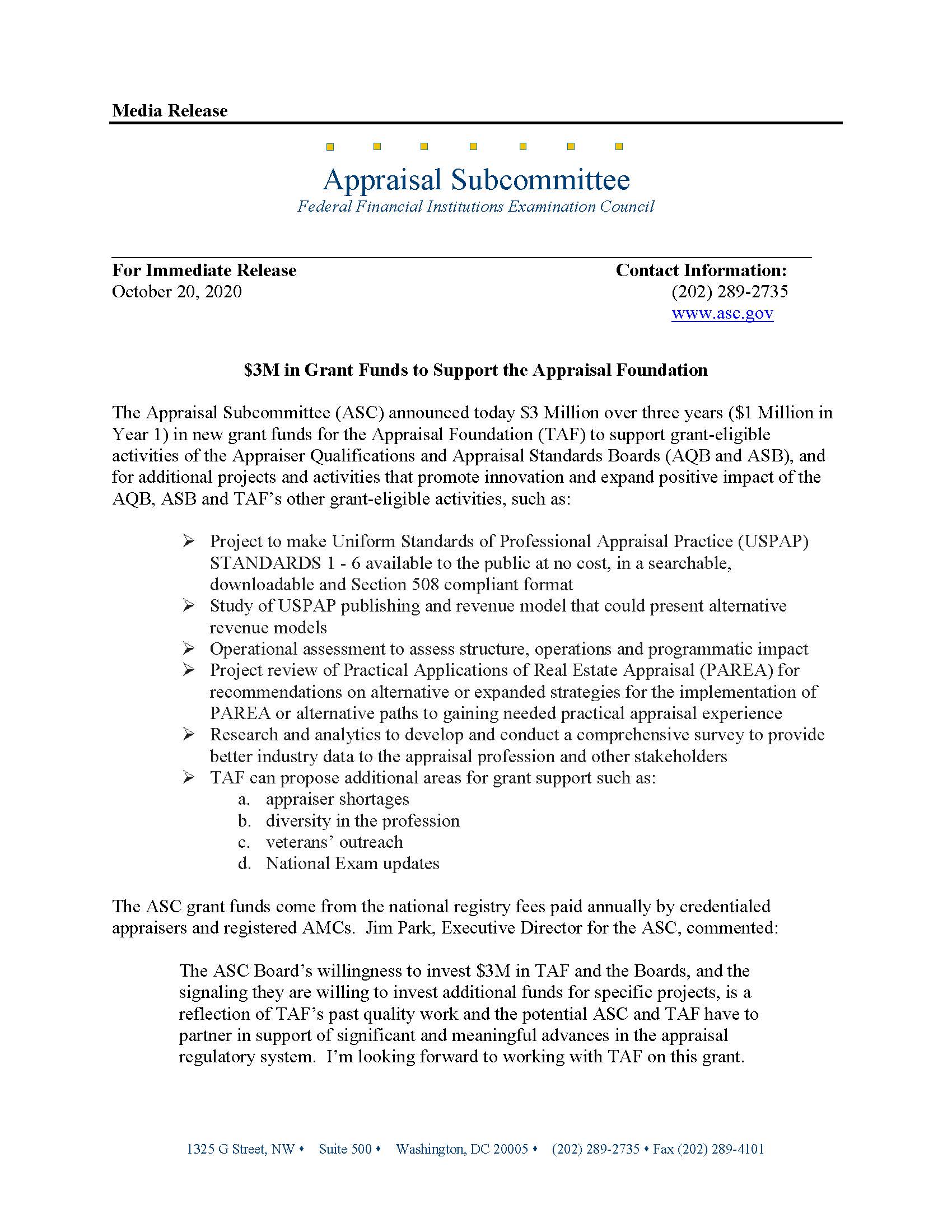 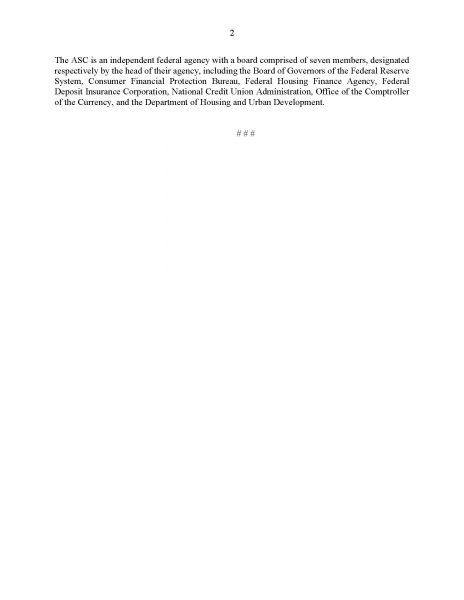 Until I pointed out publicly here in Appraiserville, that AQB, up until the new 2020 appointments, hadn’t had an African-American on the board for over 30-years, and only 3 women. How is that possible? Well…

AQB Board member Bill Fall said this about the lack of mentors at the October 16, 2020 AQB public meeting at about the 1:37:00 mark.

And then look at the makeup of the AQB board.

This board needs a do-over.

I went to share the videos of the Fall 2020 AARO Conference: October 19-21, 2020 but for some strange reason, as of this writing, they were removed. Oh well.

This announcement to publish Standards 1-4 in an easy to use pdf form came about after TAF understood from legal counsel, and what the Cosmic Cobra told us in his book about TAF that USPAP was funded by federal funds and was originally published in the federal registry.

It looks like the remaining standards are being held on to for now as copyright protected.

The TAF workaround for this has long been to present USPAP in a ridiculously impractical format on the internet.

TAF is a non-profit that apparently has so much money, they don’t need the ASC grants because they are finally financially independent? What is going on at TAF?

Phil Crawford of Voice of Appraisal interviews Danielle DiMartino Booth for the show – a must listen!

I’m all about high tech.