Housing’s Total Eclipse On the Dark Side of the Moon

Sometimes we can’t seem to look right at it…

The sun entered a total eclipse over South America for a few minutes👏🏻👏🏻👏🏻 Tag your friends 👏🏻🎈🎈 Via @talkwidtech . Follow @ishetechnology

Douglas Elliman published our Q3-2019 research on the Manhattan housing market this week and boy, was there a lot to talk about. I’ve been the author of a growing series of Elliman market reports since 1994.

Bloomberg
The most important aspect of the coverage is obvious if you’ve been reading these Housing Notes for any length of time…charts! The Bloomberg story on the Manhattan market was the third most-read article on the 350,000 Bloomberg Terminals worldwide, beating “Ray Dalio” and “slowing economy” topics.

Here’s a brief clip on the Manhattan report from Bloomberg Radio.

New York Times
There was a significant article in the New York Times that chronicled this market pivot using our research.

When interviewed, I was inspired to create two charts on the financing aspect of the market. The first chart shows how dependent the share of sales at $5 million or above was dependent on the sharp drop in rates as investors who tend to pay all cash were hard to see. 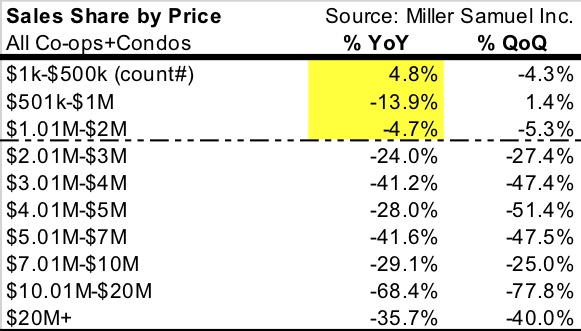 In the following chart, the sales above $2 million fell the most in Q3 as the Mansion Tax poached sales into the Q2 (before the July 1 commencement of the tax) to save a few percent on a substantial purchase price. 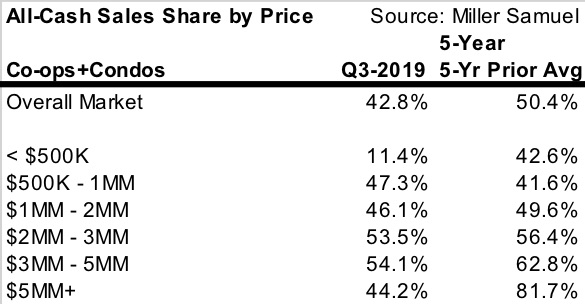 CNBC posted a notable Manhattan perspective story on our research as well, bringing on my friend and colleague Steven James, President/CEO NYC of Douglas Elliman for an interview on NBC Squawk Box who laid out the report results in this interview.

There were other good reads as well including essential coverage by NBC News, Brick Underground and The Real Deal.

“The recent Mansion Tax deadline poached sales from this quarter, back into the prior quarter.” 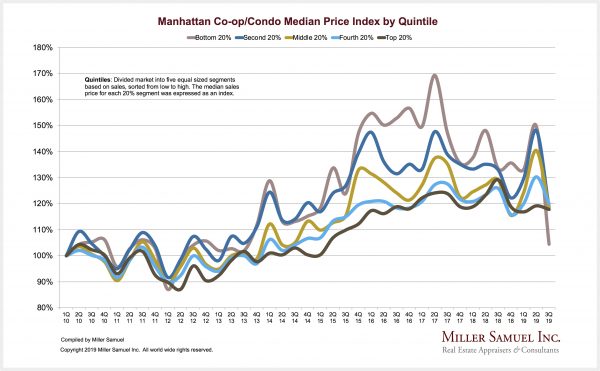 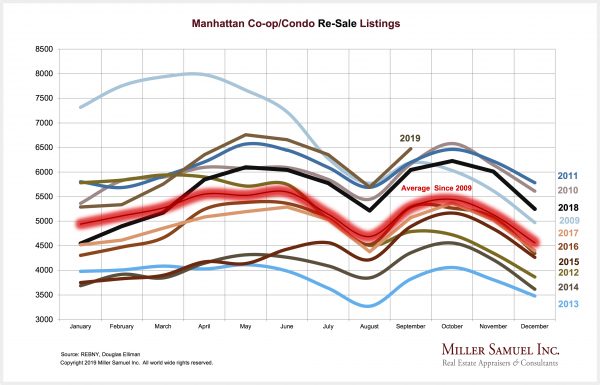 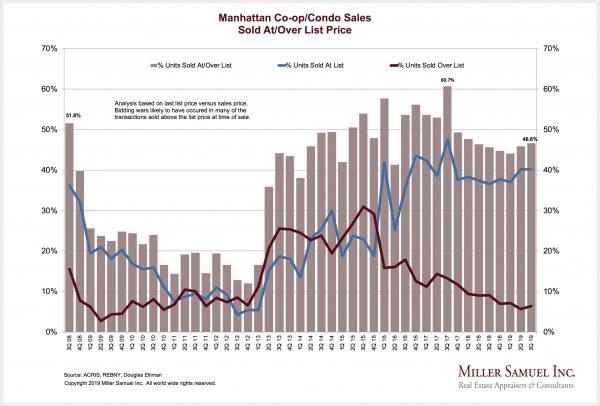 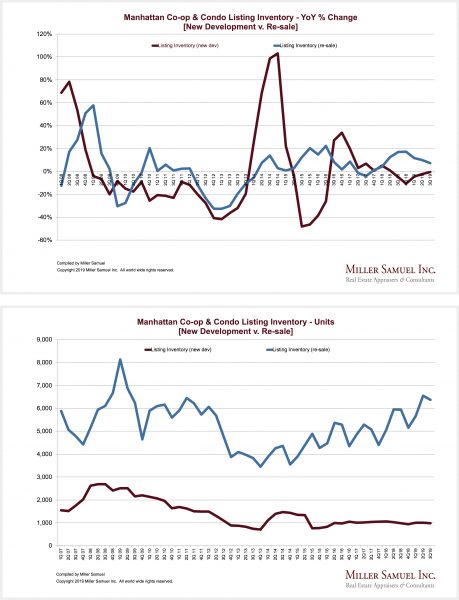 Co-ops & Condos
– Fewest third quarter sales to occur in a decade
– Sixth straight quarter with a year over year gain in listing inventory
– Largest year over year decline in median sales price in more than a decade
– Surge in sales below $500,000 as mortgage rates fell sharply 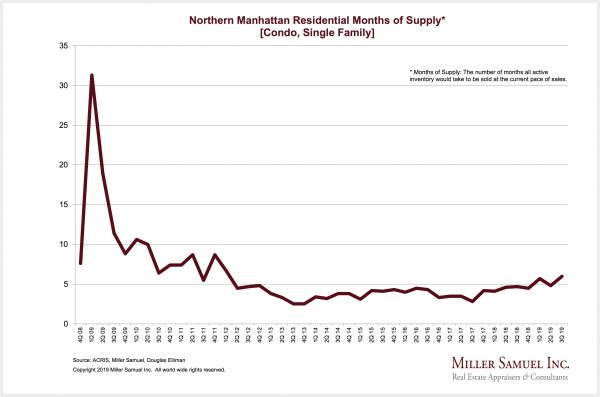 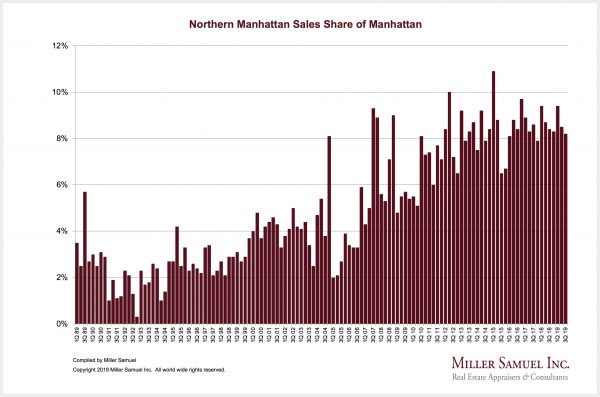 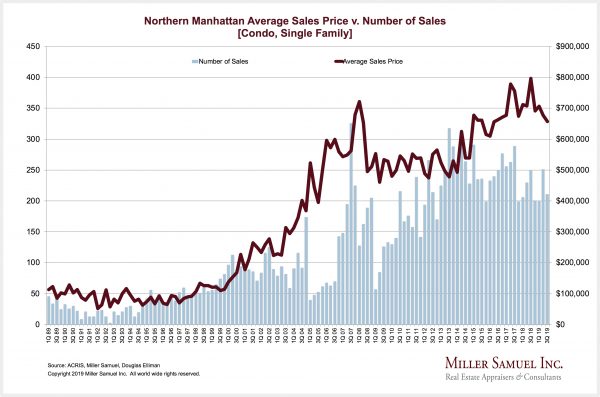 My colleague Bob Knakal, Chairman of New York Investment Sales at Jones Lang Lasalle, has a storied real estate career and has always been a go-to source for commercial market insights including a wealth of statistics. He has published two of four videos on the state of the Manhattan commercial real estate market after the introduction of the devastating new rent law out of Albany last June.

Click on the below images to get to the Vimeo page: 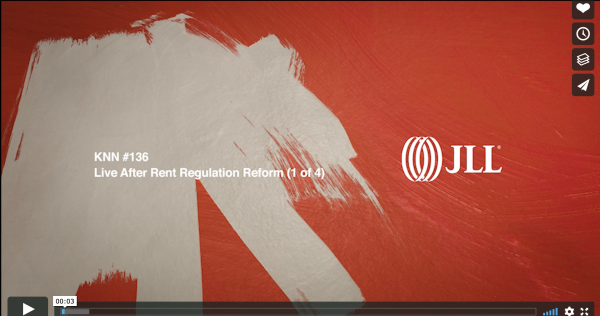 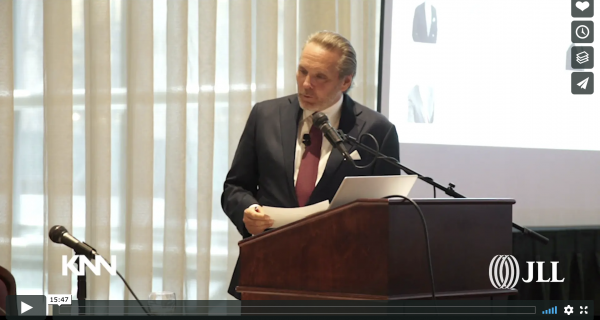 Scott Galloway has no fear and calls out overvalued companies without hesitation. Here’s a great interview of him in New York Magazine:

China Global Television Network provided a good summary on the state of U.S. investment by the Chinese in the following article ‘Chinese cool on buying US properties‘ and the accompanying video where I get a few cameos:

This is a good illustration of the imbalance of the property tax system in the city. It is an incredible quagmire of complications. This becomes even more problematic with the recent introduction of the updated Mansion Tax and rent law that is expected to reduce property transactions substantially in the future. 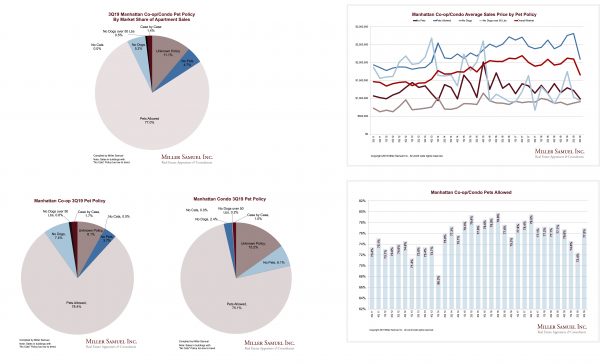 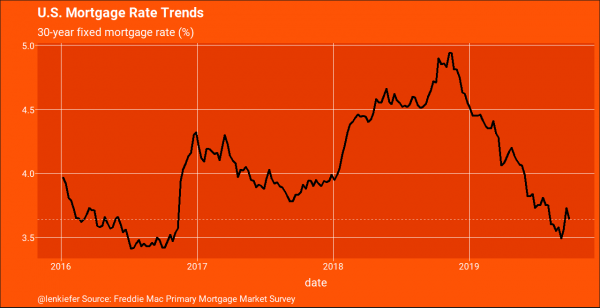 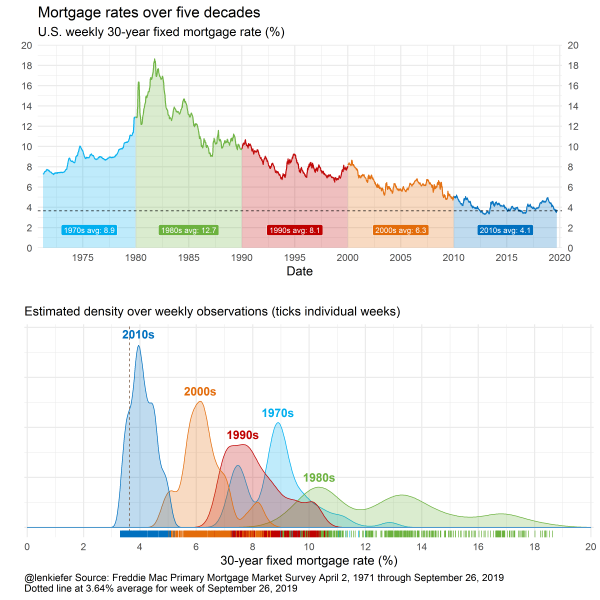 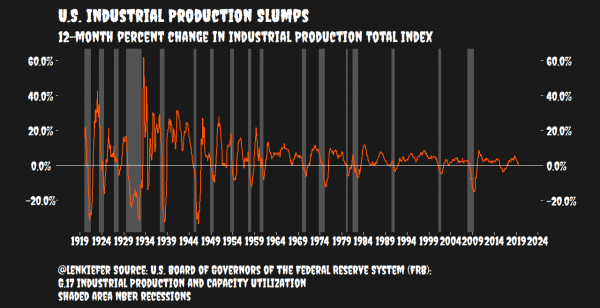 I spoke on the rooftop of the Nine52 new development in the Midtown West neighborhood (a.k.a. Hell’s Kitchen which I suggested rebranding to “Heck’s” Kitchen but it didn’t resonate with the attendees for some reason). The first office of Miller Samuel was located a few blocks away in 1987 and it was not a great place to live – now it is. The transformation has been incredible.

It was a beautiful morning as Ace Watanasparp, EVP of Citizens Bank (and ex-UCONN Huskies hoops player), Howard Lorber, Chairman of Douglas Elliman/CEO of Vector Group spoke frankly about market realities and how to navigate them.

My colleagues in the appraisal industry and I have been confused/alarmed by the actions of the former GSEs Fannie & Freddie over the past several years in their efforts to raise mortgage volume. Banks continue to remain in the fetal position on risk post-financial crisis and low mortgage rates and inverted yield curves aren’t helping. As a result, the GSEs, who remain in receivership, are doing all they can to remove pain points for banks to lend more and as a result, exposing the mortgage process (and, of course, the taxpayer) to unnecessary risk.

As an appraiser, I’m clearly biased to this effort based on my first-hand experience because it has become clear that appraisers are a target of US Treasury’s efforts toward “modernization” which I view as code for “automation.” Think of replacing a large swath of boots on the ground mortgage appraisers with AVMs (automated valuation models) or the equivalent of “Zestimates” but the taxpayer is on the hook if the housing market goes bad. Fannie is already waiving appraisals on 12% of mortgages they take on. No matter what claims are being made today, the reliability of AVMs is beyond unacceptable. For reference, 50% of Zestimates are within 5% of true value and 50% are not within 5%. Junk.

The US Treasury is attempting to return mortgage-finance giants Fannie Mae and Freddie Mac to private ownership. Mark A. Calabria, Director of FHFA, who regulates Fannie & Freddie has been asked what keeps him awake at night to which he has replied “risk management.”

I have heard through channels that FHFA has told the GSEs to kill all the projects that involve “appraisal bifurcation” – the highly controversial process where an unlicensed, untrained inspector completes a non-standardized observation of a property and then a licensed appraiser completes a desktop appraisal. However, I haven’t been able to confirm this in writing as a source so please share if you have.

Appraisers know bifurcation would be a disaster for valuation reliability (i.e. quality) and be more expensive and slower. This is why the appraisal industry is so concerned about the GSEs’ intent to expand the use of bifurcation in the mortgage process. I’m sure there are times when such use is reasonable but not with wholesale adoption. The actual reason for the promotion of bifurcation is to remove a pain-point for lenders in the mortgage process. The idea of lowering costs or reducing turnaround is not something consumers have ever clamored for so such an effort is bizarre, otherwise.

Indy Politics recently interviewed Michael Calabria of the FHFA, the regulator who oversees both agencies.

The Banking Industry Is Driving The Waiver Movement

On its own, the recent decision to provide a temporary appraisal waiver for the entire state of North Dakota is mind-boggling for a number of reasons and seemed pre-determined:

Look at the ASC members and their North Dakota waiver vote on July 9, 2019

Only FHFA and HUD voted against the North Dakota Waiver. Those specific agencies deal with appraisers first-hand and understand their role in the risk management process. The remainder are bank regulators or in the case of CFPD, represent consumer interests (and the agency has been gutted over the past several years to reduce its pro-consumer efforts).

In other words, banks are driving the waiver train. They want to remove a pain point from the mortgage process to grow more origination volume. The Federal government has already proved it will be willing to back up the banks if the economy collapses so why not keep pushing for removing of all pain points?

Bill H.R.3619 has left the House and is now ready for consideration in the Senate.

There are a number of key issues presented in this bill. Three of them jumped out at me:

This definition is critical to help undo the logjam that appraisers face brining more people into the appraisal profession.

This enables appraisers to show the amount of their fee in relation to the AMC portion so the consumer is made aware, of why the cost might seem unusually high. Appraiser routinely recieve only 30% to 50% of what the consumer pays as “appraisal fee” – and why REVAA lobbies so hard to prevent this.

SEC. 6. INCLUSION OF DESIGNEE OF SECRETARY OF VETERANS AFFAIRS ON APPRAISAL SUBCOMMITTEE.
– The first sentence of section 1011 of the Federal Financial Institutions Examination Council Act of 1978 (12 U.S.C. 3310) is amended by inserting “the Department of Veterans Affairs,” after “Protection,”.

This helps address the pro-banking bias on the ASC board as I discussed earlier in Appraiserville.

This GIF by my friend Nathan Pyle reflects the many times I’ve tried to eat a pizza slice on the sidewalk in between appraisals: