Bloomberg TV: Activity Booming in Brooklyn, Picking Up In Manhattan, But Weakness In The Fall is Expected

I joined my friends and colleagues from Urban Digs, Noah Rosenblatt and John Walkup for a fun discussion on the nuts and bolts of the NYC housing market. Moderated skillfully by John who introed me as “NYC Real Estate 2020 & Beyond” as I discussed the market with Noah who introed me as “Jonathan is always right” so you can’t go wrong by listening to this.

Here are the charts I provided that are also in the presentation: 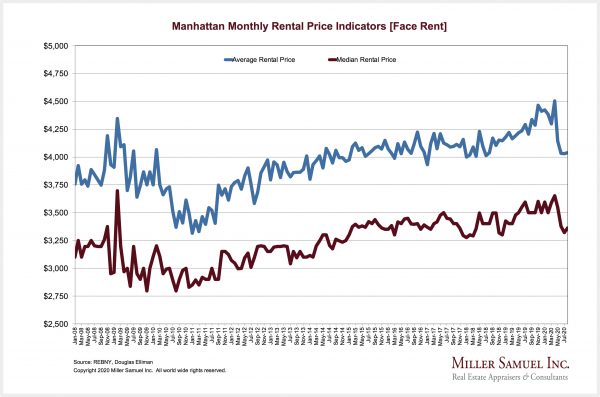 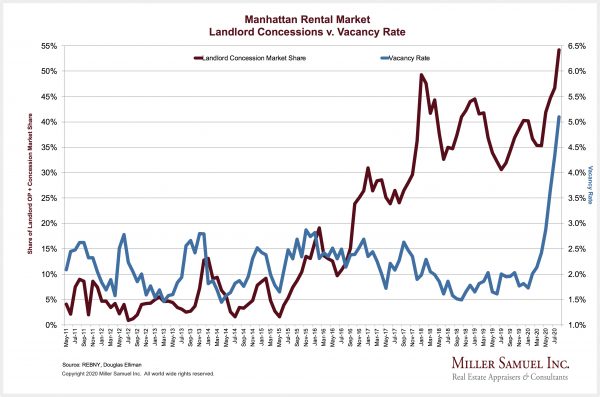 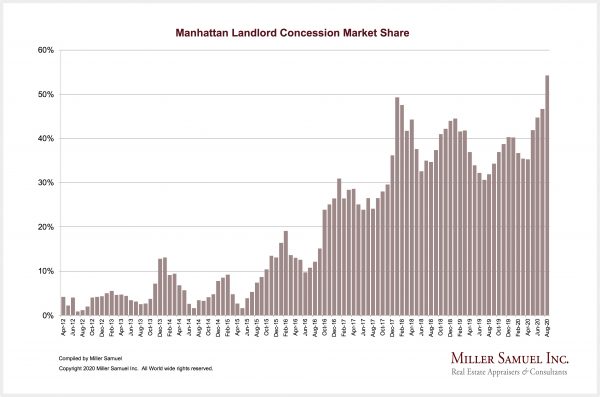 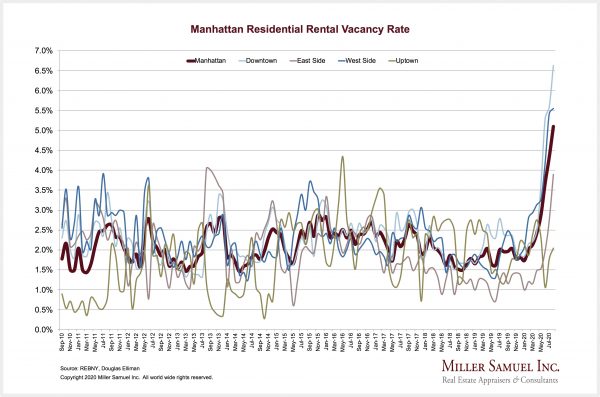 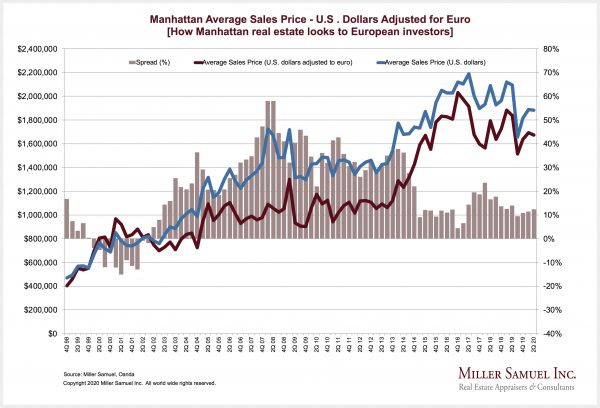 Despite record-low mortgage rates, a vulnerable economy is making access to credit more difficult. In fact, the Mortgage Banker’s Association’s Mortgage Credit Availability Index [9] is at its lowest point in six years. 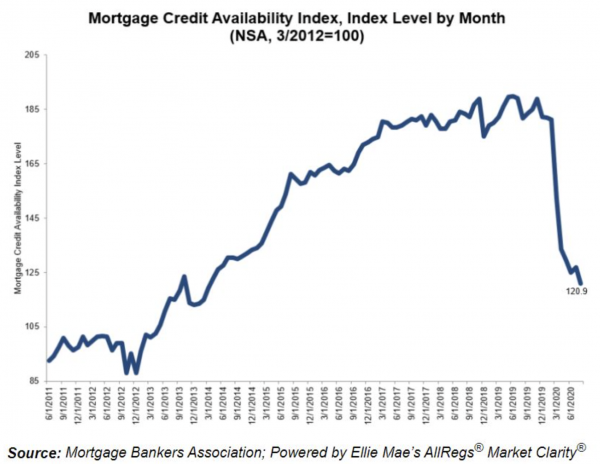 Owning Your Own Island Is Overrated 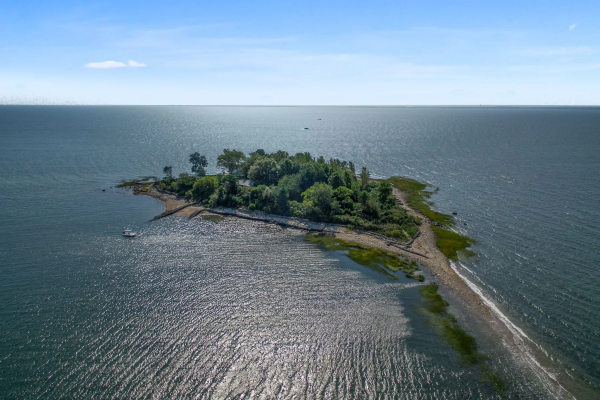 This Sotheby’s listing is a small beautiful island [10] not too far offshore from where I live in Connecticut. I’ve anchored our boat and swam offshore with my family. At high tide, the island becomes disconnected from the adjacent island.

The listing address: 0 Copps Island is the housing pun of all puns. Safety is something I think about whenever I see an “own your own” island listing. The fantasy is privacy but all I can think of how vulnerable an island homeowner could be. What about pirates? FYI tomorrow is Talk Like A Pirate Day [11]. Arrrgh!

As I looked at the interior photos of the home, I imagined how each piece of furniture had to be transported to the island. This island living is a world that means getting a new couch requires a boat. 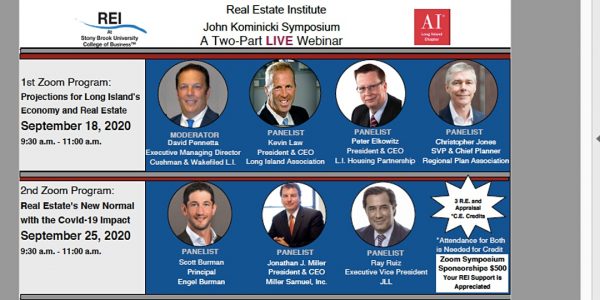 The corrupt petition process used by Jim Amorin, the current CEO of the Appraisal Institute and former 2x president used to override the nominating committee’s vetted choice submitted by the membership is subject to review?

AI wants to explore how to make the election process better.

Here’s my suggestion: add transparency by dropping the sham petition process that was inserted to rig the election more than a decade ago.

Jennifer Marshall has circulated a well-written description of the process, how to respond and the documents needed to form an opinion – a response is needed by September 21st (3 days from now):

First, I want to thank you for actions and support during the recent Vice President (VP) Election. We were successful in having the members’ voice heard when the National Nominating Committee’s (NNC) VP Candidate, Craig Steinley, MAI, SRA, AI-GRS, AI-RRS, was elected as the 2021 VP at the virtual Board of Directors (BOD) Meeting on August 6th.

I want to tell you what has happened since the VP election was held on August 6th.

During that Board Meeting, a number of motions dealing with the election process were brought forward, and out of this a project team (PT) was formed to study potential changes need to the Bylaws and policies & procedures that govern the nomination and election process for AI’s VP. Basically, a top-to-bottom, A-Z analysis will be undertaken with recommendations made by the PT to the Board. The goal is that any changes will be implemented and in place prior to next year’s VP election process.

The PT is soliciting input from members on the entire process and I’m encouraging everyone to send their ideas and input on the process and how it can be perfected. Comments should be submitted to Board Secretary, Joan Barngrover, at jbarngrover@appraisalinstitute.org, no later than Sept. 21, 2020.

I am asking you to step up and get involved again by writing to the PT about the current election process and for reference I have attached the following PDFs:

· Do you think the composition of the NNC is important? Currently, the NNC consists of 1 member from each of the 10 Regions, plus the immediate past president as chair. These individuals serve only one year, before they are all replaced.

· Do you think the NNC process promotes a group that is impartial, independent, and objective?

· Do you think that members are more comfortable communicating their opinions about the candidates with the NNC (than the BoD), since the NNC members typical have no relationship with the candidates?

· Do you think the NNC process works?

· Do you believe that the NNC is the voice of membership?

· Do you believe members should be involved and have a say in the selection of the AI’s future leadership via the NNC process?

· Do you believe that the NNC members should be able to speak with the BoD members and answer questions about the process, if needed?

· Do you think the NNC’s process should be confidential with respect to members of the BoD?

· Do you believe the NNC is acting for the benefit of and on behalf of the BoD and that the vetting process may be openly discussed in executive session by the NNC with the members of the BoD?

· Do you believe there should be a petition process (this allows the BoD to add other candidates beyond the NNC’s nominee(s) to the VP slate – similar to a nomination from the floor)?

· Should the petition only be used as a nuclear option, i.e., used rarely and only in extreme cases, if at all?

· Should the petition process be used by some BoD members for political reasons?

· Right now, 5 or 6 members of the BoD can invoke the petition process (only 20% of the BoD is required). Do you believe the current 20% threshold for a petition is adequate?

· A petition currently does not require reasoning and rationale. Should it require those items if the NNC’s decision is going to be challenged with a petition?

· The current petition process allows the BoD members to sign a petition anonymously. Should the signatories of a petition be allowed to remain anonymous?

· Currently, the petition is only seen and verified by the CEO and the Board’s legal counsel. Should the petition document be completely open to the members of the Board of Directors?

· Should the petition document be completely open to the membership?

· Should a VP candidate that happens to be on the BoD be able to sign his or her own petition as part of the 20% threshold?

· Should the members of the Executive Committee (President, President-Elect, VP, Immediate Past President) be allowed to sign a petition? Currently, those 4 officers comprise 16% of the voting members of the BoD.

· Should a VP candidate that was vetted by the NNC and not selected be able to come back into the election by running on a petition, i.e., a second bite at the apple?

· Currently, there are no restrictions on the questions asked of the VP candidates in a contested VP election. Should all questions asked by BoD members be relevant to the candidate’s ability and vision to lead the organization?

· Do you feel that the invocation of a petition process damages the VP candidate(s) that was/were selected by the NNC?

· Do you feel that the invocation of a petition process damages the individual that is named in the petition since it challenges the candidate(s) that was/were nominated by the NNC?

· Do you feel that the invocation of a petition process damages the credibility and reputation of the AI?

· Do you feel that the invocation of a petition process causes division and fracturing of the organization’s membership?

· Do you feel that the invocation of a petition process provides members and non-members with an opportunity to question the integrity of AI?

Again, thank you for being proactive and taking time to write to the PT. I appreciate all of your time, efforts, and support.

Again, please send your comments on the VP Election Process to: The Board Secretary, Joan Barngrover, at jbarngrover@appraisalinstitute.org, no later than Sept. 21, 2020.

You may also copy your Region leadership, or all of the BoD, on your email (see list below for leadership by Region).

Remember The Good Old Days When TAF Fought For ASC Against AI?

The good old days were just three years ago. AI National was pushing hard to get rid of ASC, likely to get their hands on the AMC registration fees while they were “taking” their own chapters’ funds in order to keep paying for their operating executives’ lavish travel practices. How can it be that now TAF has so quickly sought to team up with AI National?

Back in 2016 during Congressional testimony, The Appraisal Foundation President (TAF) Dave Bunton said of the ASC [19]:

Regarding the effectiveness of the Appraisal Subcommittee, the implementation of a rating system of the State appraiser regulatory programs and the appointment of policy level representatives to the subcommittee have been very positive steps in recent years. However, we believe there are few opportunities for improvement in its current structure.

What changed to warrant such an aggressive anti-ASC stance by TAF?

The following is a 2017 letter [20] from The Appraisal Foundation’s Industry Advisory Council (IAC). The most telling quote from the letter that shows the hypocrisy of the recently termed bat-shit crazy letter [21] (sorry) from TAF to ASC is this:

In conclusion, we believe the ASC plays a vital role in the real estate appraisal industry and any discussions regarding elimination of the ASC or reducing its oversight responsibilities is not in the best interest of the appraisal profession or the consumers of appraisal services who rely upon the ASC to promote the public trust in the appraisal industry. In contrast, we welcome and encourage discussions regarding more enhancements to the ASC system in order to further their important mission. 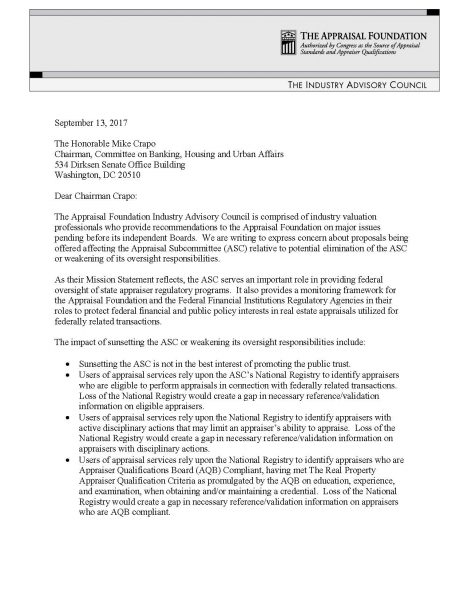 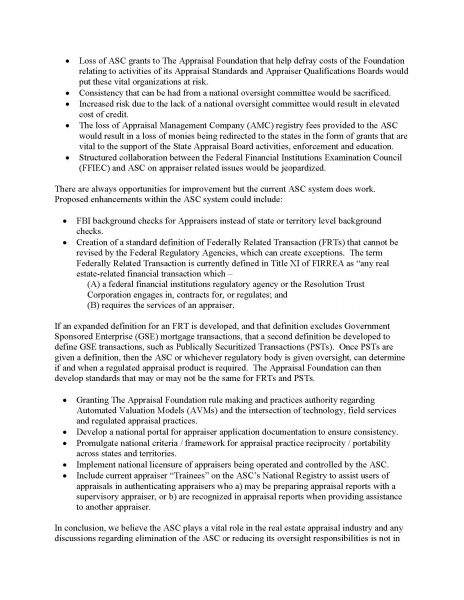 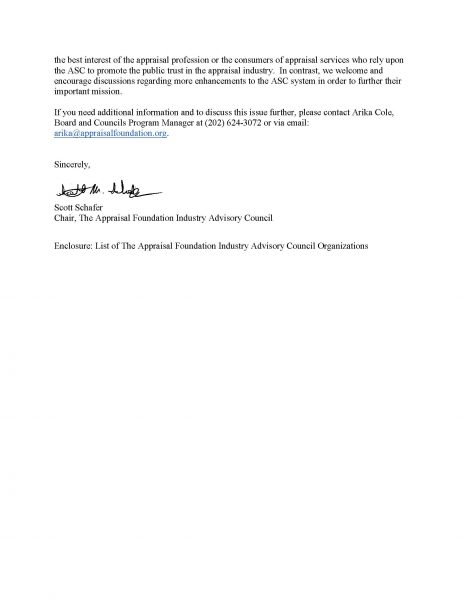 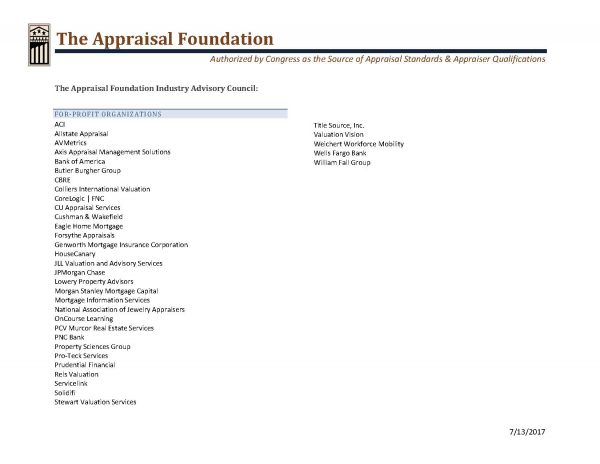 TAF Continues To Deflect and Misdirect On The Discrimination Issue

I believe there has never been a minority member of the Appraiser Qualifications Board (AQB) in its 30+ year history. I am not being critical of the individual board members who have served and who are serving since they are volunteers who have invested considerable personal time in this endeavor. They have a belief in their duty to serve the public trust. But clearly something is wrong in the board member selection process.

Here is an undated photo of an AQB on the TAF web site.

And Dave Bunton’s TAF newsletter seems to be hard selling this point despite (this technique is known as deflection) the absolute failure of the organization to have adequate board representation for minorities and women. It shouldn’t be this hard. 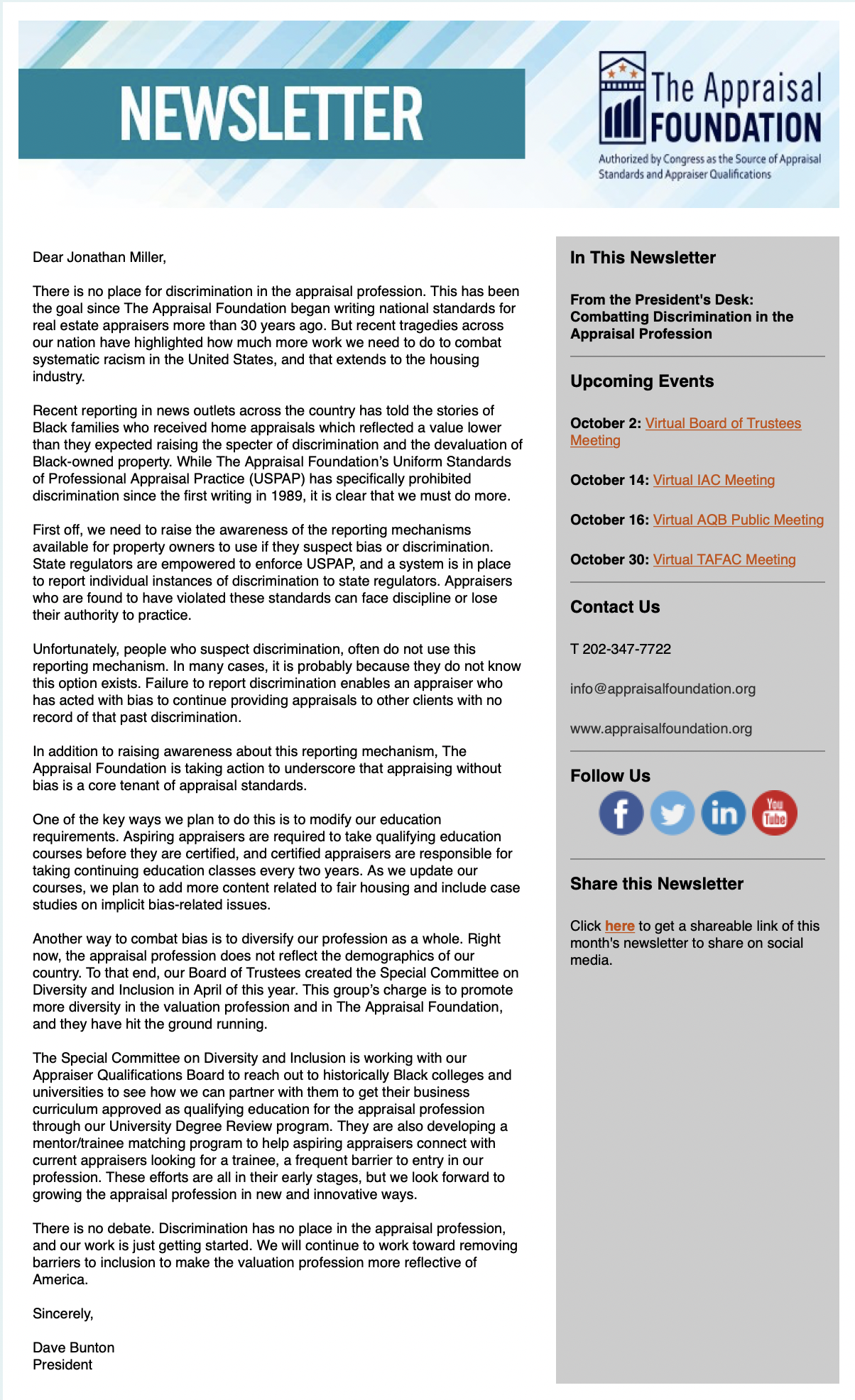 The opening paragraph of Dave’s letter shows the hypocrisy of TAF on the issue of fighting systemic racism as a goal since day 1:

There is no place for discrimination in the appraisal profession. This has been the goal since The Appraisal Foundation began writing national standards for real estate appraisers more than 30 years ago. But recent tragedies across our nation have highlighted how much more work we need to do to combat systematic racism in the United States, and that extends to the housing industry.

Common sense dictates that if there hasn’t been a minority board member on the AQB for three decades, there is a structural problem with the way board appointments are made.

I’ve seen so bad chainsaw behavior in my lifetime (aside from Texas Chainsaw Massacre) but cutting down a tree from the bottom takes the trophy (audio is NSFW).

This guy cussing himself out is exactly what I needed today… pic.twitter.com/Qocl7FWTep [23]

If you need something rock solid in your life (particularly on Friday afternoons) and someone forwarded this to you, or you think you already subscribed, sign up here for these weekly Housing Notes [25]. And be sure to share with a friend or colleague if you enjoy them because: