The Rats Are Winning

The second I clicked on the movie trailer based on Michael Lewis’ fantastic book “The Big Short” I let out a loud “YES!” Aside from using my favorite Led Zeppelin song as the theme music and including nearly all of my favorite actors, the storyline parallels the hell my appraisal firm and I lived through during the build up to the global financial crisis via housing.

During this period, my close knit group of appraiser colleagues around the country and I, who weren’t morally flexible were certain we missed a lot of optional ethics and economics classes back in school. We could never wrap our minds around what was happening during the housing bubble and were never comfortable in our newly created role as “deal enablers.” The financial crisis was a systemic breakdown and every related industry, as well as the consumer, were complicit.

There have been some fantastic documentaries on this era such as “Money for Nothing, House of Cards and NYC Home Shuffle to name a few, but The Big Short is the first big-budget “movie” on the topic I got excited about.

When appraisal firms I knew around the country mushroomed from 3 to 50 or even 100 appraisers overnight and when their principals were doing volume deals with mortgage brokers in the back of limos, I was sure I was going to go out of business because I didn’t “get it.”

Here’s a 2005 interview with CNBC. They approached me after I began to speak out – I laid out the story for them and they dug deeper and went with it. I remember distinctly during this video – being sure I would be out of business by 2008. Some “competitors” soon mocked my “75%” comment in the clip as “sour grapes.” After the collapse of Lehman Brothers in 2008 those firms soon disappeared. Of course appraisers remain under siege today and the 75% comment still applies, but that’s for another Housing Note. Notice the old Mac iSight camera on my monitor. LOL.

AMCs don’t want consumers to know how much appraisers are paid. Why is the appraisal fee lumped in with the AMC admin fee on a mortgage application? This is not in the best interest of the consumer. I don’t know the Brooklyn AMC firm who authored this piece, but their logic for full disclosure of the appraisal and AMC administrative fee is sound. I doubt if many consumers realize that barely half of the stated “appraisal fee” on their mortgage application actually goes to the professional who comes up with the value on behalf of the lender. The other half goes to the clerical aspects of managing appraisers. Shouldn’t sports agents get 50% of the income paid to their athlete clients? Of course not.

Here’s a different sort of explainer piece. I had a fascinating 28 minute conversation for a podcast by the Port Authority of New York & New Jersey on the regional economy and transportation trends – I was the first person outside their institution they approached. We touched on the U.S. issues and I snuck in a Seinfeld joke. If you want a good overview of the NYC metro area, please listen here.

There is no shame in pizza and high end real estate

There has been lots of analysis and coverage on the NYC #Pizzarat in recent days.

While you have the pizza rat in your head, look at these Manhattan listings located nearby. After all, New York City is the most expensive city in the world to live (but hey, it’s worth it since you can easily buy strawberries at 3am). Surprisingly most of these super luxury listings are re-sales, not the new super-luxury condo developments that get most of the media’s attention. Pricing many of these super luxury resales for 50% to 100% more than they last sold just a few years ago make me wonder if most of these will ever sell? Better yet, did the sellers ever think they would sell for these numbers or was it simply an attempt to get their name out there? Whatever happened to shame?

And now that you’re hungry, coal fired pizza is making a comeback. 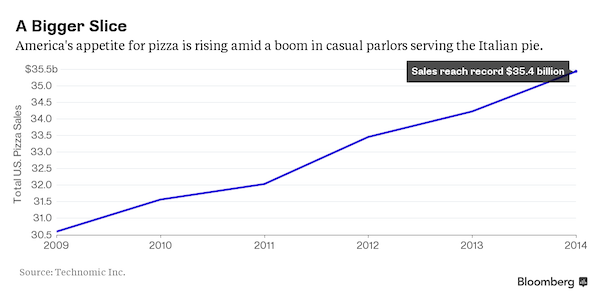 The rental market has a long way to go. The direction is up.

Perhaps the biggest news topic this week concerned the investment in rental development, an outcome of the phenomenon of rising rents. As I frequently say:

Housing is local and credit is national

Tight credit is a key driver of rising rents.

Last week we published and linked out to our monthly NYC rental market research we authored for Douglas Elliman Real Estate. Here are a few charts that may be of interest: 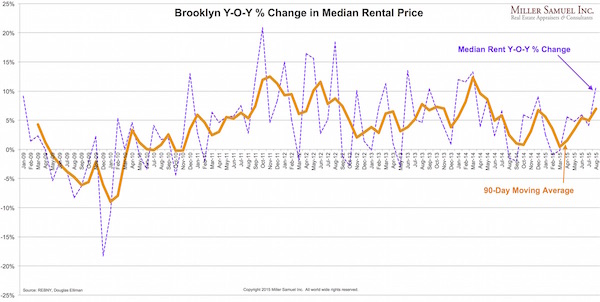 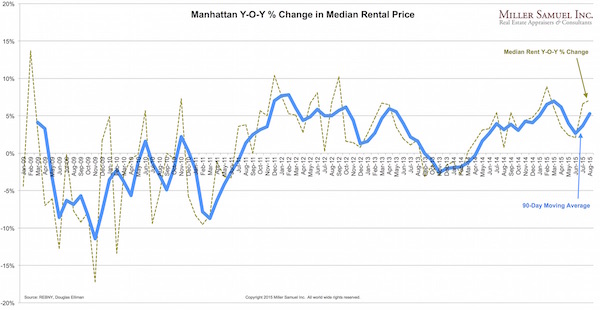 And because credit conditions remain historically tight – yes conditions have eased a bit this year (from irrationally tight to very tight) rental prices keep rising or at the very least, are being held high through the difficulty in obtaining a mortgage.

Obviously thousands of people get mortgages every day but anyone who refinanced or got a purchase home mortgage, got the distinct feeling the lender continued to look for reasons not to lend all they way through the closing. Would-be first time buyers are being turned back to the rental market because of higher credit score requirements (they actually increased last year), tighter ratios and less flexibility on lower down payments. Ironically the Chase mortgage CEO called FHA loans “subprime” quality as some sort of “holier than thou” (my apologies to the Pope) rebranding effort. Chase has received a lion’s share of fines for bad lending practices with more litigation in the pipeline. FHA became lender’s last resort as the former GSEs suddenly got credit religion and cut off a disproportionate amount of lower income citizens from having reasonable access to financing.

Bottom line Tight credit = rising or high rents. Throw in more employment and an improving economy and it’s expensive to rent. If you don’t think credit conditions are easing soon (that’s a whole other conversation), then rental prices won’t be falling soon.

Here’s some interesting coverage on the rental market, much stemming from the recent release by Harvard University’s Joint Center for Housing Studies. Forget condo development (if it is even possible in high land cost cities), developers are getting focused on rentals as a longer term strategy.

As the late Yogi Berra once said:

“You better cut the pizza in four pieces because I’m not hungry enough to eat six.”

If only I could be so clear. Sorry for the long post but I had a lot on my mind.