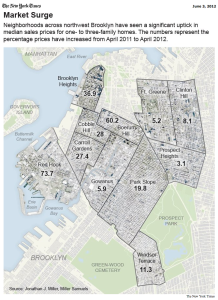 The cover story in the New York Times Real Estate section this weekend: Brooklyn’s Gold Rush [2] chronicled the jump in prices over the past year. Marc Santora pens a good piece that begins with 3 examples of properties that sold over list.

I crunched the year over year numbers for the piece.

“Even when the most expensive sales are removed from the calculations, Mr. Miller said, the surge in prices in striking.

“The theory was that when the credit crunch hit, you would see home sizes get smaller,” he said, “and that is not what happened in New York.” Across the city, he added, space is king.

The spiraling prices are being driven, in part, by the lack of supply. Despite the rising demand, no one is building new brownstones. The number of town houses on the market this spring is about the same as it was a year ago.”