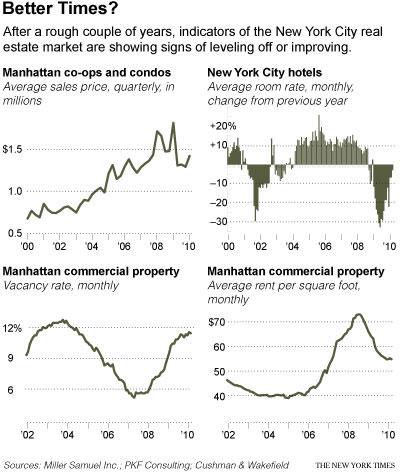 I don’t think I am cut out to be a developer.

While I get the hard work and analysis part, I’m missing the blind optimism part.

And no, I’m not blindly pessimistic either – during the boom years blog commenters periodically accused me of being a shill for the real estate industrial complex [2] (I liked the phrase so much I bought the domain).

Blind optimism is what makes developers successful because everyone tells them they can’t do it. But it is also their downfall because builders build until they can’t build anymore.

Today’s New York Times article by Charles Bagli “Building a Tower of Luxury Apartments in Midtown as Brokers Cross Their Fingers [3]” which announces Barnett’s 1,005 foot condo with a hotel at the base. The site is due south of the Essex House between West 57th Street, a retail corridor and West 58th Street, a service road for Central Park South (West 59th). I’ve got a “let’s consider reality” quote and graphic in the piece.

The project is the first major construction start in New York since the fall of Lehman Brothers in September 2008, and it is an ambitious, even risky undertaking. Unemployment still hovers at 10 percent in the city, which has only just begun to gain back some of the 150,000 jobs lost during the recession. Not so long ago, the real estate industry was right behind Wall Street and the nation’s automakers in crying for a federal bailout.

Access to financing determines when and how something gets built – in this case it was Abu Dhabi since US banks are not interested new luxury condo development given the excess inventory that needs to be absorbed first.

Barnett said “We think it’ll be the nicest project ever built in New York.” Given the proximity and the success of nearby 15 Central Park West – my vote for the best Manhattan condo ever built, I’m guessing that’s the comparison being made. Although recent sales there have topped $6,000 per square foot, the building fronts Central Park and straddles Midtown and the Upper West Side, I’m not so sure its a reasonable comparison to make but I do wish them well.

Remember I’m not cut out to be a developer.