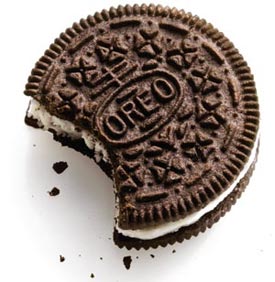 This was a good weekend: both my 9-year and 14-year olds’ respective basketball teams won their games in overtime and the New York Giants beat the Green Bay Packers in OT [1] in sub zero weather to go to the Superbowl in two weeks.

So why I do I feel out of sorts? No, its not because Hydrox cookies are being discontinued [2] [hat tip to The Stalwart [3]]. Hydrox cookies [4] were mediocre at best, while the original Oreo cookies always ruled. [5]

Its that pesky recession talk that keeps coming back to the front burner of economic discourse. I happen to think we are already in a recession, but we just don’t know it yet. Here’s a useful Q & A [6].

Michael Santoli of Barron’s wrote a great piece in his Up and Down Wall Street column called ‘Til Next Paycheck, a Stimulus [7]

Its funny how just 6 months ago, the economy was described more optimistically [8]. I have been concerned about the economic impact of a housing slow down leading to a recession [9] and the disconnect with federal policy makers for quite a while.

Most recessions are consumer driven, which makes sense since the consumer accounts for more than 70 percent of total spending. The 2001 slump, on the other hand, was driven by a sharp cutback in investment in equipment and software following a technology bubble, with too much money allocated to too much fiber-optic cable for which there was no possible use.

So what will the 2008 recession look like? Driven by home- loan defaults, falling home prices and cascading credit problems at financial institutions that have the potential to curtail lending to the rest of the economy, the recession may look something like the one in 1990-1991, which came on the heels of the savings and loan crisis.

Daniel Gross at Slate has an interesting take [11] on recession perspective. A recession will:

Whatever your spin or take on it, the markets seem to be showing recession concerns [12] right now.

Its now overtime for the housing market. Housing may have been the last straw or the straw that pushed the US economy into recession [13].

Even ample supplies of Oreo DoubleStuff [14] cookies won’t be enough to fix the problem.

UPDATE: Bring back the Hydrox, the FOMC just dropped the federal funds rate [15] 75 basis points to 3.5%

The Committee took this action in view of a weakening of the economic outlook and increasing downside risks to growth. While strains in short-term funding markets have eased somewhat, broader financial market conditions have continued to deteriorate and credit has tightened further for some businesses and households. Moreover, incoming information indicates a deepening of the housing contraction as well as some softening in labor markets.