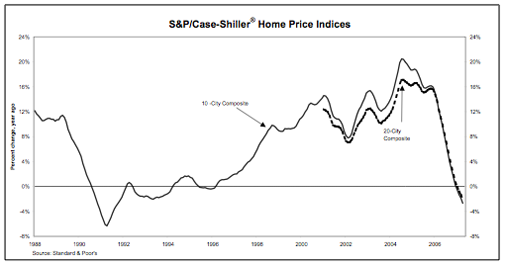 A review of the decline in home price returns on a regional level shows no region is immune to the weakening price returns,” says Robert J. Shiller, Chief Economist at MacroMarkets LLC.

The index showed the fourth straight drop and the biggest decline since the index started in 2001. An index of 10 metropolitan areas fell by the most in at least 16 years. [3] The Bloomberg article also has a heading that describes the index as most accurate. One gets the impression that a lot of effort is being spent by the S&P public relations machine to sell the credibility of the S&P/Case-Shiller index. News coverage tends to include something like what was presented in the Bloomberg piece:

The S&P/Case-Shiller index and another gauge by the Office of Federal Housing Enterprise Oversight track individual homes through repeat sales and more accurately reflect price trends, economists say. The measures from Commerce and the Realtors group can be influenced by changes in the types of homes sold. Higher sales of cheaper homes relative to more-expensive properties will bias the figures down.

OFHEO may feel threatened by the S&P/Case Shiller Index full court press and felt the need to substantiate their validity through a [pause while holding breath and say slowly] white paper called “A Note on the Differences between the OFHEO and S&P/Case-Shiller House Price Indexes [pdf] [4]” written by Andrew Leventis dated June 22, 2007.

(Hap tip to a colleague who has lost more Blackberries than anyone on the planet.)

The fact that a government agency would go on the offensive to dress down a private sector competitor is unprecedented. Since the S&P/Case Shiller Index hasn’t done anything wrong, I can’t come up with a reason for this strategy.

Of course OFHEO is likely feeling the heat on several fronts, ranging from suggestions that they be replaced by another agency [5], their lack of oversight during the Fannie Mae accounting scandal [6] and large bonuses just announced to their executives [7]. They have been releasing other research works [8] lately as well.

OFHEO basically says they are better than Case-Shiller because:

Case-Shiller is a monthly index and OFHEO is a quarterly index, plus OFHEO only includes transactions with mortgages less than $417,000 (include values of refinance mortgages) and excludes a large swath of metro area prices.

Case-Shiller and OFHEO Indexes are similar because:

Its a battle between government (OFHEO) and academia (Case-Shiller). I am hoping for a response from Case-Shiller although I doubt there will be one.

The benefit to the real estate consumer in all this whining and grandstanding exercise is more awareness of what these indexes actually offer and possibly allow for more transparency in the future. In other words, a hodgepodge [9] of possibilities.