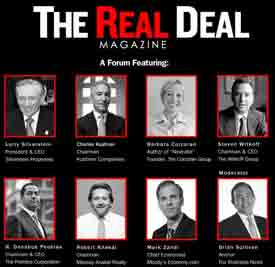 The 4th New Development Forum held by The Real Deal magazine [1], led by publisher Amir Korangy packed the house yet again, the second consecutive year the event was hosted at this venue.

Larry Silverstein, the storied developer and owner of the World Trade site, shared insight and his vision for the downtown market. After all, tomorrow is 9/11.

I was initially concerned because most of the panelists have commercial rather than residential real estate backgrounds. But they spoke in the context of both and it was very informative. I did miss Mark Zandi, founder of Economy.com whom I greatly admire for his analytical insights, who had to cancel at the last minute.

And that’s the real deal.