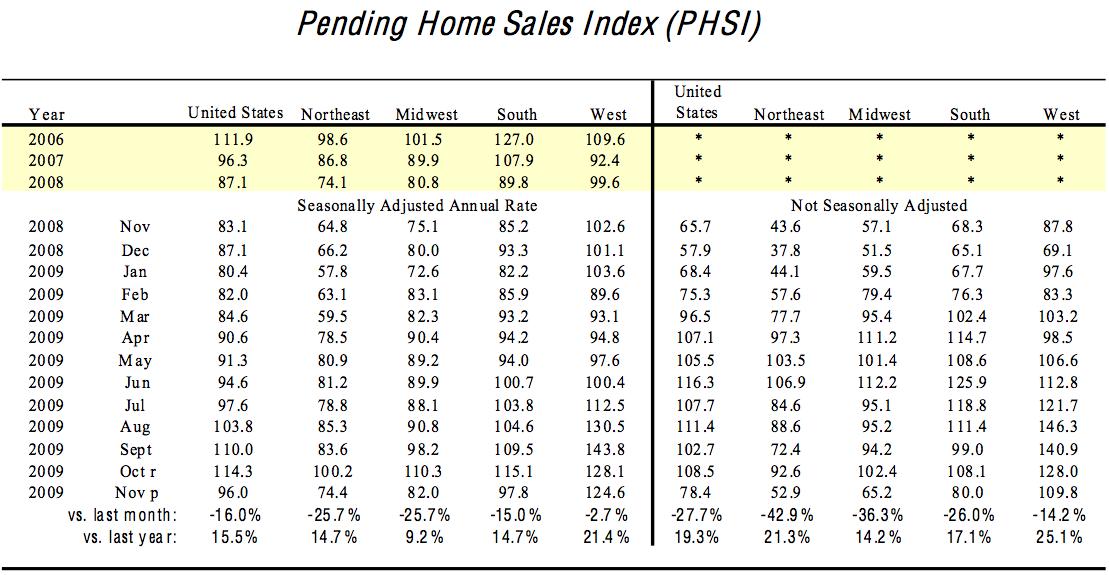 The Pending Home Sales Index, a forward-looking indicator based on contracts signed in November, fell 16.0 percent to 96.0 from an upwardly revised 114.3 in October, but is 15.5 percent higher than November 2008 when it was 83.1.

NAR attributes the drop as a pullback during November related to the uncertainty surrounding the extension of the first time home buyers tax credit [3] which expired November 30th. However it was subsequently extended and expanded to include existing home buyers who have until the end of this April to sign a bonafide contract. We may trivialize the tax credit’s success in the NYC metro area because of the higher housing costs relative to $8,000 and $6,500 tax credits respectively but from my discussions with real estate agents around the country, it did appear to trigger a large portion of home sales in 2009.

What does the 16% drop suggest? More weakness to come?

Yes, but not in the coming months (remember this is a seasonally adjusted stat).

It signifies that the US Housing market doesn’t yet have its own set of legs. No credit = drop in sales.

The combination of high unemployment, rising mortgage rates and the expiring tax credit in the spring, combined with the elixir of rising foreclosures causes by sustained unemployment at high levels suggests housing sales will fall in second half 2009.

Housing in 2010: Stability in the first half, with more concern for the second half.