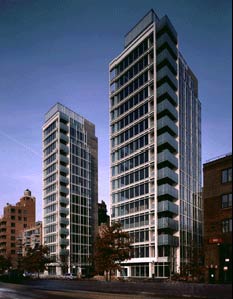 The use of glass curtain walls in new condo developments have been gaining in popularity and will likely make their imprint as the design style of this era. In Living in glass houses, shunning stone [Real Deal] [1] explores this phenomenon in New York.

The housing boom’s rising prices helped developers afford to build in the 25% increase in cost to the sales prices. Glass curtainwalls add more light to a unit, of primary importance in high density urban areas. Glass facades also seem to infer luxury and value, which has been the mantra of new development for the past 5 years.

Honestly, until Richard Meier started the trend with his 173/176 Charles development [2], I always viewed glass walls as an artificial skin to cover over a dated brick facade and therefore assumed them to be less expensive than brick. However, developers have consistently stated that it is more expensive [NYT] [3] to build a curtainwall so I’ll defer to their expertise. Admittedly, after going in some of the raw units in the Meier building that were sold, it seems like the ONLY construction cost associated with the project was the glass curtainwall. The units in this building were simply concrete slabs with a minimal bathroom and kitchen – enough to qualify for the Certificate of Occupancy.

In fact, quite often these buildings are construction alongside historic districts or where the housing is much older and the contrast to local residents can stir ill will. In David Lombino’s article Showdown Today Over Construction Of 32-Unit Glass Building in Village [NYSun] [4], housing activists fighting a proposed development would rather keep the parking lot on the site. …it is hard to see how the proposed design relates to the neighborhood’s traditional characteristics, which he said favored “quaint” designs built from more solid materials like brick and stone.

I can see it now – 20 years from now, you’ll be able to point to one of these new Manhattan buildings and guess their rough age of construction, just like you can guess those: