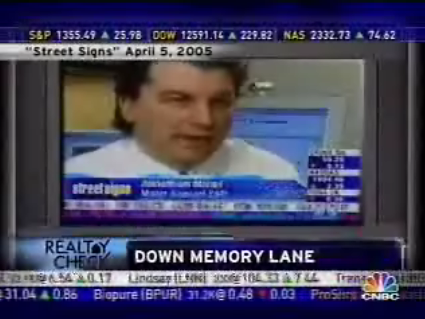 I was sent an email clip of a spot on today’s CNBC broadcast covering the existing home sales stats released for California, except I was included in the broadcast. Unless it was due to too much Easter candy, I didn’t remember being on the show today. 😉

Real estate correspondent Jane Wells reached into her video archive and pulled out an interview we did in 2005 where I estimated 75% of all appraisals were inflated. I remember that my concerns fell largely on deaf ears in the industry back then. Its been a frustrating three years. (And to her comment, her hair looks just as great now).

It was a picture in picture clip, where the anchors watched the tv that was playing the interview. Very cool. I actually posted the same clip [2] of the 2005 interview a little over a week ago.

While it’s satisfying to be proven correct (and have actual video evidence), it’s a shame the lights were on and nobody was home (sorry). She was one of the few national correspondents that covered the housing market at that time that understood the “appraiser” problem growing at an alarming rate.

It’s making me feel both a little old and like a broken record because I have been saying the same thing since that interview (and at least a year before) but finally there is some hope for change.

What was striking about the home sale stats she mentioned was that 1/3 of all sales in California were foreclosures in February. Crazy.