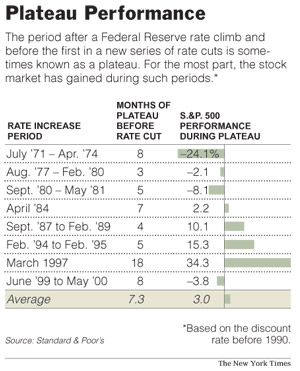 In an interesting article by Paul J. Lim: What the Fed Is Up to, and Why You Shouldn’t Fret [NYT] [1] he makes the case that the likely Fed interest rate increase tomorrow and possible increase in August will have little impact on long term investors.

Recession is a concern for 2007 and many economists are already predicting that the Fed is overshooting and will have to cut rates soon to avoid slipping into a recession. This may be good for housing if there is not irreparable damage caused by the next 1-2 rate cuts. Housing markets have been cooling for much of this year.

I have been speculating about rate cuts in 2007 since this past February. [2]

However, the economy is doing well now with corporate profits up. With higher energy costs, and signs of inflation, the Fed’s hand is forced to raise rates now.

Some investors may be paying close attention to the Fed because they think that once it pauses, the stock market will have an all-clear sign to resume its bull run. That was certainly the case in 1995, when the Dow Jones industrial average rallied more than 40 percent in the 12 months after the last Fed rate increase that year.

Sam Stovall, chief investment strategist at Standard & Poor’s, recently studied what he called the “plateau period,” or the time between a Fed rate increase and the first in a new series of interest rate cuts.

He concludes, with some caveats, that the average time between the last rate hike and the next rate cut is about 5.5 months. If August is our last rate hike, it looks like the 1st quarter of 2007, could be the point were the Fed is forced to cut rates if the economy stalls.