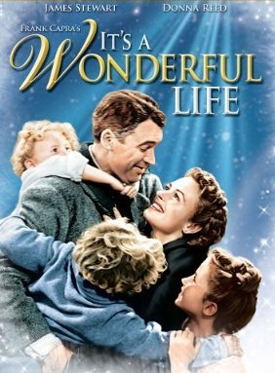 It’s funny how the rapidly changing economic scene changes our view on even the most basic things. A few years ago, it would be hard to imagine anyone seeing Frank Capra’s “It’s a Wonderful Life [1]“ as anything more than a feelgood holiday classic movie. It’s always been a favorite of mine to watch this time of year.

Here’s a recessionary take on current lending as it relates to Potter v. Bailey.

Here’s the thing about Pottersville that struck me when I was 15: It looks like much more fun than stultifying Bedford Falls — the women are hot, the music swings, and the fun times go on all night. If anything, Pottersville captures just the type of excitement George had long been seeking.

And what about that banking issue? When he returns to the “real” Bedford Falls, George is saved by his friends, who open their wallets to cover an $8,000 shortfall at his savings and loan brought about when the evil Mr. Potter snatched a deposit mislaid by George’s idiot uncle, Billy (Thomas Mitchell).

But isn’t George still liable for the missing funds, even if he has made restitution? I mean, if someone robs a bank, and then gives the money back, that person still robbed the bank, right?

I checked my theory with Frank J. Clark, the district attorney for Erie County upstate, where, as far as I can tell, the fictional Bedford Falls is set. He thought it over, and then agreed: George would still face prosecution and possible prison time.

“In terms of the theft, sure, you take the money and put it back, you still committed the larceny,” he said. “By giving the money back, you have mitigated in large measure what the sentence might be, but you are still technically guilty of the offense.”

We’re not saying that Bailey versus Potter is a perfect allegory for today’s credit crunch; Angelo Mozilo and his predatory buddies are no latter-day George Baileys, “starry-eyed dreamers” giving up their own riches to give the Ernie Bishops of the world a chance at the American Dream.

And the majority of the bad loans that have crippled our credit markets were not made to folks like Ernie Bishop, working tirelessly to put a roof over their families’ heads. A fair few of those loans enabled bad real estate investments by people who had no business buying or building homes as big as they did.

But consider this: Perhaps Mr. Potter wasn’t just a heartless Scrooge. Perhaps Mr. Potter, in the absence of sufficient regulatory oversight, was the one voice of sanity keeping the good people of Bedford Falls from over-leveraging themselves.

Salon: All hail Pottersville! [4] This article is from 2001, also written during a recession.

But even a master sometimes flubs a brushstroke, and there is a glaring flaw in Capra’s great canvas.

I refer, of course, to Pottersville.

In Capra’s Tale of Two Cities, Pottersville is the Bad Place. It’s the demonic foil to Bedford Falls, the sweet, Norman Rockwell-like town in which George grows up. Named after the evil Mr. Potter, Pottersville is the setting for George’s brief, nightmarish trip through a world in which he never existed. In that alternative universe, Potter has triumphed, and we are intended to shudder in horror at the sinful city he has spawned — a kind of combo pack of Sodom, Gomorrah, Times Square in 1972, Tokyo’s hostess district, San Francisco’s Barbary Coast ca. 1884 and one of those demon-infested burgs dimly visible in the background of a Hieronymus Bosch painting.

Clearly, we see things the way we want to see them and right now, it’s probably not helping too much. Conservative lending practices continue to damage the very collateral they are intended to protect. Consumers won’t buy because they are worried about their jobs, which in turn causes more businesses to fail.

Just watch the movie as intended and have a wonderful life holiday.

I’ll be back next week.