It seems a bit early to start reflecting on the lessons learned from the housing/mortgage problems we face, since, well, we still face them.

Don’t get me wrong.

It is always good to look back over your efforts and evaluate whether anything different could have been done to yield a different result. It is just that this infers closure and it is too early to summarize.

OFHEO – James Lockhart, the director spoke last week at the 44th Annual Conference on Bank Structure and Competition in Chicago (think Auto show, only less metallic paint) on the “Lessons Learned from the Mortgage Market Turmoil.” [1]

He arrived on the scene after the party already begun and despite the criticisms levied towards both him and his agency, I actually think he did well with what powers he has to employ.

Lessons learned specific to the GSEs

These are important points because the GSEs dwarf other debt and the GSEs have been losing money as of late. Here’s a few charts that may be of interest from his speech [1]: 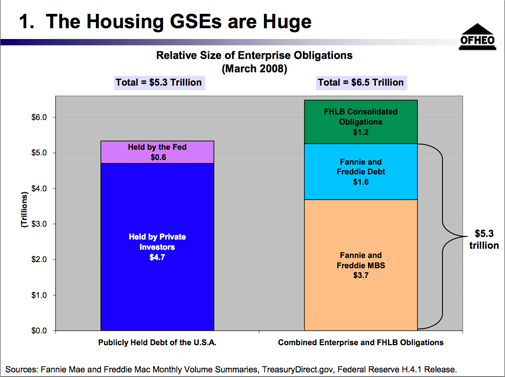 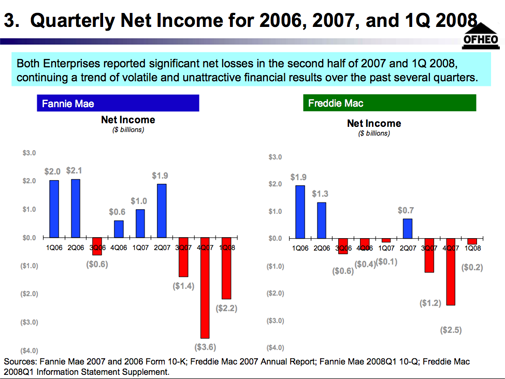 FDIC – Sheila Bair, FDIC CHairman was speaking in Washington, DC at the Brookings Institution Forum, The Great Credit Squeeze: How it Happened, How to Prevent Another http://www.fdic.gov/news/news/speeches/chairman/spmay1608.html on the same day Lockhart was speaking in Chicago. A full court press of self-reflection. Like Lockhart, Bair has been very outspoken and I believe lucid in her depiction of the problems at hand. To her credit, she has clearly articulated the problem with the mortgage system.

Her salient points are:

Both OFHEO and FDIC seem to be saying we need to take action now and they were powerless to do anything before this situation evolved into its current form?

It makes me wonder whether any regulatory proposals will do much good. Regulators did not take action or propose safeguards while the problem was building. How can they suddenly have wisdom now? While these recommendations and insight seem prudent but isn’t it kind of late for that?

Speaking of monoliths, here’s Steve Ballmer getting egged in Hungary [2].