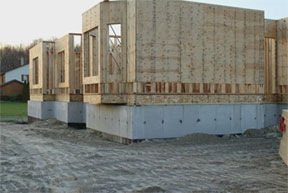 Toll Brothers, the nations largest builder of homes, said that housing prices were not soaring anymore and that future sales projections would have to be revised. [NYT] [1] Still, they project an increase of 7% more homes to be built next year. They have begun to offer additional amenities to encourage sales.

“Per capita disposable income grew 3.6 percent over the last year, according to the Commerce Department.

More than four out of five economic forecasters surveyed by Blue Chip Economic Indicators said they expected existing-home price growth to slow to 5 percent by the end of 2006, from 13 percent over the last 12 months.

“All of a sudden, the ads in the paper show special mortgage deals, special incentives,” Mr. Toll said last week, referring to new housing developments nationally. “That’s an absolute indicator that the market has softened.”

Since the recent hurricanes, home prices are not appreciating significantly anymore. The average price of their homes are $679,000, and the average buyer has an income over $100,000. It would seem to me that since their average sales price is likely double the national average (the median is about $220,000), that their market is essentially the upper end and is not necessarily representative of the overall market. Still it does suggest a slow down.

John Mason, an appraiser and frequent commentor of posts to this blog writes:

The Toll Brothers revising future sales and profit projections.
I never thought of it before, but now that these companies have grown to the point that they are publicly traded [NYT] [2] on the exchanges, we get to see a more transparent market.