I love that Monty Python [1] song!

Well, the Council of Economic Advisors presented their official forecast to Congress [2] in a report [3]and were optimistic (not surprising when you consider what their function is [4]).

The White House stuck with the same, by now relatively optimistic, economic forecast it made last November when it released the annual Economic Report of the President to Congress on Monday.

‘I don’t think we’re in a recession,’ and the administration is not forecasting one, declared Edward Lazear, Chairman of the Council of Economic Advisers (CEA) and President George W. Bush’s chief economist.

Their basis is that the weak dollar offsets [5] (higher growth of non-residential investment) offsets housing declines (lower rates of housing investment.) In fact, Treasury Secretary Henry Paulson has consistently stated that a strong dollar is a better scenario as representative of the administration’s view, yesterday the report suggests just the opposite. 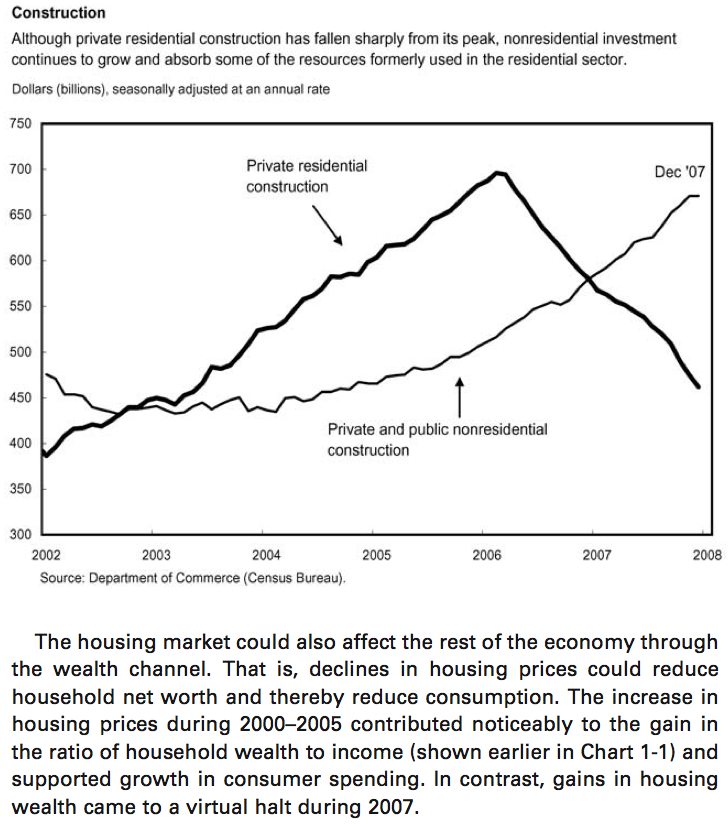 I watched Edward Lazear’s appearance of CSPAN last night and he felt that the “1% of GDP” $168B stimulus plan was enough to get the economy moving again. Of course, there is already a second stimulus plan in the works so I don’t see this prediction as reliable. He feels the economy will bounce back this summer once the stimulus kicks in. After reading these excerpts, it doesn’t appear to be consistent with the discussion within the report itself:

Nationally, nominal house price appreciation slowed to a crawl in 2007, and house prices fell when corrected for inflation….

Every major measure of housing activity dropped sharply during 2006 and 2007, and the drop in real residential construction was steeper than antici- pated in last year’s Report. Housing starts (the initiation of a homebuilding project), new building permits, and new home sales have fallen more than 40 percent since their annual peaks in 2005. The drop in home-construction activity subtracted an average of almost 1 percentage point at an annual rate from real GDP growth during the last three quarters of 2006 and the four quarters of 2007. Furthermore, even if housing starts level off at their current pace, lags between the beginning and completion of a construction project imply that residential investment will subtract from GDP growth during the first half of 2008.

During 2007, as in 2006, employment in residential construction fell, as did production of construction materials and products associated with new home sales (such as furniture, large appliances, and carpeting). Yet despite these housing sector declines, the overall economy continued to expand In addition to incomes and mortgage rates, the number of homes built is underpinned by demographics. Homebuilding during 2004 and 2005 aver- aged about 2.0 million units per year, in excess of the 1.8- or 1.9-million unit annual pace of housing starts that would be consistent with some demographic models for a decade-long period, leading to an excess supply of houses on the market. More recently, the 1.2 million unit pace during the fourth quarter of 2007 is well below this long-term demographic target. The pace of homebuilding has now been below this level for long enough that the above-trend production of 2004 and 2005 has been offset by the more recent below-trend production. Yet the construction of new homes continued to fall rapidly through year-end 2007, with the undershooting possibly reflecting uncertain prospects for house prices as well as elevated inventories of unsold new and existing homes. Once prices become firm and inventories return to normal levels, home construction should rebound, but it is difficult to pinpoint when this will occur. The residential sector is not epositive contributions to real GDP growth until 2009.

In fact, Federal Reserve governor William Poole thinks that our odds of a recession are higher [5] but that we won’t actually enter a recession.

Jan Hatzius, chief United States economist at Goldman Sachs, wrote in a research note on Monday that he was convinced the economy was already in a recession and he warned that losses in the housing market could be even bigger than the $400 billion that Goldman predicted several months ago.

In other words, the credit crunch/housing market issues will be resolved in six months, there won’t be a recession and we won’t need a second stimulus plan [6].

I think more “rebalancing” is needed.