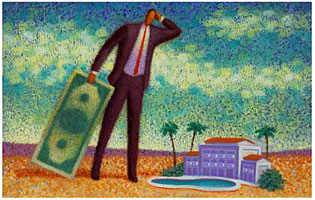 After 30 years of size increases, the average size of a house has not increased in the past 4 years [NYT]. [1] Tastes have shifted with buyer preferences weighted toward more amenities than size.

In a 2004 nationwide survey, the association asked homeowners: “For the same amount of money, which of the following would you choose: a bigger house with fewer amenities, or a smaller house with high quality products and amenities?” Only 37 percent of the 2,900 randomly selected respondents wanted the bigger house. Sixty-three percent said they would prefer the smaller house with more amenities.

Public perception of these homes may have played a role in the shift in preferences as owners are associated with greed, generic design and out of scale with the neighborhood.

This trend is logical since the costs associated with larger sized housing are rising as land prices increase and site become more scarce in many established suburban areas.