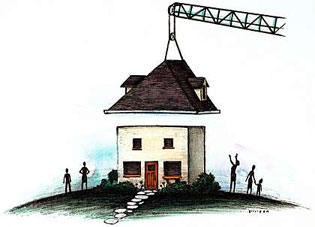 There was a great article in the New York Times today that provided some logic as to why Katrina could extend the housing boom further [1].

There have been signs lately that the intensity of the housing boom was waning as outlined in a WSJ story [Note: Paid Sub.] [2] or could it simply be because its August? 😉

The shortage of building supplies [3] and rising fuel prices as a result of the storm are thought to temper the economy, dragging down long term rates as inflation threats are diluted. The outlying areas around the devastated region are already seeing a surge is rental demand [4] as people were displaced from their homes. 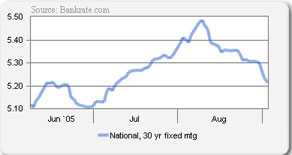 We can already see a damper in mortgage rates, which dropped sharply last week.

In another good article in last week’s New York Daily News [no, not because I was in it] [5] that provided similar logic. Higher costs are keeping a damper on inflation, which keeps long-term mortgage rates low.

What I find so fascinating about all this is how different the economy is today as compared to the last oil crises in the early 70’s. Bond investors see a slowing economy as the answer to keeping inflation in check. Corporations are forced to absorb much of the higher operating costs that come along with rising fuel and material costs due to foreign competition. That in turn keeps a reign on hiring and payroll.

There is already speculation that the Fed will not raise short-term rates in their next session due to concern that the economy could slip back into a recession.

And the housing market keeps going…