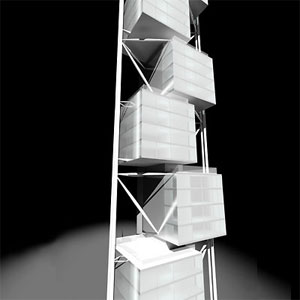 Troy McMullen’s thorough article today Condos With a Name: ‘Available’: The Architect May Be A-List, But the Location Often Isn’t; Meier, Libeskind Languish [WSJ] talks about the Starchitect phenomenon and how thats not necessarily the panacea for real estate developers trying to move their product. [and my firm is cited as a source in the article – excessively shameless plug]

I recently wrote an article about Starchitects in New York Living [1] and concluded that while it was an effective way to differentiate a new offering, the initial motivation for their services is now diluted as it becomes the norm and the efforts don’t tend to stand out as much any more.

Its definitely an exciting time for lovers of architecture.

One of the most difficult aspects of rating the success of a new development is how rapidly the units are being absorbed. Having been on both sides of the fence, first as a condo sales director more than 20 years ago, and since then as an appraiser, I can appreciate the dilemma that all parties go through in this process. There is a lot of money at stake and much of the success of the project depends the timing of its entry to the market. Its all about keeping the momentum going in the initial concentrated marketing effort.

The data is not verifiable in public record until closings begin and rumors among the brokerage community can spread like wildfire. The speed of absorption tells us how accurately the property is priced and how well the mix of units matches the neighborhood. The exageration of sales success can backfire as the development moves closer to completion. The gap between actual sales and “told” sales gets more and more difficult to explain as evidenced in this article and can result in a consumer backlash.

At the end of the day, its still all about price and its relationship to the amenities provided. And in a less frenzied market, price becomes even more critical and the market less forgiving.