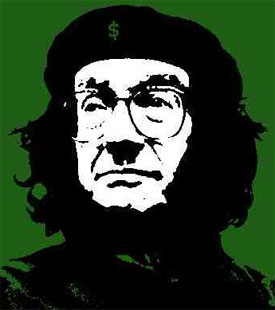 Following the collapse of one of the largest asset bubbles in the history, the credit and housing markets, everyone is trying to figure out what went wrong. One of the biggest figures in the asset price run up was former Fed Chair Alan Greenspan [1], whom radio host Don Imus [2] used to refer to as the Zen-God or Crazy Al when talking to Greenspan’s wife Andrea Mitchell, NBC News Chief Foreign Affairs Correspondent [3].

A lot as changed since Greenspan moved on to the other things. He has written a book [4] and has spent a lot of energy distancing himself from the problems that were put into play under his watch at the Fed.

On Sunday he wrote a piece for the Financial Times called We will never have a perfect model of risk [5].

In other words, there is no such thing as a sure thing. He says:

The American housing bubble peaked in early 2006, followed by an abrupt and rapid retreat over the past two years. Since summer 2006, hundreds of thousands of homeowners, many forced by foreclosure, have moved out of single-family homes into rental housing, creating an excess of approximately 600,000 vacant, largely investor-owned single-family units for sale. Homebuilders caught by the market’s rapid contraction have involuntarily added an additional 200,000 newly built homes to the “empty-house-for-sale” market.

Home prices have been receding rapidly under the weight of this inventory overhang. Single-family housing starts have declined by 60 per cent since early 2006, but have only recently fallen below single-family home demand. Indeed, this sharply lower level of pending housing additions, together with the expected 1m increase in the number of US households this year as well as underlying demand for second homes and replacement homes, together imply a decline in the stock of vacant single-family homes for sale of approximately 400,000 over the course of 2008.

Apparently the reason that this credit market bubble was missed was because the EXACT same thing had never happened before. Therefore the sophisticated models could not possibly work?

The most credible explanation of why risk management based on state-of-the-art statistical models can perform so poorly is that the underlying data used to estimate a model’s structure are drawn generally from both periods of euphoria and periods of fear, that is, from regimes with importantly different dynamics.

How about an application of common sense? Mortgage origination ran amok from 2004-2006 with virtually no oversight – isn’t this the banking system? There were no checks and balances in the underwriting decision process. Salesman ruled the planet and risk was something to deal with later on.

We will never be able to anticipate all discontinuities in financial markets. Discontinuities are, of necessity, a surprise. Anticipated events are arbitraged away. But if, as I strongly suspect, periods of euphoria are very difficult to suppress as they build, they will not collapse until the speculative fever breaks on its own. Paradoxically, to the extent risk management succeeds in identifying such episodes, it can prolong and enlarge the period of euphoria. But risk management can never reach perfection. It will eventually fail and a disturbing reality will be laid bare, prompting an unexpected and sharp discontinuous response.

Speaking of irrational behavior, check out the most daring magazine cover [7] EVER.