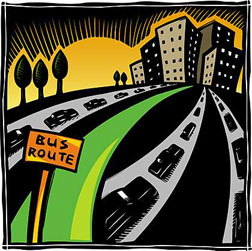 There has long been the theory that reducing sprawl drives up housing prices. A study by Sacramento State University disputes this theory and found that cutting sprawl may actually reduce housing prices. [Central Valley Business Times] [1]

Sprawl has been blamed for traffic congestion, air pollution, loss of open space, and economic, racial and ethnic segregation. But sprawl also enables people to buy the bigger homes they often desire in the suburban places they view as far away from the problems of the central locations.

The study found that a housing prices could be expected to fall in an area that is controlling growth (limiting sprawl) as buyers tend to purchase smaller houses with smaller lots. In other words upper priced home buyers leave the area to look for larger properties, dropping median prices in the smart growth area..

Webmaster’s note: Unless I am completely missing the point, this study seems to indicate that there is a shift in the mix of housing to smaller units in urban areas where there is smart growth. Falling prices then are attributable the shift in mix of sales. I suspect that the values of individual houses actually rise. When development or marketability is restricted, values rise. Its a simple case of supply and demand. This is why housing prices are higher on the east and west coasts – less available land and more restrictions on development.