My son planted about 30 tomato plants in our garden this year so needless to say, I am now full of tomatoes.

One of the things that have come out of all the upheaval in the mortgage markets has been the frequency and clarity of explanations as to what happened and how the markets got into this predicament. Hindsight is 20/20 so they say. It was not long ago that people were scratching their heads about how prices can rise at an expotentially higher rate than income for a seemingly indefinite period of time. 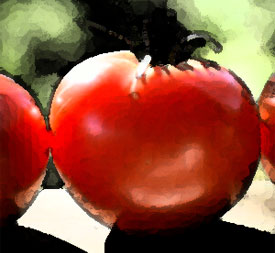 It was all about the Benjamins mortgages and how easily the payments could be managed. Downpayment became monthly payment in the dialog between buyers and lenders. Lenders reduced underwriting requirements to bare bones, appraisers were encouraged to become form fillers. The lending community came up with mortgage products to stimulate transactions and Wall Street responded, creating a labrynth of tranches designed to move risk around to the right places…except investors ulitmately figured out that few on Wall Street really understood the risk. And then the world changed.

As Jim Grant wrote in Time Magazine (special thanks to “the man who wears shirts that look like graph paper.”) [1]:

That is the way great ideas end, not with a bang, not with a whimper, but through reductio ad absurdum. You know investment bankers are not satisfied until every good idea is driven into the ground like a tomato stake.

Here’s a few recent summaries of what happened over this period of mortgage excess that I found particularly interesting.

How Missed Signs Contributed to a Mortgage Meltdown [New York Times] [2] with a very cool chart [3]. Things were moving so quickly but we should have seen it coming.

As far back as 2001, advocates for low-income homeowners had argued that mortgage providers were making loans to borrowers without regard to their ability to repay. Many could not even scrape together the money for a down payment and were being approved with little or no documentation of their income or assets.

In December, the first subprime lenders started failing as more borrowers began falling behind on payments, often shortly after they received the loans.

Reaping What You Sow: Hedge Fund and Housing Bubble Edition [Huffington Post] [4]. This article suggests that a Fed rate cut represents help for the wealthy and not the masses.

Last week we got to watch as the markets went wild with the realization they were over leveraged on bad debt, until Bernanke rode in with a huge bailout, answering a question (and settling some bets) on whether he was an inflation fighter, or an inflationist (he’s an inflationist, and he has now proved it.)

Bloody and Bloodier – The subprime-lending crisis is worse than you think, and could crush financial and real-estate markets for years. [New York Magazine] [5]. Besides sharing dentists, I can empathize with Jim Cramer’s pain as of late. Barron’s Magazine dedicated its cover story to analyzing how wrong his advice has been in his CNBC show Mad Money [6] in the article: Shorting Cramer [7].

Panic on Wall Street [Salon] [8]. It starts with an obligatory blame Greenspan bent but goes deeper.

There is a standard explanation included as a paragraph in almost every story attempting to explain the current turmoil. It goes like this: Anxious to goose the U.S. economy out of its dot-com-bust doldrums, Alan Greenspan and the Federal Reserve Bank lowered interest rates to rock bottom in 2001. The resulting flood of cheap money encouraged an orgy of borrowing at every level of the U.S. and world economies. Whether you wanted to buy a house or a multibillion-dollar conglomerate, lenders were your best friends, falling over themselves to offer you whatever amount of capital you desired — and charging low, low rates of interest. Cheap money led to a growing complacency about risk. If you ran into trouble, you could just refinance your house, or borrow a few billion more dollars today to pay off the billions you might owe tomorrow.