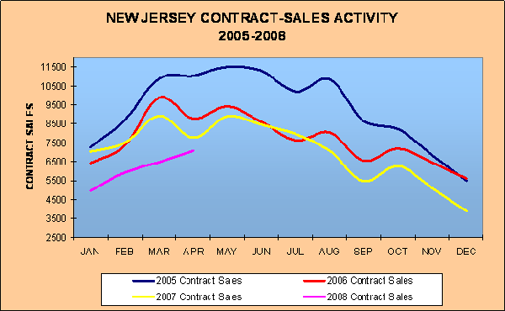 April home sales increased from the March pace for the first time since 2005 in what may be a sign that market stabilization has begun. In April, New Jersey contract-sales activity increased for the 4th consecutive month and recorded a 9.3% increase above the March level. By comparison, sales activity declined during April in both 2006 and 2007.

Also significant is that number of homes for sale rose modestly as Unsold Inventory increased by only 4.5%, less than normal for the month of April. As a result of these trends the Projected Absorption of homes offered for sale now stands at it’s lowest level of the year reflecting a 10.0 month supply. By comparison, absorption stood at 12.7 months in January, 11.0 in February and 10.5 in March.

Any determination as to whether these trends actually signal the beginning of a market recovery hinges on the momentum carrying through for the remainder of the 2008. There are ,however, a growing list of positive factors for the housing market which include increased housing affordability due to lower home prices, favorably low mortgage interest rates and massive pent-up demand due to reduced purchase activity.

To keep things in the proper perspective however, it is clear that the housing market remains in the grip of a dramatic correction and will not see rising prices until Unsold Inventory levels have been reduced significantly. Until then home prices will likely drift slightly lower, although at a slower pace than the past 2 years. But a bottom to the housing downturn may be forming which would be a first step towards recovery. Potential home buyers who have been delaying their purchase in an attempt to ‘time the market’ should consider whether that time has now come. This is because the greater risk in delaying is the likelihood of higher mortgage rates in the future due to the inflationary pressures of high oil and food prices which will erase any potential savings from future price declines. Supporting this view is recent remarks by Federal Reserve Chairman Ben Bernanke indicating that future interest rate cuts are not likely due to a need to guard against inflation. Our analysis of the cost-benefit relationship of delaying a home purchase indicates that the added monthly cost attributable to rising interest rates is likely to be greater than the savings generated by any further price declines. Thus, the next 6 months will present a rare combination of low interest rates, low home pricing and a wide selection of homes being offered by motivated sellers. We’re all likely to look back five years from now and conclude that 2008 was a time when Smart Buyers took advantage of this unique opportunity by locking in both low prices and low interest rates. I’m reminded of the axiom that the right time to sell is when everyone else is buying, and the right time to buy is when everyone else is selling.