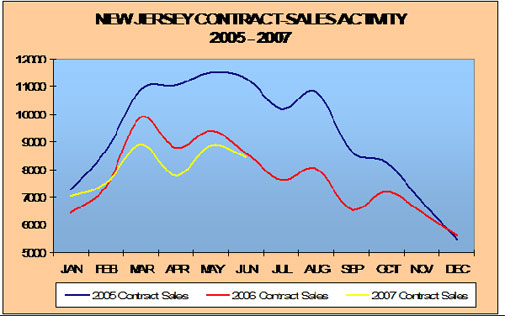 The results of our latest analysis indicate that contract-sales activity declined by 5% in June, continuing a pattern of inconsistent sales pace. Following 3 consecutive months of increasing sales activity in January, February and March, sales declined in April, then increased in May, only to decline again in June. This uneven performance is evidence that the market has yet to regain its balance and continues to struggle with the effects of diminished affordability following the unprecedented home price increases that occurred between 1992 and 2005.

From an inventory perspective, while the number of unsold homes continued to rise in June, that increase occurred at a slower pace than in the 4 preceding months. Unsold Inventory increased in June by only 1% suggesting that inventory growth may be approaching the high-water mark. Statewide Unsold Inventory now represents an 8.5 month supply, as compared to 8.1 months in May and 7.7 months one year ago.

Despite this uneven performance, there are emerging signs that the housing market may be nearing the bottom of its current recession which began in September 2005. The most compelling evidence is based upon submarket trends in northeastern New Jersey that are within commuting range of Manhattan. In these markets, which include the counties of Bergen, Essex, Hudson, Middlesex, Monmouth, Morris, Somerset and Union, contract sales declined by only 1.7% from May to June (as compared to 5% statewide) and actually ran higher than the June 2006 level. Most notable in this group is Hudson County where year-to-date sales activity is running 12% ahead of last year. The stronger market conditions in northeastern New Jersey serve as a reminder that the strength of the Manhattan real estate market, which continues to experience strong demand levels, is generating overflow demand to nearby suburban locations. Expect this to be a long term trend as communities near to direct Manhattan rail access will see the strongest price increases once the market recovers.

Looking ahead the housing market still faces significant challenges as sales pace will likely slow during the approaching fall and winter seasons. Given this probability, home prices will be challenged to hold at current levels considering there are presently more than 72,000 homes for sale in New Jersey as compared to only 39,000 in June 2005.