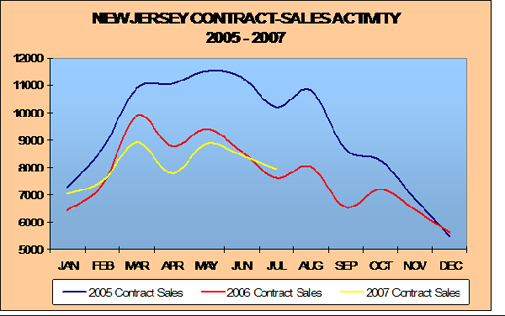 The decline in the housing market which began during the 2nd half of 2005 is evidenced by the rising tide of unsold homes on the market. While there are many contributing factors, the supply of competing properties is paramount as it creates a ‘mood of the market’ which determines whether home buyers feel any sense of urgency. For example, as Unsold Inventory declines and a buyer’s choices diminish they are inclined to purchase sooner rather than later driving inventory even lower and home prices higher in the process. Conversely, rising inventory extends normal marketing time causing home sellers to reduce their asking price. In this rising tide environment home buyers adopt a ‘wait & see’ stance due to concern about falling home prices, leading to further increases in Unsold Inventory and thus creating a downward spiral. Any reverse of this cycle is then predicated upon a decline in Unsold Inventory. While this is admittedly a simplistic view which does not take into account corresponding demand factors, the bottom line is that the housing market can not improve significantly until Unsold Inventory declines. And the first step toward inventory decline is for it to stop rising.

The New Jersey housing market provided a glimmer of hope in July as Unsold Inventory declined for the first time since January. That this decline accounted for less than a 1% reduction in Unsold Inventory makes it clear that the housing recession is far from over and will continue into 2008. However, should inventory hold at its present level would signal the ‘beginning of the end’ for the housing recession.

The July housing market also saw an increase in contract-sales activity on a seasonally adjusted basis. As demonstrated in the NEW JERSEY CONTRACT-SALES ACTIVITY chart, July sales were higher than one year ago confirming that while the housing market is weak it still has life. No surprise here as despite the decline in sales activity over the past 2 years the underlying demand for housing is still bubbling beneath the surface. This is because life goes on with continuing household formation, marriages, the birth of children, job promotions, divorce and retirement all leading to changing housing needs which translates into housing demand. Thus, the stage is being set for a rebound in the housing market once the current challenges sort themselves out.

From a market absorption perspective, the Unsold Inventory presently reflects a 9.0 month inventory of homes as compared to 8.9 months in June. This however compares to a 4.0 month supply in July 2005 suggesting that inventory is currently about double where it needs to be before home prices will start rising again. This is important to would-be home sellers who are considering waiting things out before selling their present homes as any rise in home prices is likely several years off.