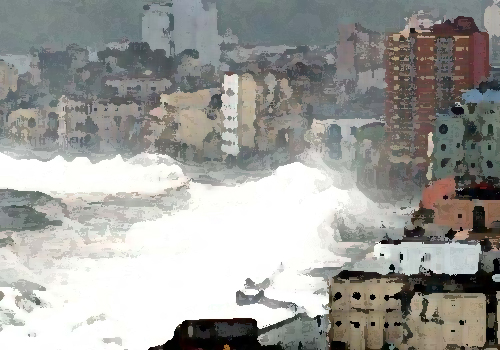 I turned on the TV this morning to catch an update on the hurricane in New Orleans, hoping it was better. Thank goodness no deja vu, [1] the storm appeared to be less intense than originally feared. I flipped the channels and saw Geraldo Rivera holding an anemometer [2] counting off the wind speed. It reached 70mph, and thought, this is simply perverse.

The Federal Deposit Insurance Corporation, or FDIC, insures bank deposits of up to $100,000 at nearly 8,500 of the nation’s banks and also keeps a watch list of banks that it considers in trouble.

Thanks to a collapsing housing market and a weak economy, a growing number of banks are struggling to stay afloat, with not enough cash on hand to cover losses from bad loans.

At the beginning of the year, 90 banks were on the FDIC watch list. There are now 117, FDIC chairwoman Sheila C. Bair announced at a news conference this afternoon. That is the highest number in five years, but some analysts expect the list to grow even more in coming months.

This is supposed to be one of the biggest financial catastrophes in US history, no? In the 1980s FDIC removed nearly 2,000 institutions and S&L from the face of the earth. I remember the unbelievable stuff we saw as appraisers, performing workouts for RTC and FDIC in the early 1990s. Incredible stupidity abound.

Because it’s not all about the traditional banks…

It’s about the investment banks and the investors. Banks were able to shift the risk to third parties via securitization.