As we enter the post-Superbowl housing market, here’s a few items of interest (well, at least to me). Actually, I never thought of the Superbowl as a milestone for the housing market, but some people apparently have.

But what few folks may know is the fact that the Super Ball ended up becoming the idea for the term “Super Bowl.” The first two contests between the NFL and the AFL were labeled the “World Championship Game.” After the second such contest, the owners were sitting around trying to come up with a snappier name when Lamar Hunt, the guiding light of the American Football League, and the owner of the AFL’s Kansas City Chiefs, remembered watching his daughter play with a high-bouncing Super Ball a few days earlier and ‘ball’ morphed into ‘bowl.’ Voila…Super Bowl!

But is the stock market truly showing signs of prosperity, or is it just BS?

I would like to suggest the latter and that it might not be a good time for you to obtain a home equity loan to invest in hot tech stocks. We are going through a housing bubble, and stock valuations as measured by stock price-to-earnings (PE) ratios are at bubble levels. The buy low, sell high philosophy would lead you to sell stocks now, not buy them.

He says the economic numbers favor the Seattle Seahawks over the Pittsburgh Steelers in the National Football League’s title game, which often turns into a tongue-in-cheek referendum on the competing cities. Las Vegas oddsmakers favor the Steelers over the Seahawks today by 4 points.

“If the Seahawks match up to the city’s relative economic and market performance, then the oddsmakers may have the wrong team,” Rosenberg wrote in a Feb. 2 report after reading a sports column titled: “Give Me a Good Reason to Root for the Seahawks.”

Well, Pittsburgh won decisively, so the moral of the story is: there is no correlation between the Superbowl and the housing market, as much as we would like there to be. 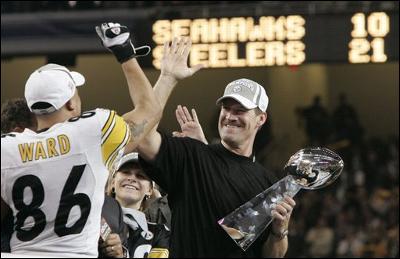