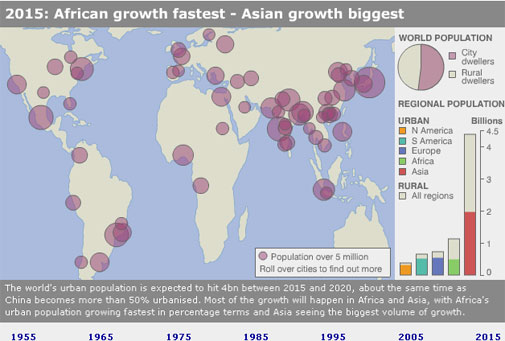 On a global scale, modest North American urban growth is in sharp contrast to patterns seen in Asia with China expected to be 50% urbanized (city versus rural) by 2015.

The US coasts are expected to see the largest growth over the next 10 years. That comes as little surprise and consistent with the significantly higher housing appreciation rates seen in the west and the northeast over the past 10 years.

Here is an amazing interactive map [BBC] [1] that shows the global population patterns from 1955 projected through 2015.

However, according to the census bureau, despite the macro trends for urban renewal, including new urbanism, the suburbs are actually flourishing as homeowners look for cheaper housing and better schools. The top five fastest growing cities were suburban (defined as having less than 200,000 in population).

San Francisco, with the highest real estate prices in the country, has lost 37,000 people since 2000, according to the Census Bureau.