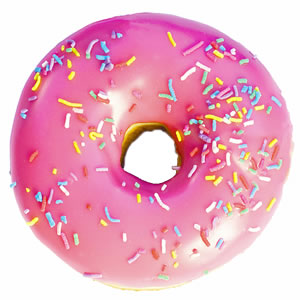 Years ago, there was a Dunkin’ Donuts commercial with the catch phrase “got time to make the donuts [2]” which has remained one of my regular phrases.

For the past few months I’ve talked a lot about housing markets with “a hole in the middle” in my speaking engagements. I’ve been surprised at the volume of in-person feedback on “Donuts” just from my Bloomberg TV appearance with Deirde Bolton [3] a few weeks ago including a senior bank executive at a board meeting I was presenting, a WSJ editor and reporter and others.

For lack of a better description, many housing markets, especially along the coastal US, are like a donut (NYC’s version is more of a bagel than a donut – thicker but not as sweet). Incidentally, I made donuts at the bakery in college so I’m obviously more than qualified to use this weak analogy.

The “hole in the middle” pattern is something I’ve been observing in the various housing markets I follow or dabble in – i.e. Manhattan, Westchester, Hamptons, Brooklyn, Miami, SF, DC, to name a few. I’m not defining it by a specific price but the middle is more like the segment just above the middle in these markets. It’s placement is specific to the price structure of each market.

The “donut housing economy” is holding back consumers from trading up in an orderly fashion. i.e. from the low to middle of the market, from middle to high (or the reverse).

By describing the middle as a “hole” I don’t see the middle as a stark barren wasteland (i.e. w/o sprinkles). I’m simply observing that it’s weaker relative to the top and bottom…for now.