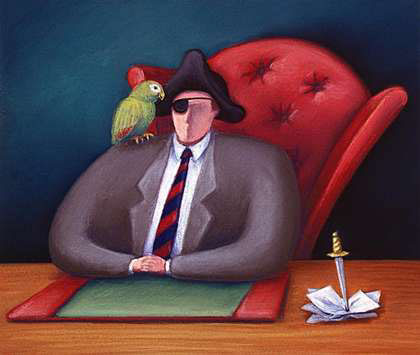 Every September 19th is International Talk Like A Pirate Day [2] where people stop concentrating on work and search for anything related to Pirates. According to Wikipedia, International Talk Like A Pirate Day is a parodic holiday invented in 1995 by two Americans, John Baur (“Ol’ Chum Bucket”) and Mark Summers (“Cap’n Slappy”), who proclaimed September 19 each year as the day when everyone in the world should talk like pirate. In 2002, humorist Dave Barry wrote a column on this and the rest, they say, is history.

Here’s a sampling of how much interest there is in this topic:

Notable coverage of this event includes:

Other Sites of Interest:

What does this have to do with the real estate economy? I could say something clever like “Thats how some buyers feel about their sellers” or “capital gains tax = pirating profits by the government” but I’d rather not say something clever so…aye! get back to work ‘ya landlubber!