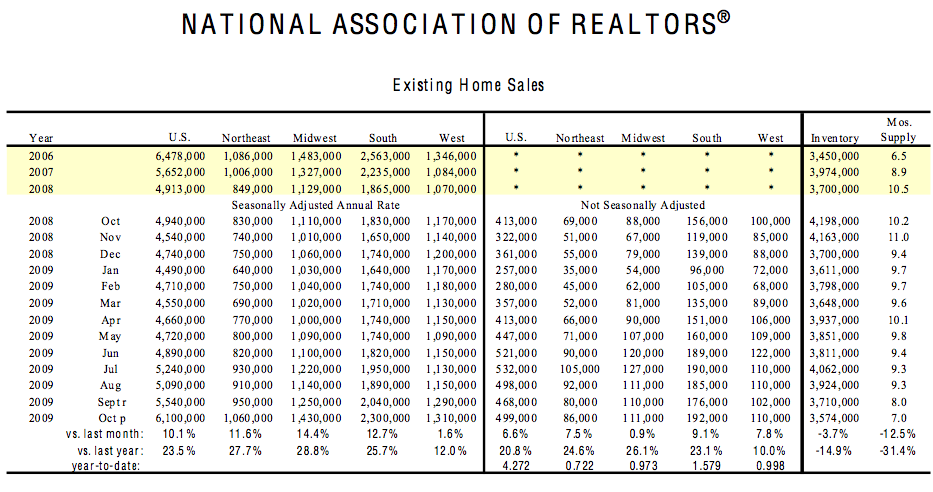 The National Association of Realtors released their October 2009 Existing Home Sale Report [2] and the news was positive and kind of weird.

Driven by the first-time buyer tax credit, existing-home sales showed another big gain in October with a strong uptrend established over the past seven months, while inventories continue to decline.

It looks like the uptick in sales last month has been eliminated with the downward revision this month.

Existing-home sales – including single-family, townhomes, condominiums and co-ops – surged 10.1 percent to a seasonally adjusted annual rate1 of 6.10 million units in October from a downwardly revised pace of 5.54 million in September, and are 23.5 percent above the 4.94 million-unit level in October 2008. Sales activity is at the highest pace since February 2007 when it hit 6.55 million.

The number of sales was up 23.5% over the same period last year and up 10.1% from August [3]. Both saw unusually sharp increases, caused by the expiration of the tax credit [4] (and then renewal and expansion), falling mortgage rates, rising foreclosures (falling prices) and improved affordability.

If you remove the seasonality adjustment, the number of sales was up 20.8% over the same period last year and up 6.6% from August, still significant.

“It’s an impressive increase and shows a lot of pent-up demand for housing,” said Dean Maki, chief U.S. economist at Barclays Capital Inc. in New York. “Buyers have enough confidence to take the plunge. The housing market recovery will be a durable one. [5]”

I’m not clear how the recovery is durable since it is solely dependent on artificially depressed mortgage rates, federal agency bailouts and tax credits.

Prices continued to fall as there remained a large market share of foreclosures and lower priced properties and condos receive the most interest from buyers.

The national median existing-home price for all housing types was $173,100 in October, down 7.1 percent from October 2008. Distressed properties, which accounted for 30 percent of sales in October, continue to downwardly distort the median price because they usually sell at a discount relative to traditional homes in the same area.

Total housing inventory at the end of October fell 3.7 percent to 3.57 million existing homes available for sale, which represents a 7.0-month supply2 at the current sales pace, down from an 8.0-month supply in September. Unsold inventory totals are 14.9 percent below a year ago.

Whats kind of weird about all of this good news, is that prices are falling,low end sales activity surged, market share of foreclosure sales remains high and high end housing market segments are the weak.

The NAR press release seems to couch readers in their anticipated sharp decline in sales over the winter.