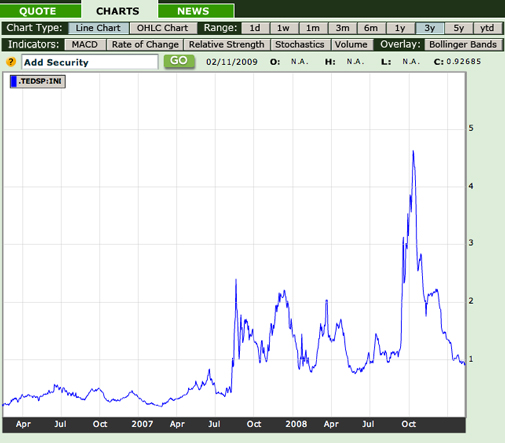 Ok, so this is my second Bill & Ted [2] reference this week, but hey, Keanu Reeves starred, Matrix, etc.

I was having lunch with a good friend (other than the grief I regularly get about my bright shirt colors) the other day and he suggested I follow the TED spread more closely. While I have followed it, I’ve not been as fanatical about as many economists are. Perhaps I should be since, like the Fed’s Senior Loan Office survey [3], TED provides useful insight into the lending environment beyond mortgage rates.

I watched the CNBC special last night House of Cards [4], which was very good – not too much I hadn’t heard before but it did provide more clarity to the sequence of events and expanded my understanding of the roles Fannie/Freddie, Greenspan, CDOs and the rating agencies played in the risk/reward disconnect.

I also learned that the word Credit is derived from the Latin for Trust.

The TED spread [5] (Treasury Eurodollar) for the uninitiated is the rate spread between treasury bills and and LIBOR.

Treasury bills are thought to represent risk free lending because there is the assumption that the US government will stand behind them. LIBOR represents the rate at which banks will lend to each other.

the difference in the two rates represents the “risk premium” of lending to a bank instead of to the U.S. government.

When the TED spread is low, banks are likely in good shape because banks feel nearly as confident lending to each other as if it were backed US government (The US has recently proved we’ll back pretty much back anything).

The spread is usually below 100 basis points (“1” on the chart). It reached a recent low of 20 basis points in early 2007, which in my view, shows a disconnect in the pricing risk since the subprime mortgage boom began to unravel in early 2006.

The spread spiked in in mid 2007 at the onset of the credit crunch (that was a summer to remember) and later spiked to 460 on October 10, 2008 as the wheels came off the financial system and became the new milestone or “tipping point” for the new housing market.

The spread has been contracting which is perhaps a sign that banks are starting to feel less panicked about each other. I think lending conditions will improve over the next few years, but there is a long way to go as measured by years rather than quarters.

Note: Another TED worth noting. A great resource [6] for the intersection of Technology, Entertainment and Design.