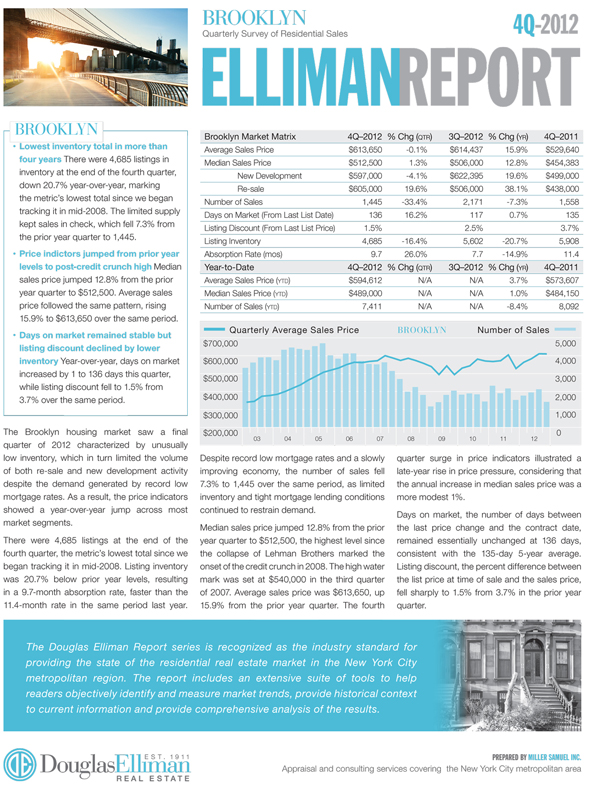 We recently published our report on the Brooklyn sales market for 4Q 2012 [2].   This is part of an evolving market report series I’ve been writing for Douglas Elliman [3] since 1994.

…The Brooklyn housing market saw a final quarter of 2012 characterized by unusually low inventory, which in turn limited the volume of both re-sale and new development activity despite the demand generated by record low mortgage rates. As a result, the price indicators showed a year-over-year jump across most market segments.

There were 4,685 listings at the end of the fourth quarter, the metric’s lowest total since we began tracking it in mid-2008. Listing inventory was 20.7% below prior year levels, resulting in a 9.7-month absorption rate, faster than the 11.4-month rate in the same period last year. Despite record low mortgage rates and a slowly improving economy, the number of sales fell 7.3% to 1,445 over the same period, as limited inventory and tight mortgage lending conditions continued to restrain demand…

You can build your own custom data tables [4] on the market – now updated with 4Q 12 data. Charts with 4Q12 data appended will be online shortly.