This post is an excerpt from my July 3, 2020 Housing Note newsletter [1]. You can signup for these weekly emails here [2].

One of the most unethical actions against AI membership is about to take place (for a third time), and the uproar is just beginning. I’ve had many appraisers reach out to me over the past week, conveying how upset they were. I’m not even affiliated with the Appraisal Institute, and I’m furious because it brings down the entire industry in the eyes of others.

Back in 2016, I unleashed a flurry of commentary criticizing the Appraisal Institute executives who had a plan to take all chapter funds [3] for no justifiable reason. The membership reacted by calling leadership to task, which is a challenging, scary thing when they are threatened by leadership [4] and might lose their designations, which could impact their livelihood.

Now we are facing something much darker and maybe the final downfall of the Appraisal Industry as an organization.

Here is what someone said about this election sham:

“Why not next year instead of this year, why are you doing this when you know that in the middle of a pandemic and that it will tear the Institute apart from the top?”

A well-regarded and nationally-known appraiser and Appraisal Institute member, Craig Steinley [5], won the backing of the national nominating committee, and his name was submitted publicly because confirmation is essentially a rubber stamp. Craig was thought to be the best choice this year by the national nominating committee. The confirmation is supposed to take place in the first week of August (more details later on).

Here is a rough overview of how the nominating process works:

Here is how the sham ‘petition process’ bylaw works:

The key to the petition process is to disregard the nominating committee recommendation. This was inspired by at least four former presidents more than a decade ago: there are only 6 national board member votes needed to override the nominating committee recommendation. With those 6 votes, Amorin, the current CEO, can control the future presidents and officers indefinitely. Doesn’t that seem to be against the interest of the membership? The Board of Directors needs to close this unethical loophole if there is any hope of the Appraisal Institute rising again to claw back the greatness it once possessed.

By the way, the current Appraisal Institute national Board of Directors [6] is comprised of 27 members, with 23 men but only 4 women. Twenty of the board members are the chair and vice-chairs of the ten AI regions. Only 6 board members are needed to vote in favor of the petition to insert a new Amorin lackey to enable lavish expense accounts and travel as I’ve previously written about, funded by hard-working appraiser members who have invested a considerable amount of time and money for their Appraisal Institute designations.

First Time Petition Process – created and implemented
Now there is uncertainty on Craig’s nomination because the petition process that was created back more than a decade ago when a female from Wyoming was publicly nominated like Craig and was replaced by a board choice through the petition maneuver, ignoring the nominating committee results.

Leslie Sellers was on the board then and was quite upset that he did not get the nomination but was able to vote for himself using this maneuver. Industry feedback suggests that AI Presidents [7] from 2007 to 2010 seem to have been behind the petition process, inserting it in the bylaws to get Sellers into the ladder to ascend to the presidency two years later. I’d invite any of these former presidents, to refute this with credible, verifiable evidence to counter my own experiences and what many members have told me over the years.

Then 2010 president Leslie Sellers was the reason I disassociated with the Appraisal Institute in 2010 after he withdrew AI from the Appraisal Foundation for no stated reason that made sense. My tipping point was that he had posted a video saying to the effect that he was thrilled about the future opportunities that awaited the organization. Well, a subsequent 30% drop in membership, over the next decade, a steeper decline than licensed/certified appraisers in the national registry, and a collapse in credibility in Washington seems to refute that.

Jim Amorin became the first two-time President [7] in the Appraisal Institute’s history using the petition process election maneuver to bypass the nominating committee’s decision. There were other very worthy candidates who were not considered at all. He went on to somehow obtain his current CEO position without a real effort by the organization to look outside when the former CEO essentially left in the middle of the night – I knew one highly qualified CEO applicant that wasn’t seriously interviewed – when the Appraisal Institute was bleeding relevance and needed to bring in new blood.

AI CEO Jim Amorin ($450K/year) disagreed and used the petition process to make Michael Tankersley the Second Vice President and doesn’t have to give a reason. Mark Linne stepped away from being considered. In other words, the membership nomination process that is supposed to be separate from the executives running the organization is wildly compromised. I am not critical of Michael Tankersley as an appraiser because I know nothing other than his credentials, but I am certainly disappointed that someone with outstanding professional credentials would be willing to circumvent the membership-driven process for personal advancement.

The following text is the email that was sent by National to members about the election. Notice how they do not explain that the petition process occurred and how the TWO candidates came about? Shameful.

On August 6-7, 2020, the national Board of Directors will elect the 2021 Vice President of the Appraisal Institute from two nominees, Craig Steinley and Michael Tankersley. You submitted a communication to the National Nominating Committee regarding one or both of those nominees. The purpose of this email is to ask whether you would like us to provide a copy of your communication to the Board of Directors for consideration. The nominees, even though they serve on the Board, will not receive a copy of the communication if you choose to release it to the Board. Please respond to aielection@appraisalinstitute.org letting us know of your wishes by July 13, 2020.

We look forward to hearing from you.

The national membership submits candidates to their regional heads for the three-year path to the presidency of the Appraisal Institute. The national nominating committee, which is supposed to be separate from the operations executives for ethics concerns, vets the nominations and selects the one they feel is best qualified and then announces the choice to the public. The petition process created and inserted by former AI presidents over a decade ago subverts the word of the membership by only requiring 6 board votes and can include board members who can vote for themself, to what can only be viewed as self-dealing, violating the separation between operations and annual appraisal executives as well as shaming nominated executives – the best and brightest the membership has to offer – for their own self-dealing.

This is the problem with the current AI leadership and something I have been writing about since 2016: The national leadership is not thinking about their members, and they need to be, or the organization will die faster than it already is. I hope this is a wake-up call to current board members [6] to do something about this internal corruption.

I want nothing less than for the Appraisal Institute to return to its former glory or get out of the way to stop damaging the livelihoods of its members and the industry’s reputation.

How to do something about this
If you want to do something about that, please reach out to the regional heads who are also board members [6] to voice your dissatisfaction and be heard. Either let your voice be heard about this sham election or agree to let this mark the end of what was the gold standard in property valuation organizations before the pivot circa 2007.

Since I am not a member I don’t have access to the ten regional chair contact info to voice your complaints but you can see them on the Board of Directors landing page [6]. There truly are a lot of good people on this board and they need to hear your voice and stop this corruption of the election process.

Incidentally, here is the letter that went out to the Board of Directors. Note that 492 signed the letter, 392 AI people, 6 of the 10 NNC members, and Mark Linné (3rd Candidate). 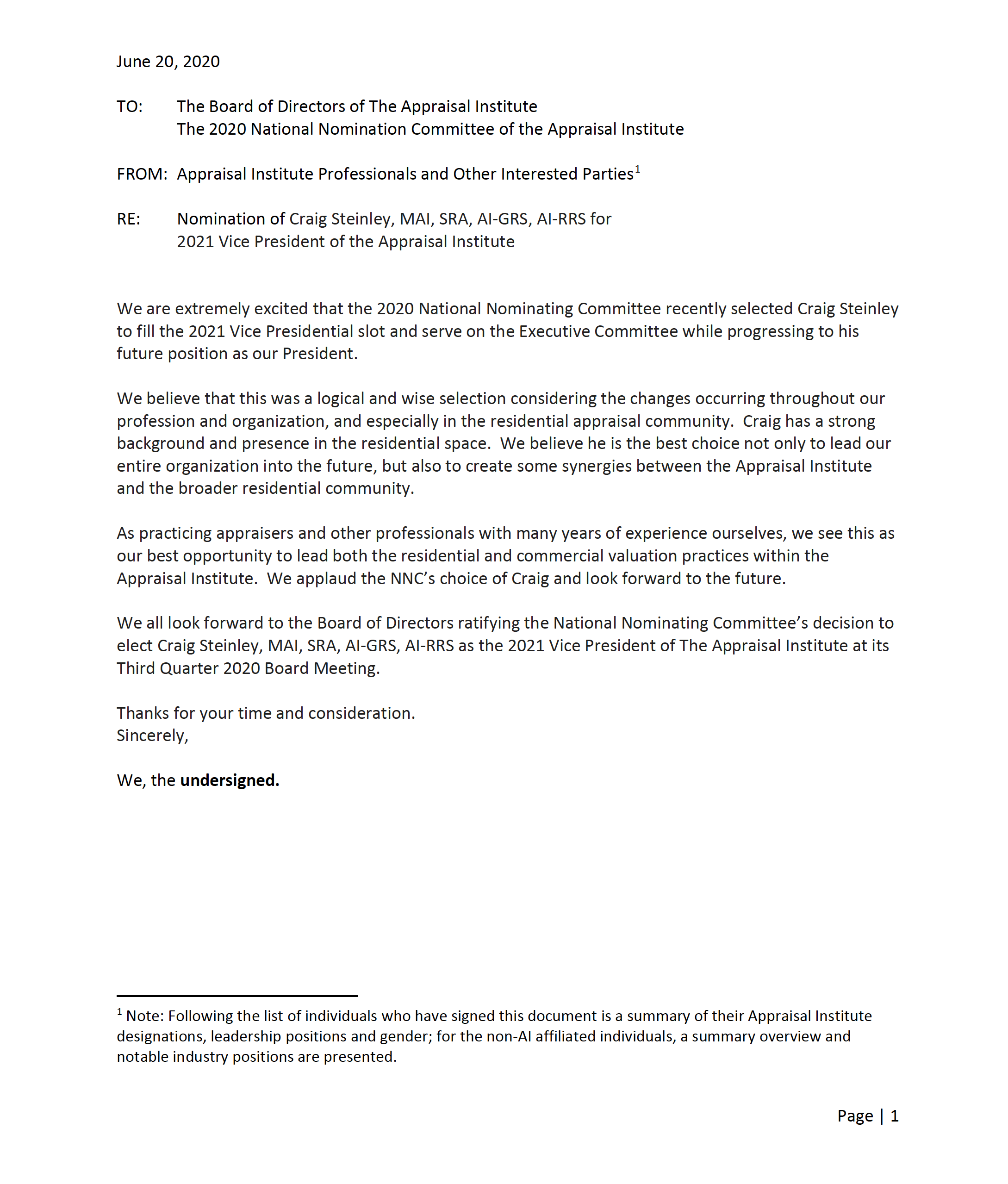 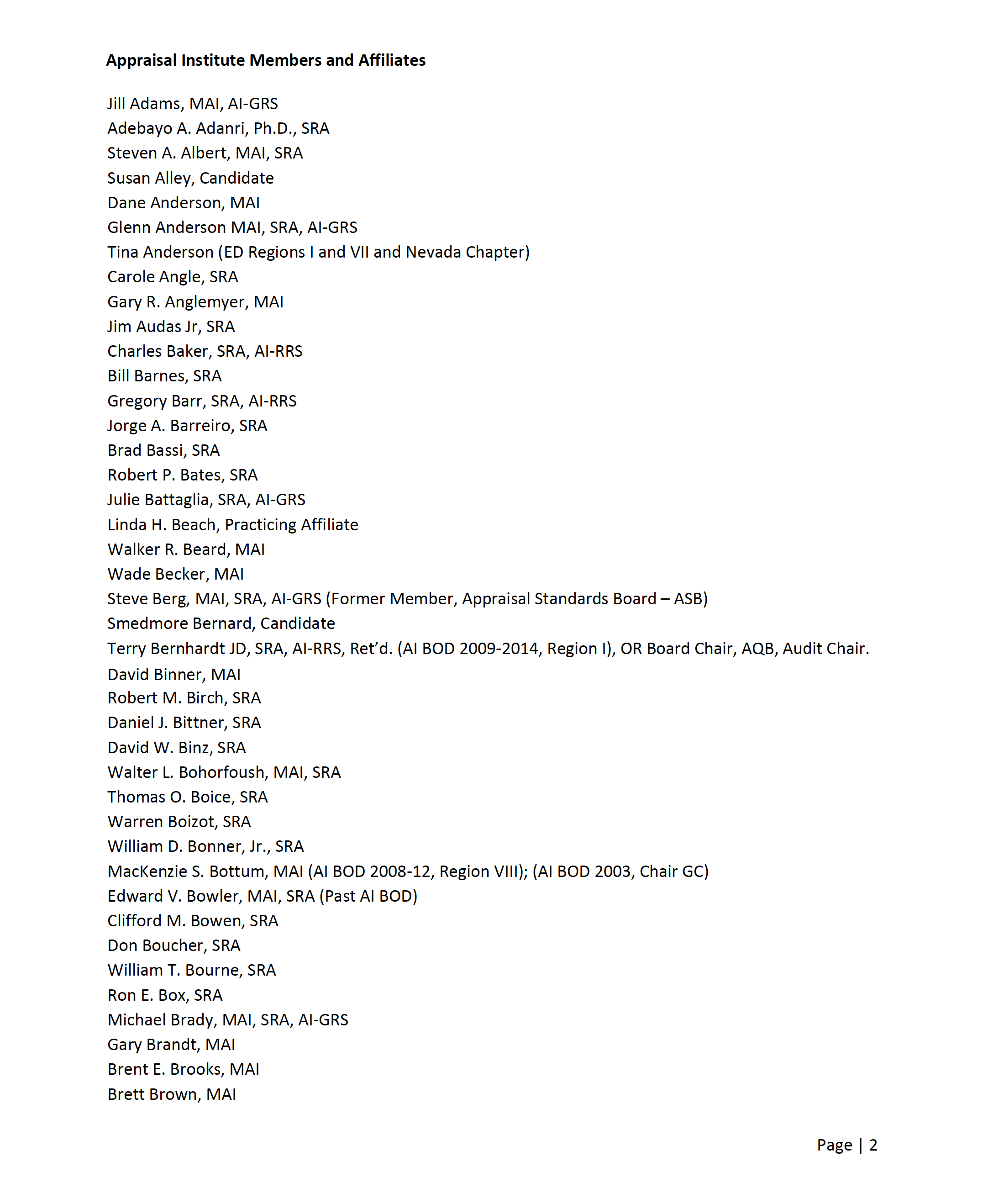 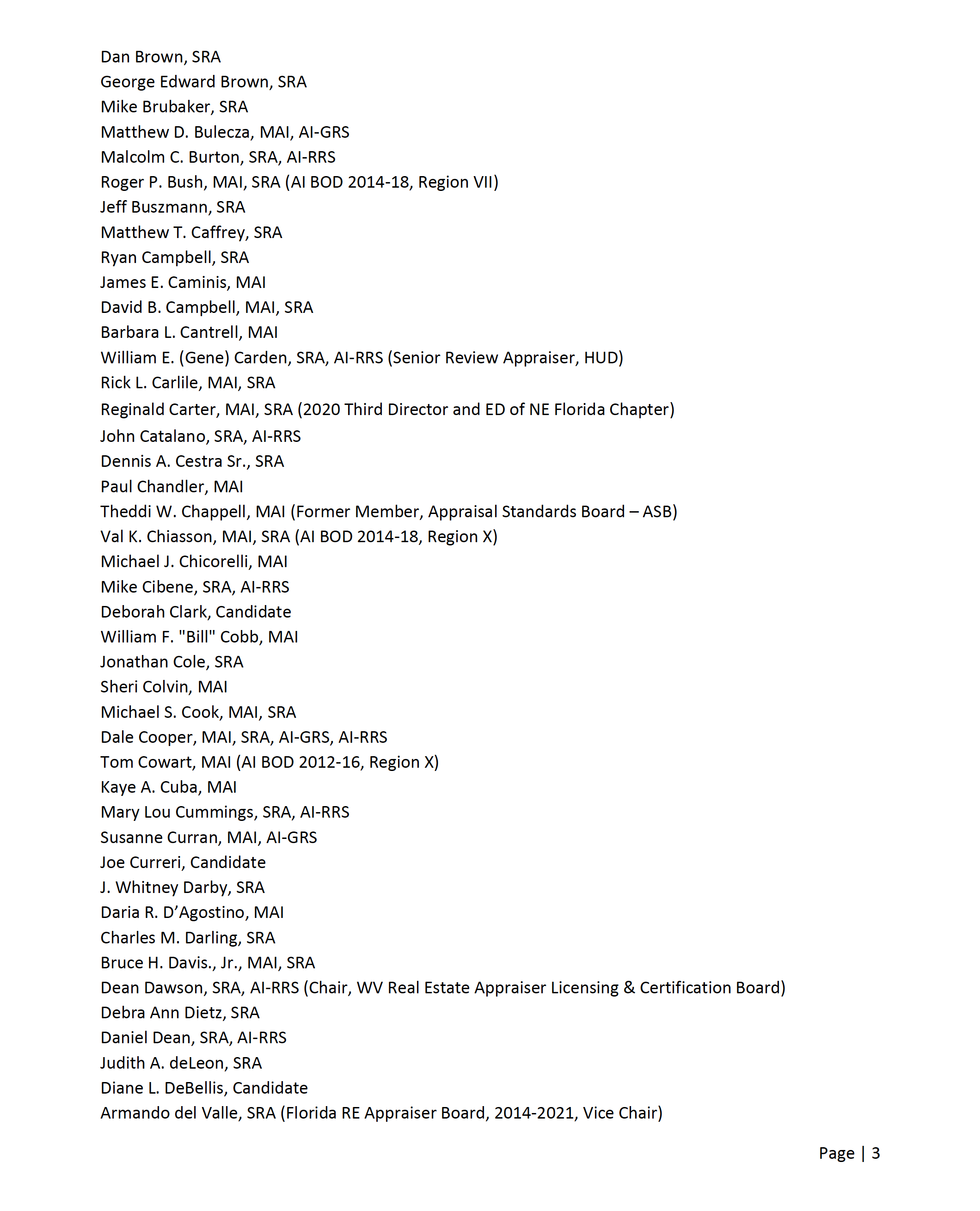 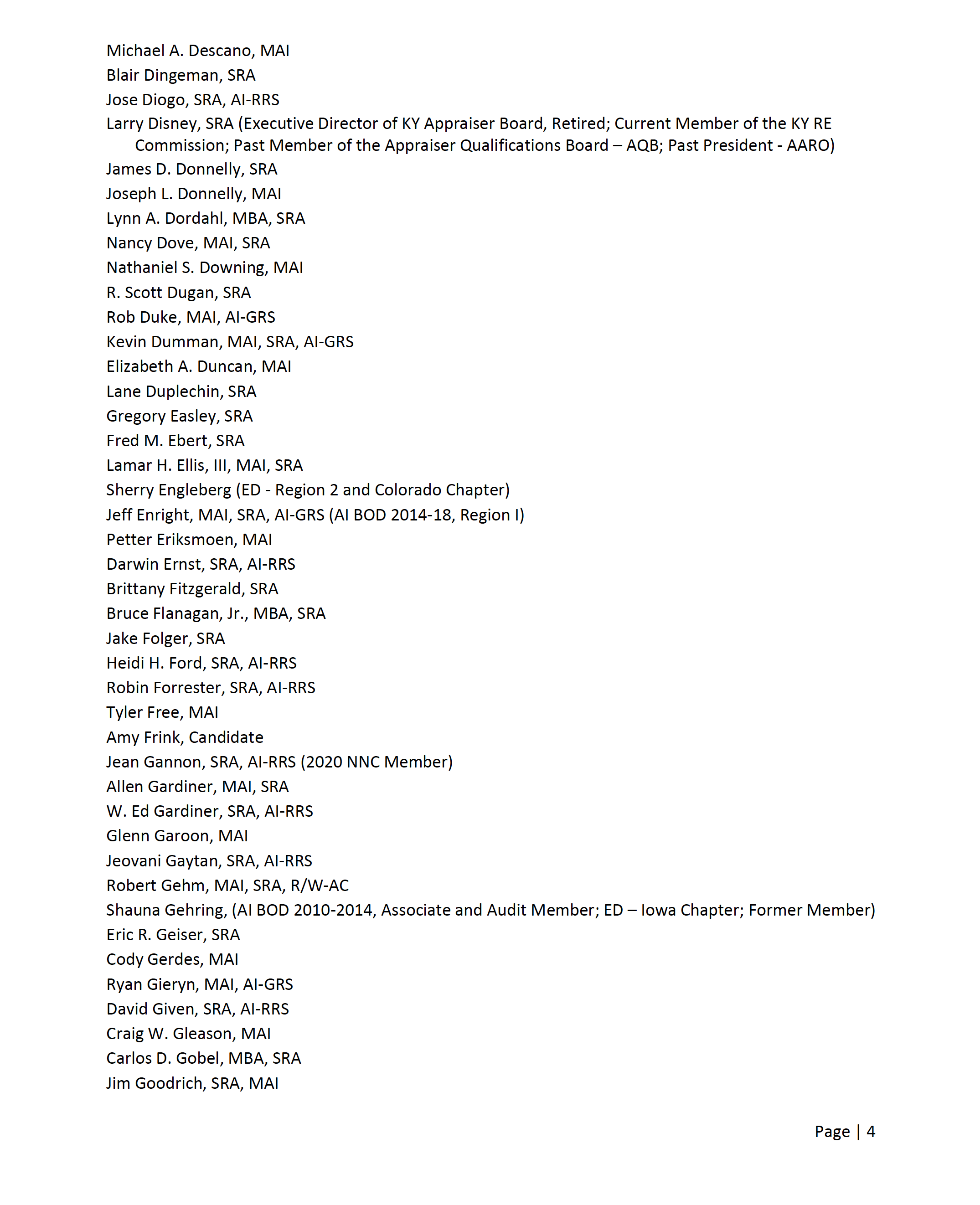 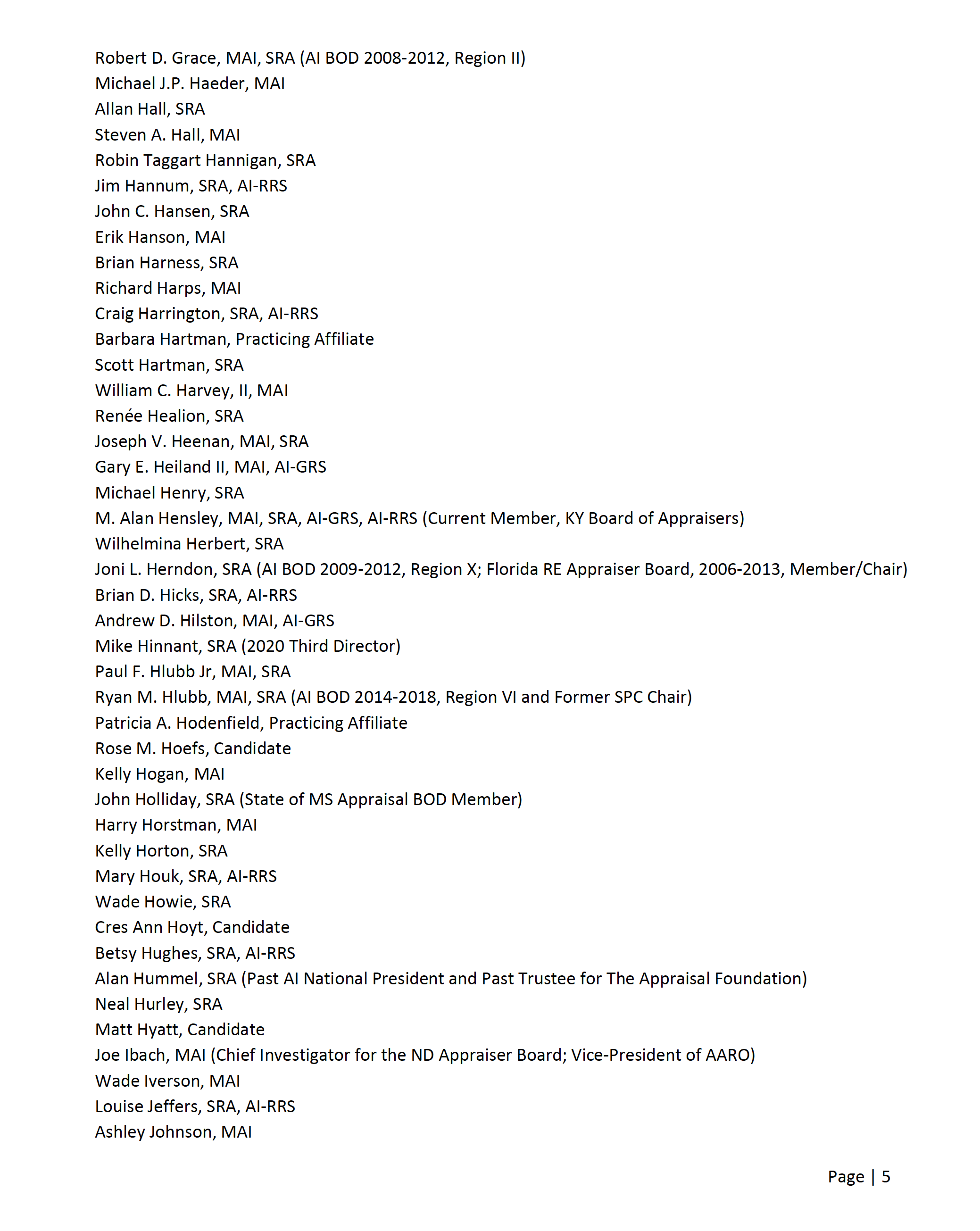 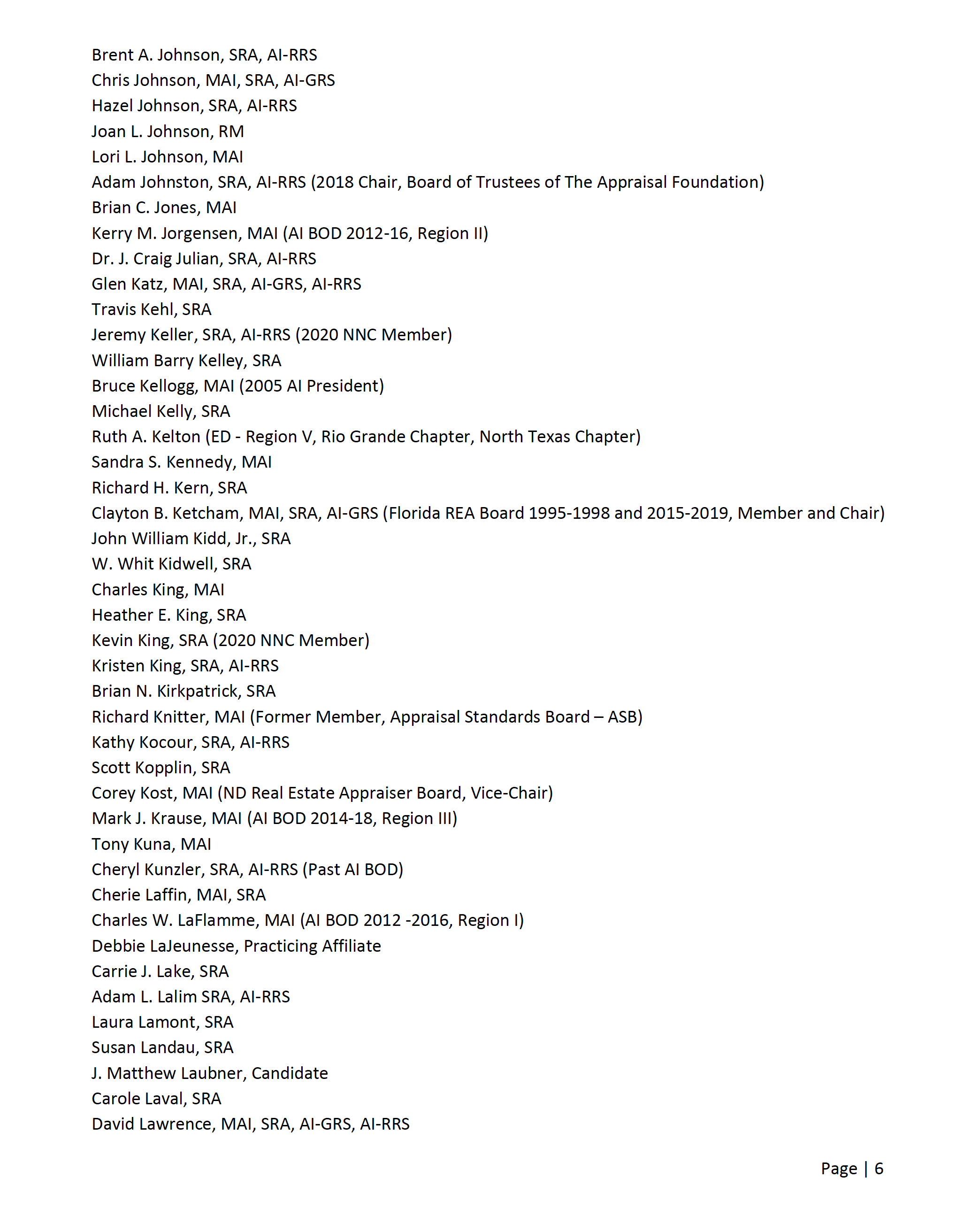 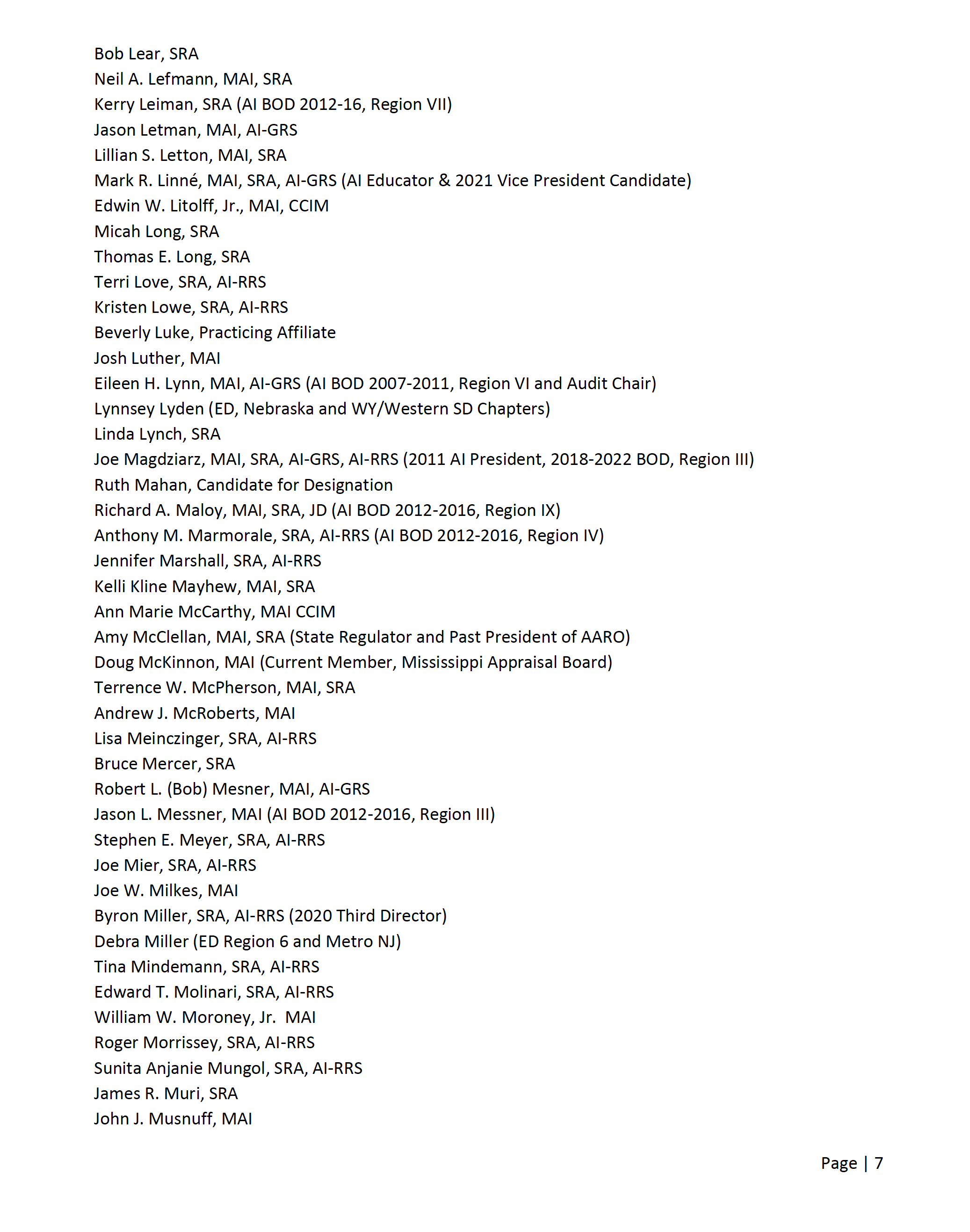 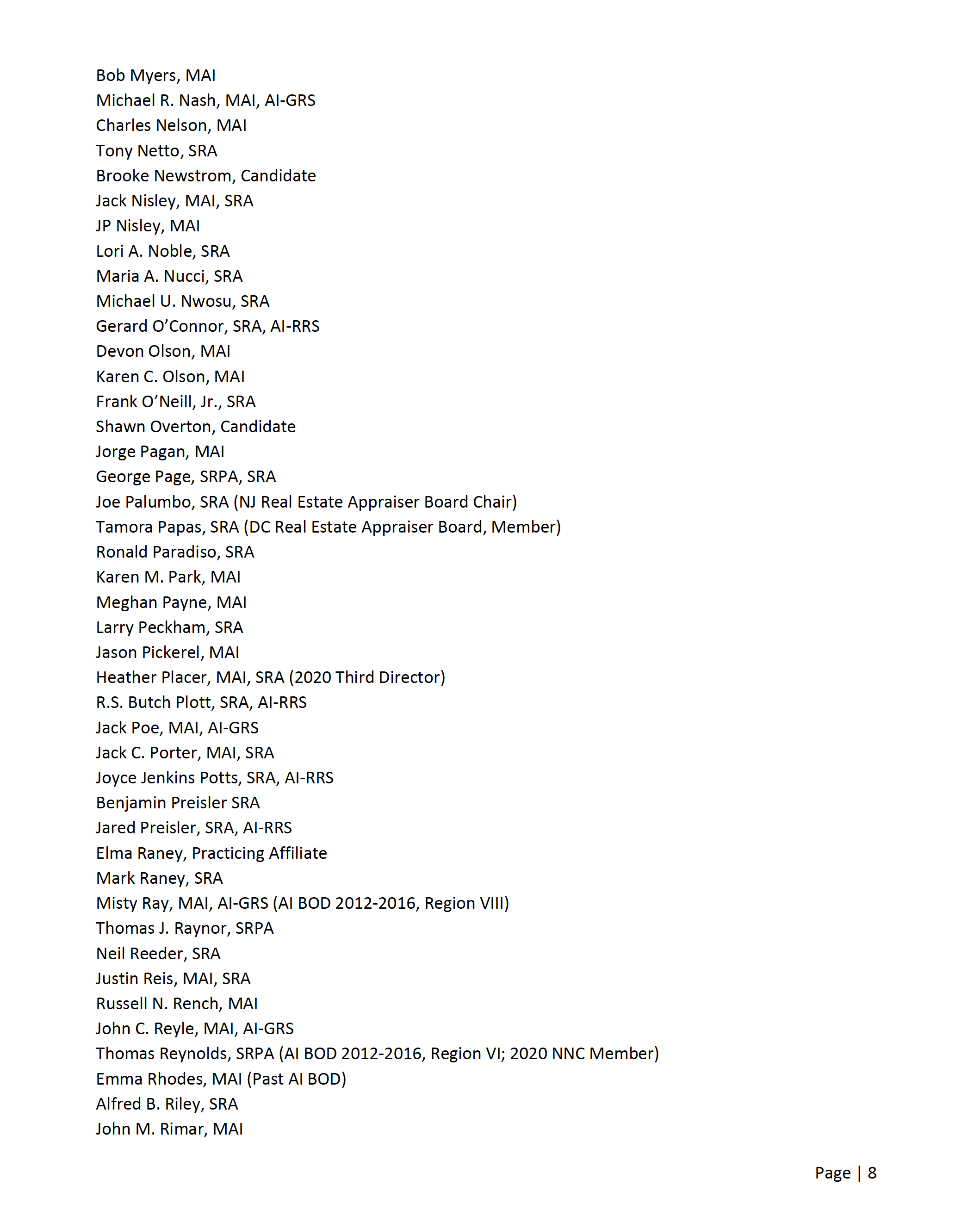 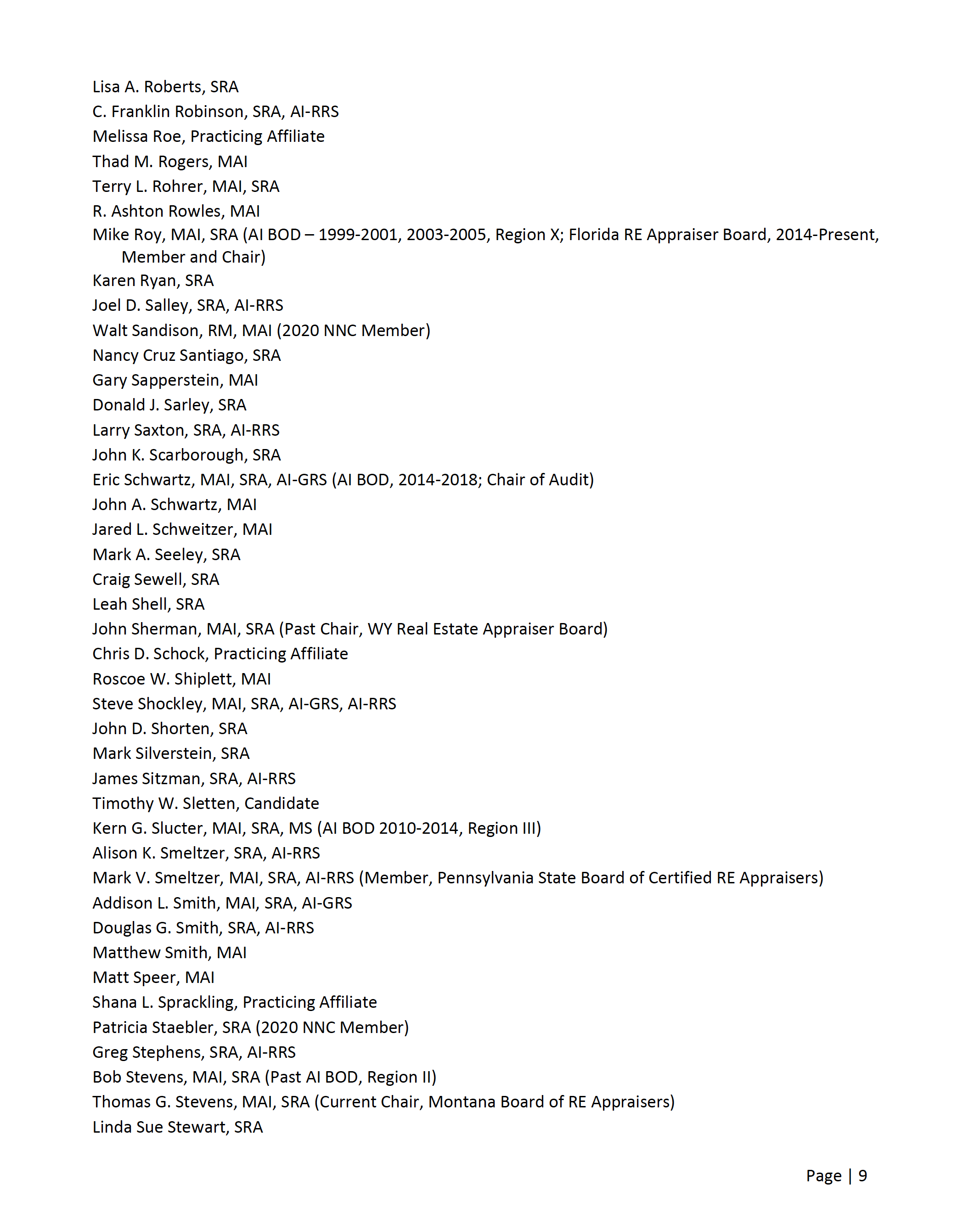 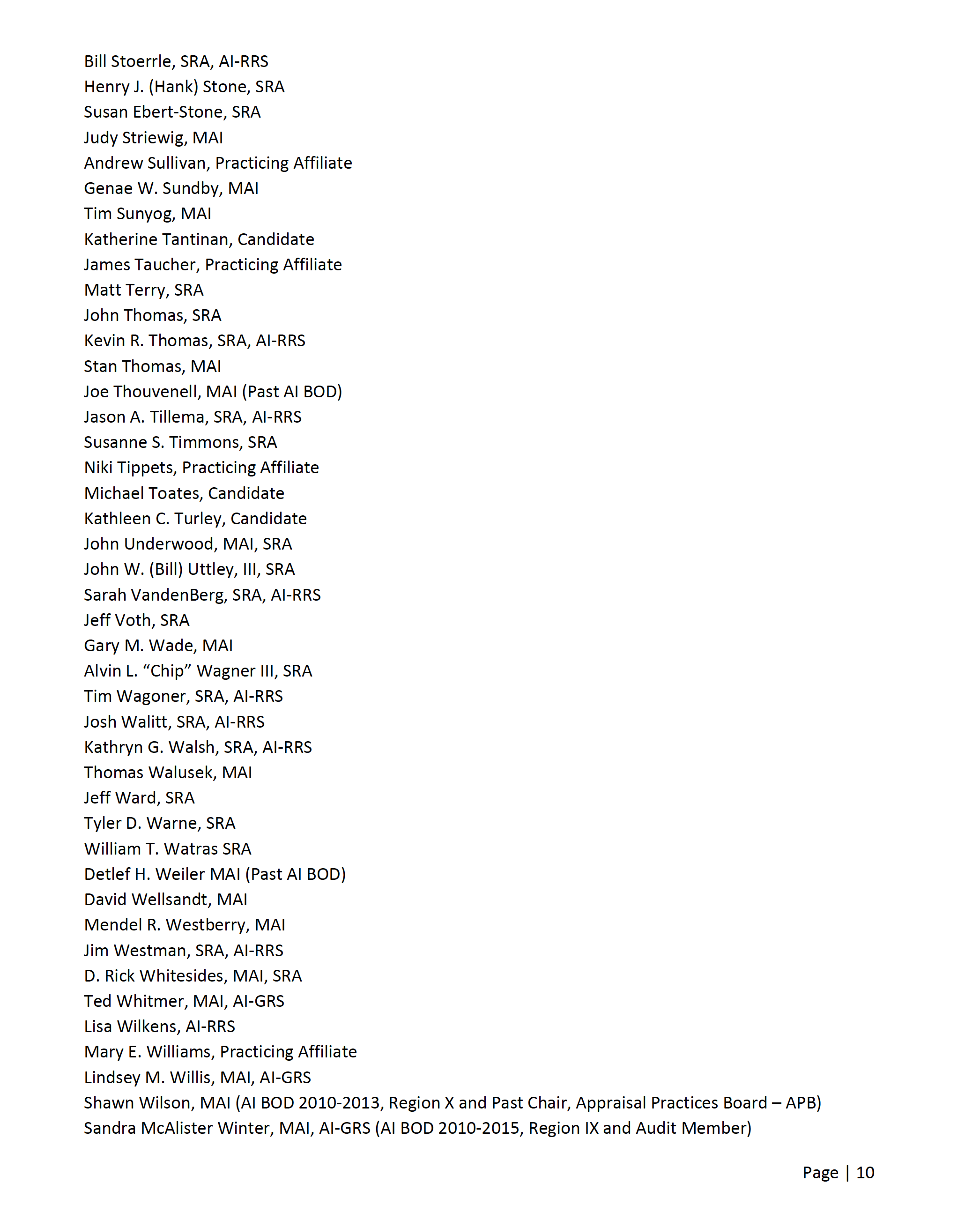 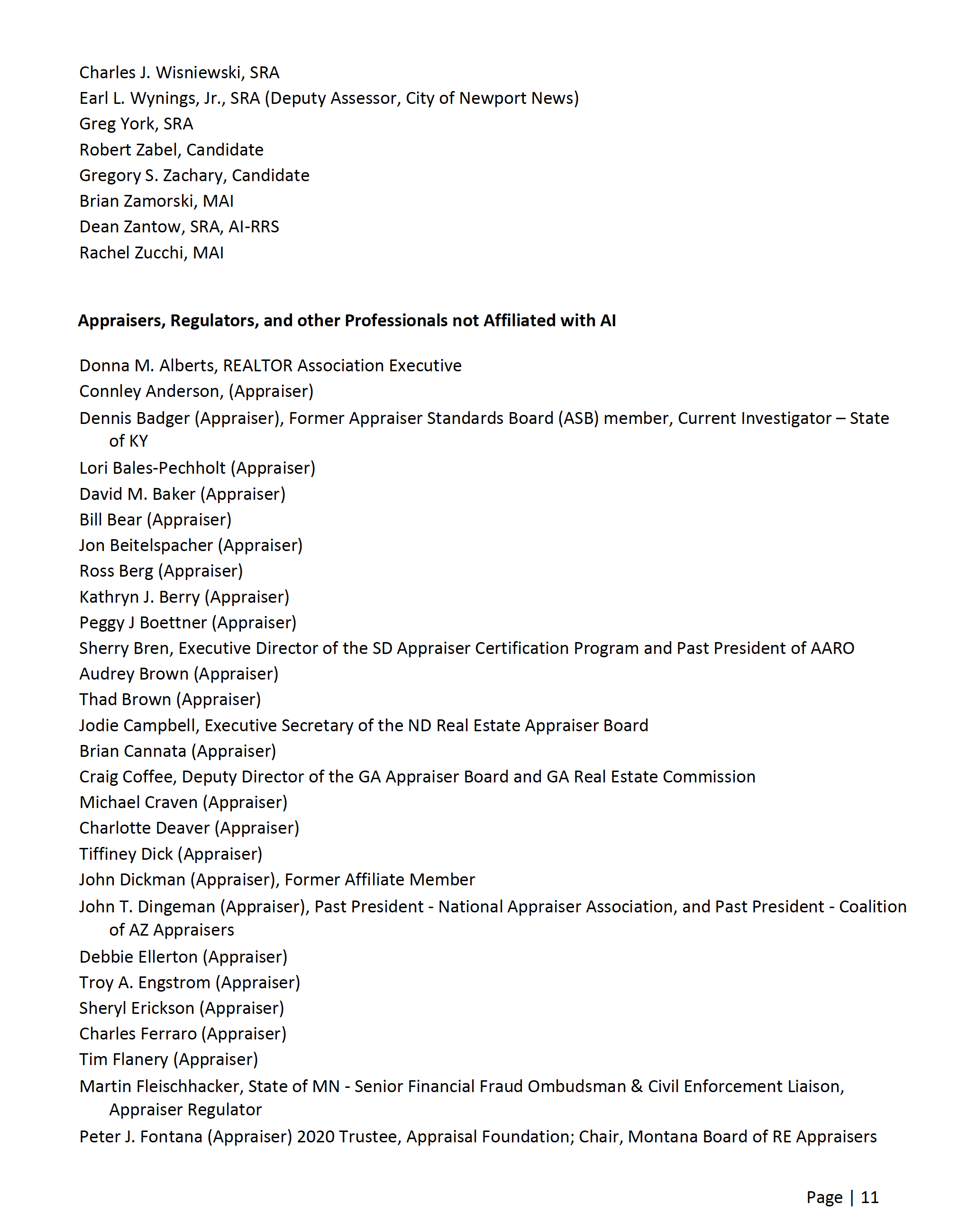 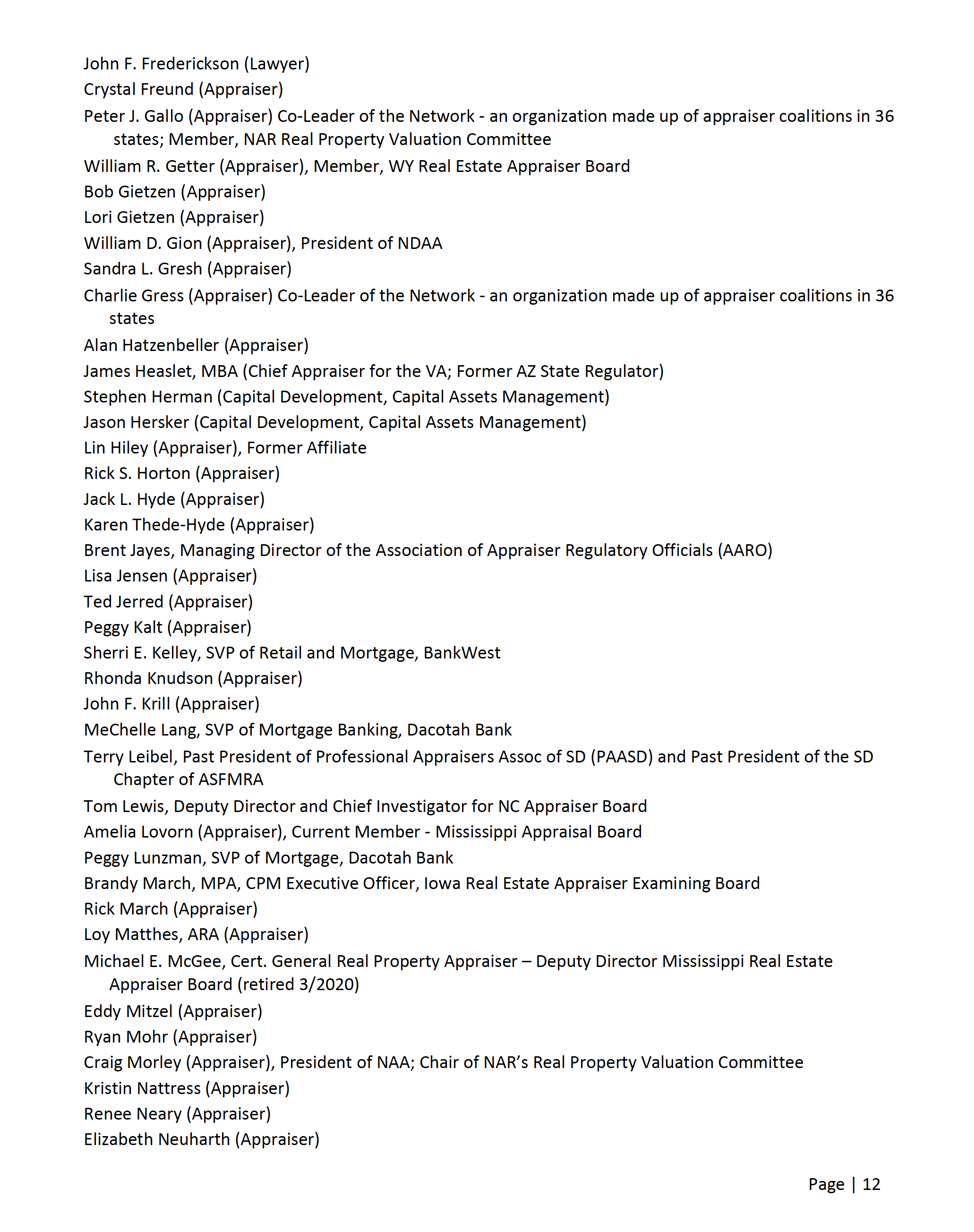 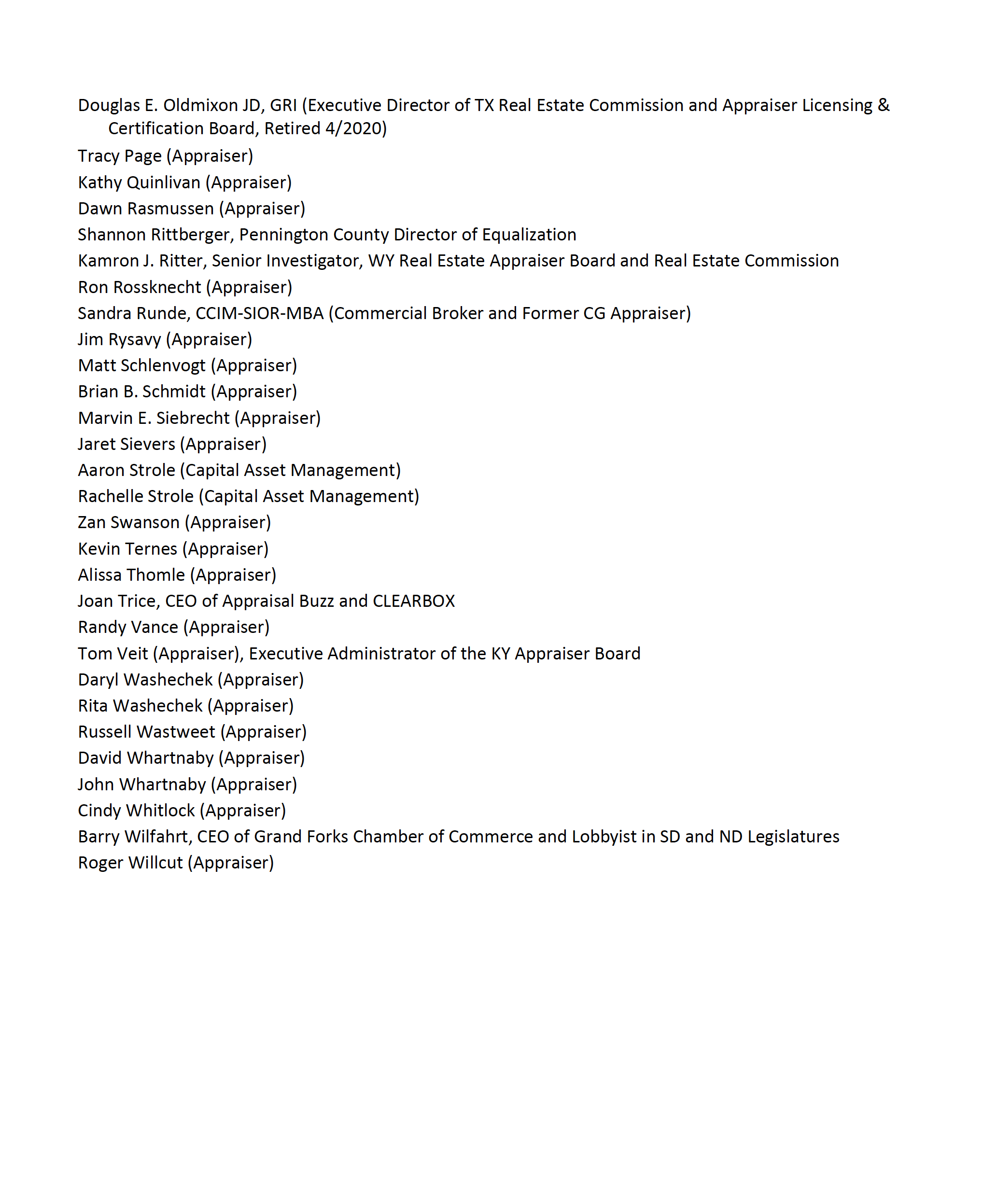 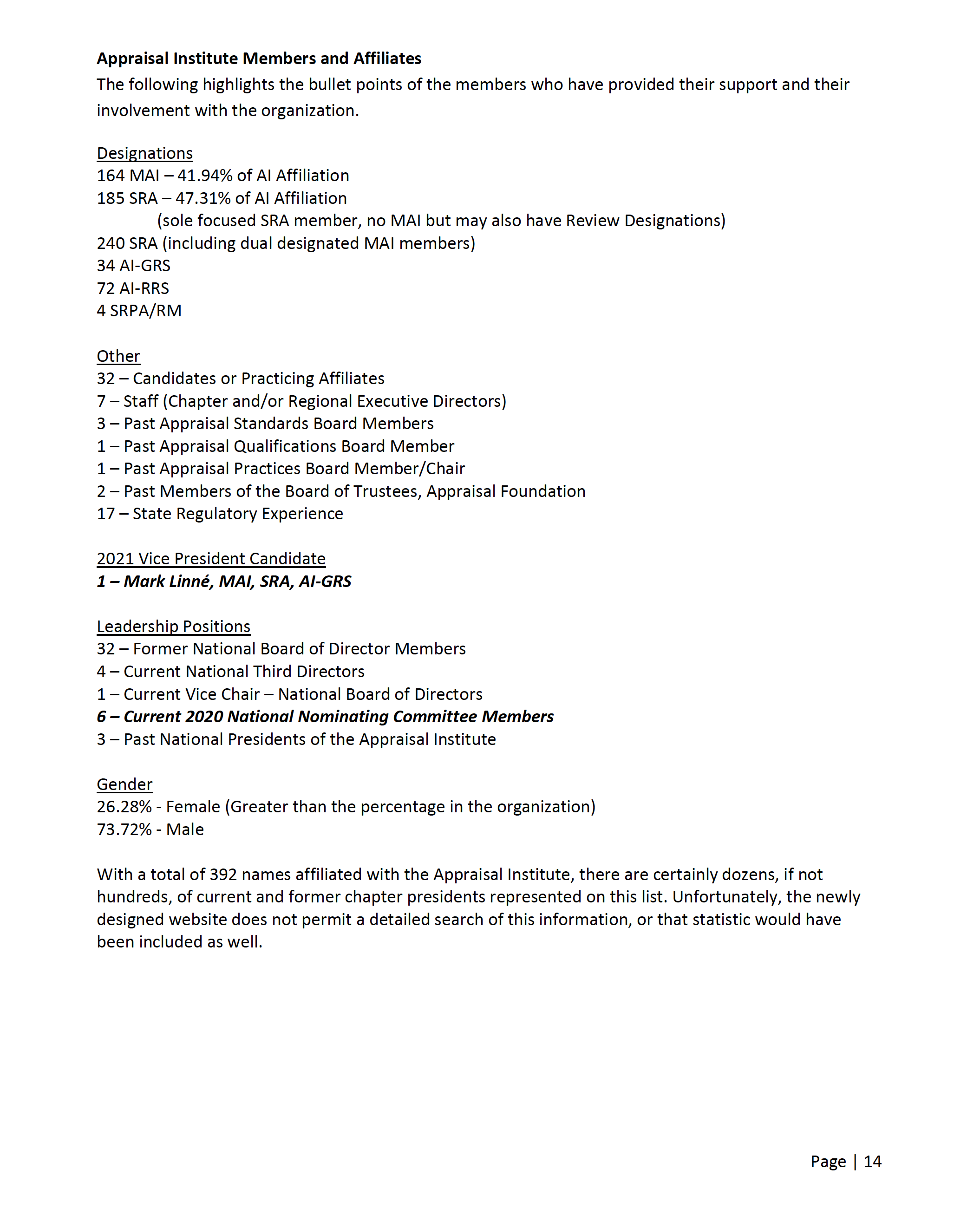 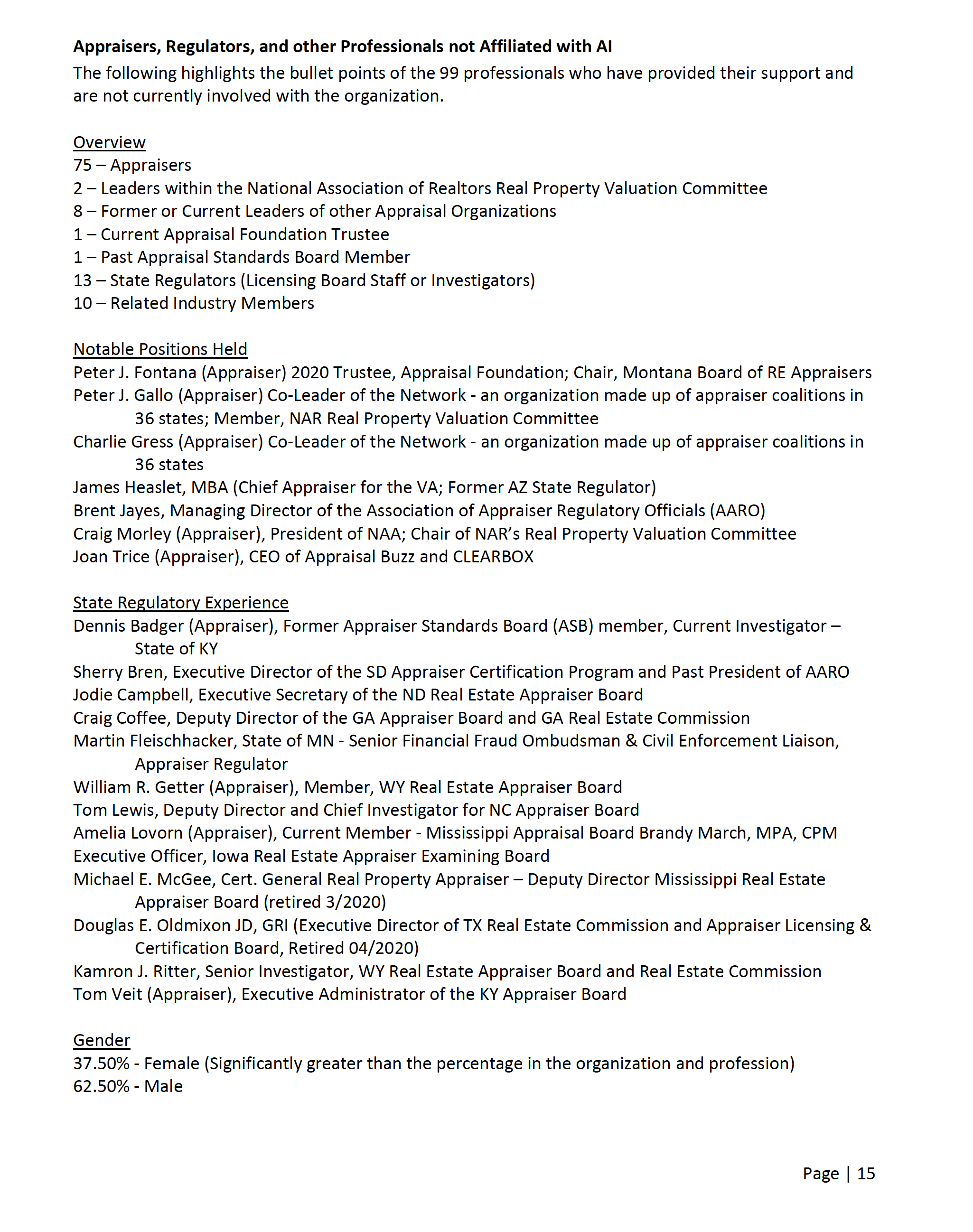