The Beige Book was released today [2], an anecdotal description of the economies of the 12 member banks of the Federal Reserve. I’ve always liked it as a way to understand what is going on in the region. It is prepared 8x per year in advance of each FOMC meeting, where financial policy is set. 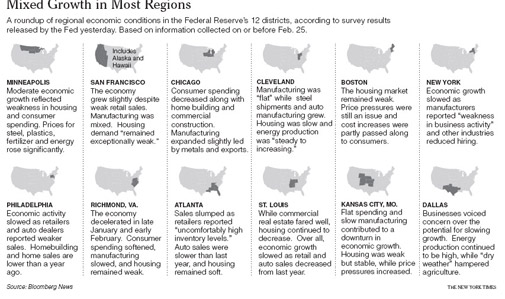 Here’s a summary graphic of each district’s condition [3] in today’s Beige Book. Here’s a good summary article by the NYT’s Floyd Norris [4].

Residential real estate markets were generally weak over the last couple of months. Sales were low in every District with very few local exceptions. Sales declines were particularly large in the Boston, Minneapolis, Richmond, and St. Louis Districts; at least some respondents in each of these Districts reported drops in home sales of more than 20 percent year-over-year. Contacts in the Chicago, Kansas City, and Philadelphia Districts cited tight credit conditions as a reason for low sales; each of those Districts either reported or expected stabilization of demand for homes in the low and mid-price ranges.

Districts that reported home prices all saw overall declines; one exception was the Manhattan co-op and condo market, where prices increased 5 percent compared with a year ago [6]. Inventories remained high as demand was still fairly low. A few contacts in the Chicago, Cleveland, and Richmond Districts reported an increase in inquiries, although this increase in traffic had not yet translated into increased sales. Residential construction declined or remained at low levels in most Districts.

There doesn’t seem to be a lot to cheer about, does there?