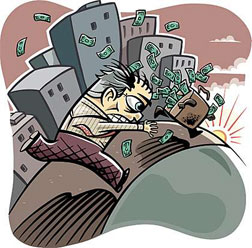 While I am not arguing about the fact that the subprime mortgage situation is played havoc on many Americans personal financial situation and the net effect has not been good, I have been questioning the overall way the situation has been portrayed. I did this last year [1] and again here [2].

Kenneth Harney’s The Nation’s Housing addresses this topic quite well in: Finding Bright Spots Among the Dark Clouds [3] were he provides greater insight than the press releases dished out by the Mortgage Bankers Association [4] and RealtyTrac [5] whenever foreclosure numbers are released.

Harvey has a bunch of foreclosure stats, good and bad, crammed in the article. For sake of argument, I cherry-picked the positive stats.

Its all about the mix right now. There are four states that are skewing the foreclosure mix and these locations were characterized by significant investor speculation during the housing boom. The foreclosure situation will likely erode further before it gets better, especially if we slip into a recession in early ’08