The spike in gasoline prices occurred before the wrath of hurricanes in late summer. After adjusting for inflation, rising gasoline prices pre-hurricane were still relatively low in historical terms and perhaps thats why inflation had remained low. At that time, bond investors viewed the sharp increase as more likely to provide a drag on the economy rather than stir up inflation concerns.

However, that can be a bit simplistic since the economic engine is built around lower price levels than we are currently experiencing. The persistence of high gasoline prices may be one of the primary inflation catalysts as as core inflation (excluding food and energy) is virtually flat. To make matters worse, oil companies are now posting record profits [Marketwatch] [2] which is of particular concern to many since the gasoline prices have risen so much in such a short period of time. 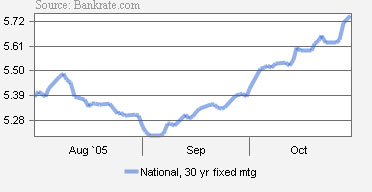 Inflationary pressures are now beginning to influence a modest rise in mortgage rates.