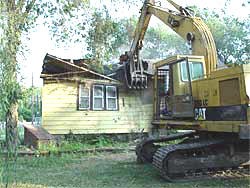 In Nicole Gelina’s article for City Journal They’re Taking Away Your Property for What? [1] covers the backlash of the controversial Kelo v. City of New London eminent domain [Wikipedia] [2] ruling last summer that rattled the concept of private property.

…what critics haven’t noticed is that the decision simply expands the Court’s approval of a practice that state and local governments have long used to bring about urban renewal or economic development. More important, they have also failed to notice that, over its long history, this practice has almost never worked. The Court’s decision fails not just on moral but also on utilitarian grounds.

“50 years ago the Court replaced the “public use” rationale for eminent domain with a more nebulous concept of “public purpose,” in order to allow cities to condemn slums to remove urban blight. “

In Kelo, the 5-4 majority went a step further, ruling that governments don’t need to show that property they condemn is even nominally blighted

“the vague promise of higher tax revenues and the hope of private-sector jobs through planned development are no less public goods than a road or a water-treatment plant. And so the Court allowed New London, Connecticut, to condemn a middle-class waterfront neighborhood and to parcel it out to private developers who would make more lucrative use of the property, including building luxury condos.”

In the post Concern over the Kelo case has also inspired a flurry of legislation at the national and local level. [Gotham Gazette] [5]

“In Congress, a bill, dubbed the “Private Property Rights Protection Act of 2005, has already passed the House and is awaiting a vote in the Senate. It would withhold federal aid from states that Congress believes abuse eminent domain.

In New York, there are several bills being considered in Albany, including a package of legislation drafted by Assemblymember Richard Brodsky which would slow down local eminent domain proceedings, create an ombudsman to oversee the use of the law, and require 150 percent of market value be paid for private property that the government takes over. This week, the New York City Council will hold hearings on the subject.

And recently opponents of eminent domain claimed victory when the U.S. Court of Appeals ruled that the city of Port Chester, New York failed to properly alert a businessman of his right to challenge an eminent domain decision before the government seized his four buildings to make way for a convenience store. The court’s decision, some said, was a warning to local governments who may be tempted to take private property without properly notifying the people who own it.”