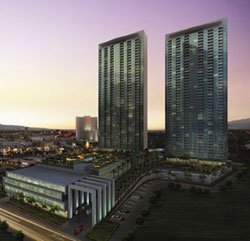 The cancellation of two high profile developments in Las Vegas (there are others) has resulted in lawsuits by purchasers of units in the Vegas Icon [1] by the Related Companies and Vegas Grand [2] by Del American. Dan Ackman in his article Condo-Mania in the ‘Wild, Wild West’ [WSJ] [3]

In one lawsuit, would-be condo buyers are suing the developers of the Vegas Icon condominium project — affiliates of the New York-based Related Companies — which announced plans to build and then cancelled the project. In another, filed by the same group of lawyers and settled last week, the plaintiffs had entered into reservation agreements, which involved putting some money down, to buy units in a project called Vegas Grand, just off the Las Vegas Strip, at specified prices. But the developers, Del American, based in Altamonte Springs, Fla., cancelled the reservations.

At the Vegas Grand the buyers had reservations and the developer settled for 2.5% of the purchase price. The developers backed out because of rising construction costs.

The situation at the Vegas Icon was similar. Rising construction costs made the project too expensive for the developer. The buyers signed contracts, not reservations, and the buyers sued to have the contracts enforced and the new developer (whomever Related sells the site to) has to build units for these buyers.

How can buyers at the Icon be assured that they would get the equivalent value for their investment? In other words, would the the new building be configured with the same type of units? Or look at it another way…