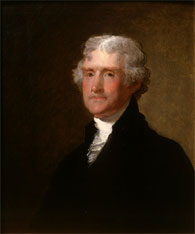 In this Planetizen post [1] the author Leonardo Vazquez postulates:

He told James Madison: “I think our governments will remain virtuous for many centuries as long as they are chiefly agricultural; and this will be as long as there shall be vacant lands in any part of America. When they get plied upon one another in large cities, as in Europe, they will become corrupt as in Europe.”

As a writer, philosopher and leader, Jefferson was able to hard-wire an anti-urban bias into the culture of the United States. Consider the U.S. Constitution. What power does it give to cities and towns? None, nada, zip. In fact, the Constitution doesn’t even mention cities and towns. It does give a lot of power to states. And states get more power — through representatives — by increasing their population.

It’s a formula for urban sprawl and weak cities. States need to grow to get more representatives and more political power. State politicians could try getting more people into urban areas by encouraging compact development. But that would risk giving more electoral power to cities, which Jefferson and his friends and followers (the “Jeffersonians”) thought were corrupt. The result? Encourage people to scatter on large plots of land — of course after removing the Native Americans who happened to be living there at the time.

Its a good article. We have had recent posts on sprawl and new urbanism (bringing town centers to suburban areas). Here’s a good resource that covers sprawl [National Geographic]. [2]