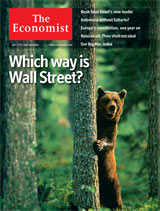 The Economist magazine has been bearish on housing since at least 2002. The current issue is no exception.

[My apologies in advance to those who do not have a subscription, but its well worth getting one. -ed]

The current cover story features the image a bear: Despite the rattled markets, the world economy is still relatively strong. Just don’t bet your house on it [The Economist] [1].

They seem to be less concerned with the equities markets and more concerned about the housing market in the US and its global implications.

By borrowing against the surging prices of their homes, American consumers have been able to keep on spending. The housing market is already coming off the boil. If prices merely flatten, the economy could slow sharply as consumer spending and construction are squeezed. If house prices fall as a result of higher bond yields, the American economy could even dip into recession. Less spending and more saving is just what America needs to reduce its current-account deficit, but for American households used to years of plenty it will hurt.

My beef with the Economist, is their love affair with the rental market and its relationship to owner occupied housing. The rental equivalent of owner occupancy, because it is less than the cost of housing, portends certain doom from their view point. This has always struck me as overly simplistic. For many reasons, an investment property is rarely of the same quality or caliber as an owner occupied property and reflects different motivations and buyers. This is the same flawed rationale that includes the rental equivalent of housing in our CPI stats rather than using actual sales stats to represent the housing market. Rental markets have not behaved like the owner occupied markets have during this recent housing boom.

I think its more directly related to affordability. Low mortgage rates have been the key driver of this boom and any other factors are minor in comparison.

In fact their focus on this point has gotten to be the source of some rather dark humor in economics circles. However, the tone of this article seems to back-pedal this 5 year argument a bit, providing both a hard and soft landing scenario.

Here’s a sample of articles for each of the past several years that repeatedly show their view point that the American housing market is headed for a hard landing.

The current bear article seems to be calling for the Fed to continue rate increases because for the world, it is best that America slows today. Later, imbalances will loom even larger. The Economist seems to be saying that inaction by the Fed now would raise the odds significantly that we could see a recession in 2007 as a result.

I contend that the slowing housing market has not been fully represented in the current array of economic stats, and when it does, a recession is already possible without anymore increases by the Fed.