This weekend, there was an Op-Ed piece by Tim and Nina Zagat, publisher of the Zagat Survey [1] guides called There Goes the Neighborhood [NYT]. [2] The idea here is that, of the two conversations that dominate get togethers — real estate and the latest new restaurant — the new restaurant is more important. 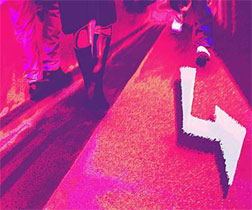 Trendy new restaurants are often found in upcoming real estate areas. “It starts when adventurous nightlife-seekers set their sights on an out-of-the-way or underdeveloped area where the bars and clubs give them the freedom to cut loose. Capitalizing on the scene, a handful of restaurateurs then set up shop to nourish the now hungry hordes. And finally, as more restaurants with more offerings take root, people recognize the viability of the neighborhood as a place to live and work.”

This pattern is consistent with gentrification [Wikipedia] [3] of areas such as Soho, Tribeca, MePa, SoBro, Park Slope and Williamsburg in New York, Hoboken, NJ and in many other urban areas across the country.

Sometimes there can be a backlash, like Manhattan experienced in the 1980’s, especially in the East Village, which saw protests and the adoption of the phrase “Die Yuppie Scum” [Univ of Minn. Press] [4] as the rallying cry for activists.

One of the patterns of the current housing boom, as compared to the prior boom in the 1980’s, is that both this boom and the overall economy have been improving for a long enough period of time to allow many emerging neighborhoods to adequately develop residential support services. The adequate supply of groceries, dry cleaners, restaurants, drug stores, etc. in many of these markets is expected to help stabilize neighborhoods should the residential market cool off. Many of these areas have developed their own “legs,” rather than depending on the services of nearby areas. Nobody wants to walk 20 blocks to a grocery store indefinitely.