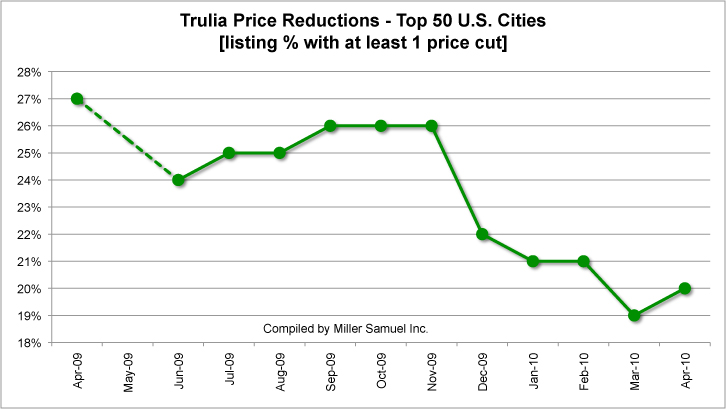 Note: I don’t have the May 2009 number, hence the dotted line (can anyone at Trulia share it with me?)

The report indicated that the number of price reductions and the size of reductions are beginning to abate. [4] CEO Pete Flint, nails my sentiment on this “good news” with pin point accuracy (ie lots of headwinds over the next year so lets not over-hype the good news).

“With such a dramatic drop in home price reductions over the past year, we’re beginning to see early signs of stabilization in the housing market on a national level, as well as locally in certain markets,” said Pete Flint, Trulia co-founder and CEO. “As the federal stimulus comes to an end this month, coupled with expected increases in interest rates and foreclosures, the next few months will be very telling for whether the U.S. housing market can be self-sustaining over the longer-term. Trulia will continue to track price reductions going forward as an indicator of health in real estate market.”

The table seems to show that markets that saw large price declines early on have less price reduction activity now suggesting that, at least for now, their markets don’t have large swaths of listing price declines ahead of them as properties approach market value.

I do believe that the likelihood of additional declines in the US housing market in the latter half of 2010 are very possible give the factors that Pete cited in his quote above.

Still, its better news than we’ve grown accustomed to and we’ll take it for now.