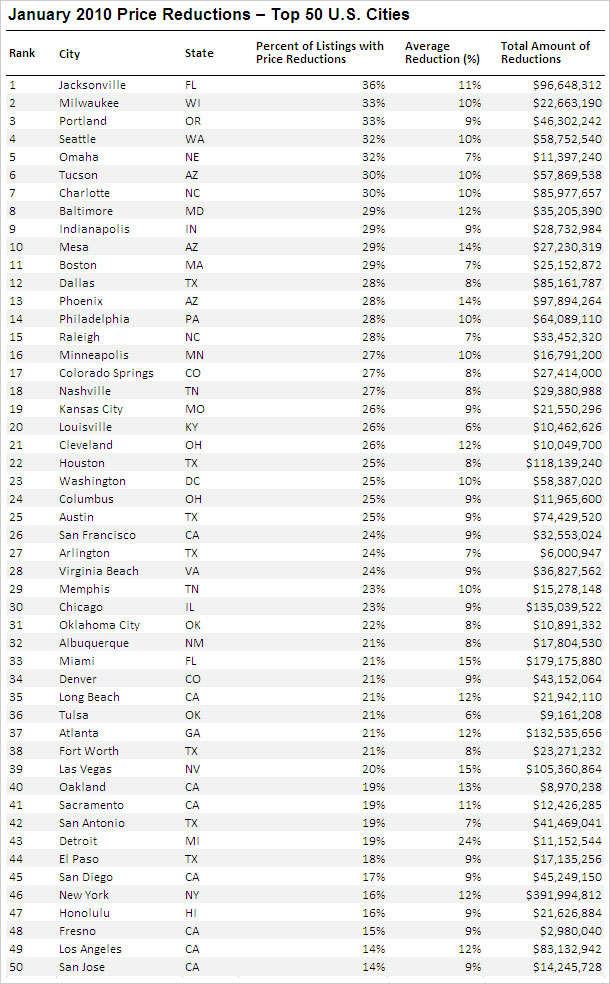 Trulia released its Price Reduction Report [3] for January and the results are interesting. Actually Trulia released the report last week, but between the NYC Inman conference and a timed out web server, I am finally posting it along with my backlogged items.

The report has shown price reductions trends on homes that have at have had at least one reduction.

The total amount slashed from home prices also dropped to $21.2 billion compared to $24.7 billion in December, a 14 percent decrease. The average discount for price-reduced homes continues to hold at 11 percent off of the original listing price. This was also the second straight month where inventory levels have dropped for single family homes and condos across the United States.

This is the lowest level of total deductions since the the metric was established in April 2009.

Its important to note that this isn’t a loss in home equity, but the discount off of what sellers would like to sell their properties for in aggregate. The decline in this metric suggests that sellers are either adapting to the new market by pricing closer to market or they are less resistant to buyer demands. In other words, the rising demand for housing since early 2009 has created less incentive for sellers to capitulate. However, make no mistake – housing remains weak.

IMHO, I think its a combination of both but more of the former (pricing more accurately).

Luxury Market Acid Reflux
What is not surprising at all, is that the aggregate discount for luxury properties (>$2M) is actually rising. They account for 2% of all listings on Trulia, but account for 24% of the total dollar declines. Therefore one would assume that if luxury listings were excluded from the mix, the month over month decline in aggregate listing discounts would be substantially less.