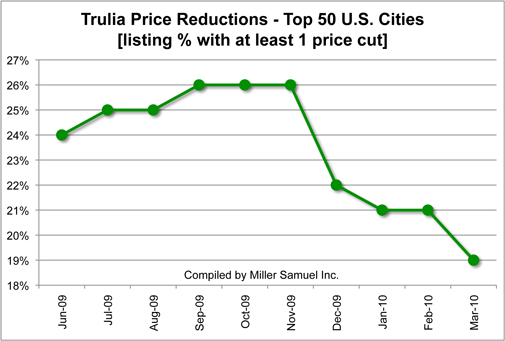 The report suggests that sellers are being more realistic [3] when pricing their homes. Over the past year, the rate of price decline began to ease and actually stabilize in certain housing markets. Prices stabilized, largely because sellers finally began to adapt to the new (lower priced) market.

I wouldn’t be surprised if this discount trend begin to expand again in the coming months as sellers enter the spring housing markets with more optimism after a higher level of activity at the end of last year. The tax credit continues to play a role in the higher level of demand. As Trulia builds history on this report, I’m interested on seeing what seasonal patterns there are.

Unemployment remains at very high levels and credit remains very tight. I don’t this see this trend suggesting a housing recovery – its more of a sign that we are leaving surreal market conditions of 2009.

a new all-time low for national home price reduction levels since the company started tracking in April 2009, with 19 percent of listings currently on the market in the United States as of March 1, 2010 experiencing at least one price cut. This represents a 10 percent decrease from the previous month and the first time price reduction levels have dropped below 20 percent. The total dollar amount slashed from home prices dropped to $21.6 billion and the average discount for price-reduced homes continues to hold at 11 percent off of the original listing price.

Of the 50 largest US cities… 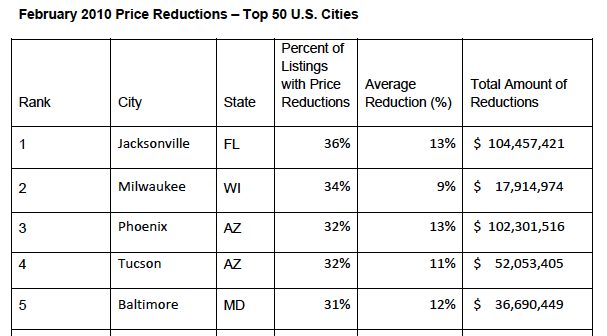 The percentage of U.S. homeowners who cut the listing price on their houses fell in February to the lowest level in 10 months, as initial pricing became more realistic heading into the spring selling season, real estate web site Trulia.com said on Tuesday.