Westwood Capital, LLC [1], an investment bank, led by founder and managing partner Dan Alpert, projected that housing prices would decline by 28.2% from peak based on the Case-Shiller Index as a benchmark. Arguably pessimistic at the time, the 43% decline that actually occurred was a lot more bleak.

Westwood just released a compelling research piece called Reconstructing American Home Values [2] which suggests we are 75% of the way through the decline.

Here’s a few of the salient points presented:

To firmly return to the upper limits of historically justifiable levels of stabile prices relative to rents in particular, we believe the Case-Shiller 20 markets must decline, on average (with considerable differences among markets), by an additional +/-16.9% from May 2009 levels.

In the final years of the housing mania of the 2000s, home buyers not only assumed the price they paid would rise to the moon; they paid more than 50% of their homes’ purchase price toward what was effectively a wildly overpriced option on that presumed growth, relative to the portion that could be reasonably attributed to the cost of shelter. They not only massively overpaid that option; they were also leveraging themselves to the teeth to do so. For the entire period from 1997 through the bubble’s peak in 2006, housing prices in the Case-Shiller 20 metropolitan statistical areas rose by a total of 163.8% before inflation, and 107.6% after inflation is taken into consideration!

In other words, in addition to the cost of shelter, the housing bubble was caused by an irrational jump in the cost of an option [3] to purchase a property’s future price appreciation. The report concludes that that the future appreciation portion of the value equation was over valued by at least 50%.

I also like the discussion on rent v. sales price disconnect that began in 1997.

A big concern going forward is rent deflation, which is already occuring as many “For Sale” properties are becoming rentals due to the lack of demand.

Here are a few of the charts that interest me from the report: 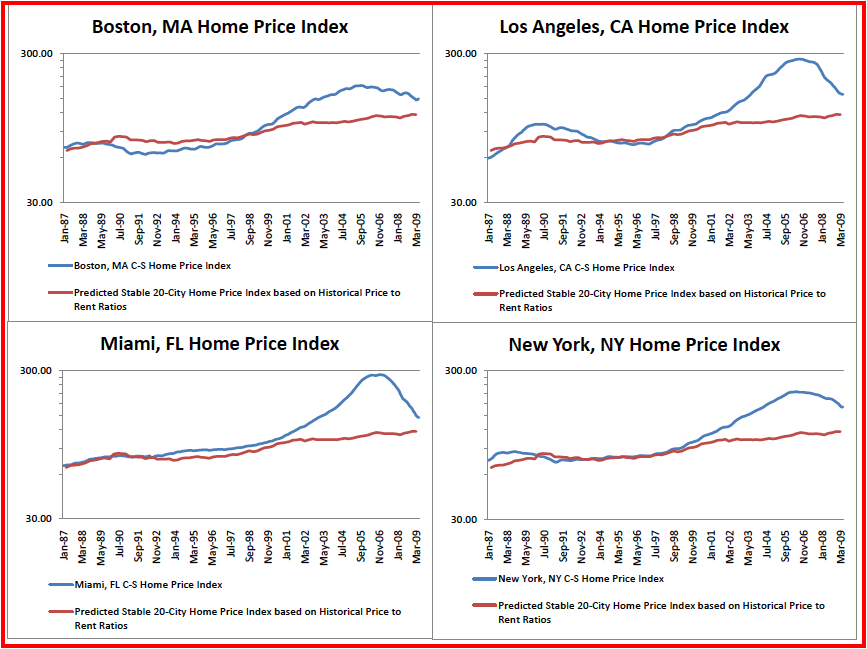