There is a lot of controversy, inconvenient truths and discussion about going “Green” (no, not Favre signing with the Jets [1]). One of the key elements of discussion is the economic impact of climate change.

The Federal Reserve Bank of San Francisco’s economic letter [2], discusses a paper on Regional Variation in the Potential Economic Effects of Climate Change [3] by Butsic, Hanak, and Valletta. 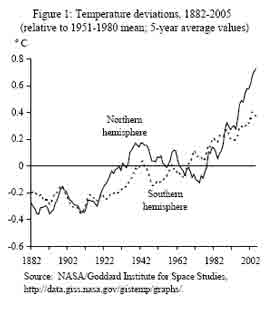 Here’s an interesting chart in the Fed posting covering the increase in temperature:

The continental US has a 100 degree F range of temperatures on some days. The impact will be greater in areas already on the edge of tolerance.

One of the key bases for variation in the potential impact of climate change across geographic areas is the starting point from which climate change occurs: climate warming may have little or no impact within a range of temperatures, but the impacts may grow rapidly as temperatures rise above that range. This nonlinear or “threshold” pattern implies that climate change effects will be most pronounced for areas that are already near critical temperature boundaries. This principle is best illustrated by some examples from recent research on the potential economic effects of climate change. 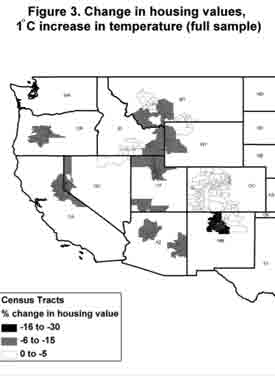 Shifts in agriculture production are most pronounced, not much impact on mortality rates. The article zeroes in on winter sports and it’s impact on resort housing.

Some markets are hurt more significantly than others. My take away is that the issue can’t be looked at as a matter of degrees (no pun intended) of impact. There appears to be some sort of tipping point to which the study suggests market prices are hurt significantly in different regions depending how stressed they are by temperature ranges already.