In the Lewis and Parrish article Economic Addiction [Barron’s] [1] their premise is that “for decades, desparate people have turned to 12-step programs to overcome their addictions to alcohol, drugs, overeating or even sex.”

The question facing incoming Federal Reserve Chairman Benjamin Bernanke is how many steps will it take to recover from an addiction to easy money?

They contend that the bond market is tempting the Fed to ignore warning signs of inflation. The Fed has limited options if inflation does appear because of such low rates. They content that Bernanke, because of his “inflation targeting” will be more focused on inflation than Greenspan.

The authors suggest that energy prices will affect core inflation [MarketWatch] [2] and housing too.

Higher housing inflation is a certainty: Owners’ occupied-housing costs, nearly 30% of the core consumer-price-index basket, are calculated using rents, which are moving up as higher rates dampen the ownership boom. 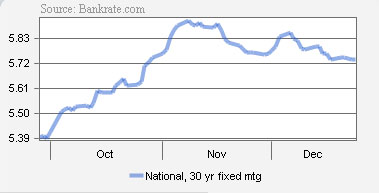 Thats an interesting take and a bit gloomier than I would have thought. While rents are likely to move up as mortgage rates rise, mortgage rates have been largely docile for the past two months. The authors seem to assume that housing prices must fall if they are not rising, with no option for more modest increases or even a sideways move. The dramatic metaphors make for an interesting read as well (just mention sex in the same sentence as economics and I pay attention).

This all or nor nothing stance has been one of the characteristics of the housing commentary and media coverage which has been more pronounced than in the last cycle.